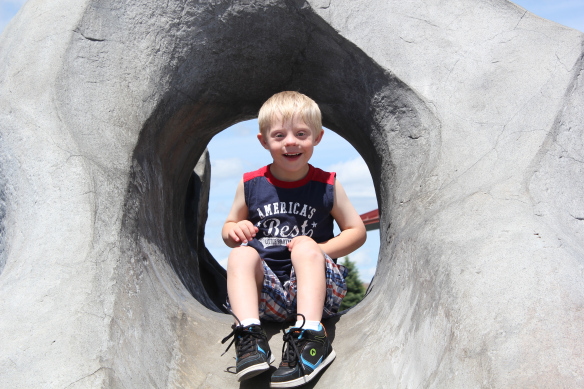 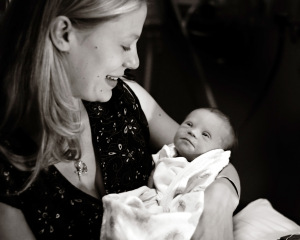 Aaron and Amy Vawter were eagerly awaiting the arrival of their second bundle of joy. Already parents to Micah, then 18 months, the couple went to have the routine 20-week ultrasound for baby number two when doctors discovered some frightening problems with their baby’s heart. They were referred to a specialist at Seattle Children’s Hospital, where the prognosis for their baby only worsened.

“They could only see three chambers of his heart,” explains Amy, “three days of testing, hours of ultrasounds head to toe with three hours spent just on his heart. And at the end of it all they were telling us that this baby had so many problems, there was a zero percent chance of survival.”

The Vawters’ unborn son had severe heart defects including hypoplastic left heart, which means the left side of his heart was too small to support life. He also had a hole between the top chambers of his heart (complete atrioventricular canal) and a hole between the bottom chambers. The two valves in the middle of his heart were fused into one leaky valve. His aorta was also underdeveloped, and doctors said it was too small to supply enough blood to his body. But in addition to his heart problems, the baby had two clubbed feat, a missing nasal bone, fluid around his kidneys, and enlarged ventricles in his brain.

Devastated, the couple listened as the cardiologist told them about four open heart surgeries that could be done to attempt to fix the problems. But still, the prognosis was not good, and it would be worse if tests came back positive for Down syndrome. The doctor informed them that of the ten babies with hypoplastic left heart and Down syndrome who had been born at Seattle Children’s, none had survived. “If it was just the hypoplastic, then it was fixable,” says Amy. “So with all the problems combined there was nothing to do. Doctors told me, ‘You’re young. You can try again. There’s no reason to put yourself and your body through the rest of the pregnancy.’ We said no, we don’t believe in that. We’re going to carry this baby for as long as we have him.”

But the doctors didn’t table the abortion discussion. When Aaron took Micah out of the room for a break, the doctor turned to Amy and said:

After an amniocentesis and further testing, it was discovered that the baby did indeed have Down syndrome. This sealed his fate, according to Amy. Doctors reminded the couple that any child with Down syndrome and severe heart defects would not survive. Because Amy and Aaron were against abortion, a doctor offered another option – inducing early labor at 28 weeks, when the baby would be too young to survive.  But Amy knew that that was the same thing as abortion.

The Vawters soon found themselves switching to a Catholic hospital in Spokane, WA because it was closer to family and their support network. The doctors there didn’t once pressure Amy to abort, and she says she was very happy with their attitude toward her and her baby. Still, Amy and Aaron were scared for their son. From her blog:

Over the next several weeks, we mourned the loss of our baby. We sobbed, we prayed, and eventually we came to accept the situation. We felt as if we had already lost our son, yet we longed to hold him. We prayed that we would be given a few moments with him before he died. My husband said, ‘If all he ever knows is that he’s loved, that will be enough.’ Our family and friends were all on their knees, too, and somehow this gave us some comfort in the midst of the thick fog of our grief.

We named him Matthew, meaning “gift of God.” His middle name would be Nicholas, for St. Nicholas of Tolentino, the patron saint of dying babies. We really didn’t expect a miracle or even dare to pray for one. We just hoped to hold our son.

Despite the poor prognosis and lack of hope, as the pregnancy went on, ultrasounds showed that the problems with the baby’s kidneys and brain had improved, and the left side of his heart had even grown. This improved his chances for successful surgery after birth, but it was still wait-and-see.

Then, at one of the appointments, doctors discovered that Matthew’s heart rate was dropping. Amy and Aaron drove to Spokane for an emergency C-section. Matthew was born at just over four pounds, and, to the delight of his parents, he was alive. The left side of his heart was still too small to support life, and while he could have surgery, the cardiologist said that it wouldn’t improve his chances. So the couple opted to take their baby boy home with the knowledge that he mostly likely wouldn’t live longer than three months.

Matthew spent his first months of life on and off oxygen and feeding tubes, occasionally strong enough to eat from a bottle. Around four months old he became more active – smiling and giggling. Then at six months old, the Vawters brought their son in for a check-up.

“They were astounded,” says Amy. “The cardiologist said, ‘Sometimes we speak of miracles in a casual sense, but this is a true miracle. We’ve never seen a heart grow and repair itself the way this one has.’”

It turned out that the left side of his heart and his aorta had both grown to normal size. This meant that doctors could perform just one surgery in order to patch the two holes in his heart, and this would give Matthew a full life expectancy. All the Vawters needed to do was help Matthew gain some weight. 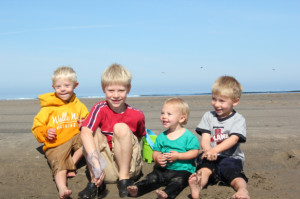 At eight months old, weighing just ten pounds, Matthew went to the hospital for his one and only heart surgery. A pre-surgery scan of his heart showed that the hole between the bottom two chambers had closed on its own. Now doctors only needed to close the one hole. After four days in the hospital, Matthew and his family returned home, where he was more active than ever before. As Amy says, he “has been a little champ ever since.” As for the doctors, they now present Matthew’s case at medical conferences.

Today, Matthew is a typical seven-year-old boy, and he and Micah are now big brothers. Amy homeschools the children, and Matthew is learning to read, with about 40 sight-words under his belt. He loves animals of all kinds as well as cars and trucks. He loves to sit and look at books, ride horses for therapy, snuggle, and take care of his little sister. Amy notes that Matthew’s heart is so healthy that he is now able to go two years between cardiology checkups. “He loves taking care of anybody, really,” says Amy. “He loves to help clear the dishes, set the table, and help bring people things they need. He loves to be the helper. He feeds the chickens. And he learns at his own pace, but his speech gets better all the time. […] We don’t even think about where we were six years ago. It seems like a different life. He’s healthy and happy and active and hilarious!”

Matthew’s miraculous story has been reaching far and wide. Just this month he was featured on the website What to Expect, reaching millions of readers. Because of this, Matthew is helping to change our culture, showing people that everyone deserves a shot at life and that everyone’s life has value. Parents who are receiving a diagnosis for their unborn child can find hope for their baby through Matthew’s story.

On her blog, Amy recalls that one of Matthew’s prayer warriors, Benedict, prayed that Matthew would live “so that others could see the glory of God through him.” It seems that’s exactly what’s happening. As Amy says: Amy wants all parents of children receiving such a diagnosis to not give into fear. She says, “It might not be what you expected, but it’s beautiful. It’s not always easy, but it’s always worth it.”