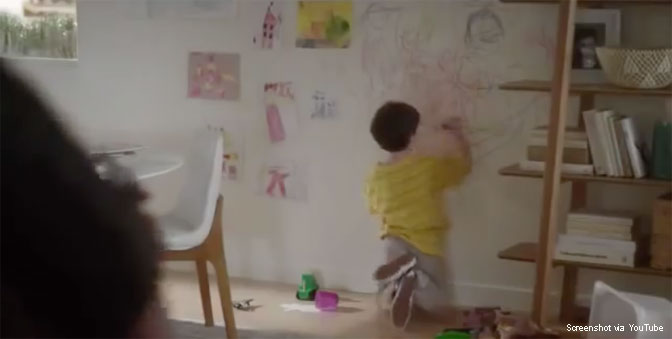 It can be rough to be a parent to young children. They test your boundaries, break your stuff, and push your patience — but that doesn’t mean you would wish to go back in time and never have those children, or perhaps abort those children, does it?

DirecTV thinks it does, and that’s upsetting some viewers.

In a new commercial featuring Jon Bon Jovi, DirecTV uses a couple with two children to announce their new feature – the ability to watch shows that aired up to 72 hours ago even if you forgot to record it. It’s a great feature. However, one comparison they drew in an attempt to be funny, doesn’t have people laughing.

“You see we got the power to turn back time,” sings Bon Jovi after the parents realize they missed a favorite show. “That show you missed, let’s just go back and find. And let’s go back and choose spicy instead of mild [referring to salsa]. And maybe reconsider having that second child.”

As he sings “second child” a young boy coloring on the wall disappears. The parents look relieved.

Are children really just material possessions to us, comparable to salsa? (And maybe the kid wouldn’t be coloring on the walls and causing so much trouble if the parents were paying attention to him instead of watching TV. Just a thought.)

Children are not invaluable line items in our day to day lives. They aren’t a distraction from what’s important. They are what’s most important, and they are certainly much more important than a TV show. They are a parent’s main vocation. We are raising adults, not just babysitting until our offspring finally go off to college.

The abortion industry deceives people into believing that preborn humans have no value; that their lives are meaningless and replaceable; that you can have another baby at another time and be happy with that.  But the child who’s being erased – whether on a commercial or in an abortion – will never be replaced because there will never be another him or her. Never anyone with that same DNA, the same hopes and dreams and likes and dislikes that that particular person had and would have.

This commercial is just the most recent example of how little we as Americans value human life. We’d much rather be wrapped up in our TV shows and social media than pay attention to our children – to the point where we want to wish our own children away. It’s no wonder so many young women try to hide or kill their newborn babies. What’s the difference between that baby and the one that was in their womb moments ago? And to DirecTV – what’s the difference between that disposable baby in the womb and the 4 year old coloring on your walls?

Every life matters. And parents need to step up and stop putting everything – all of their wants and desires – ahead of their children. Maybe then, commercials like this will disappear.