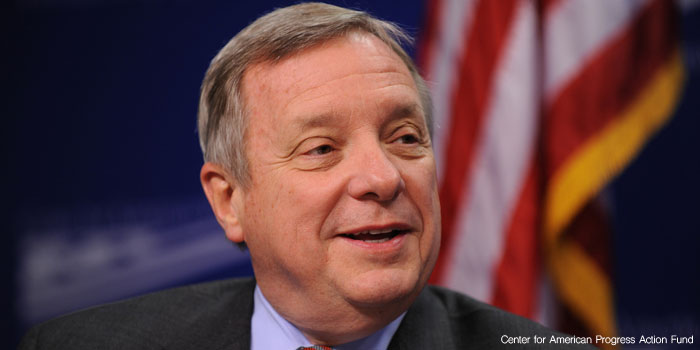 There are many notable Catholic politicians who support abortion: Nancy Pelosi, Tim Kaine, Joe Biden, and Dick Durbin, to name a few. The right to life is sacred in the Catholic Church, the “first and most fundamental of human rights” for Catholics, according to the United States Conference of Catholic Bishops. For Catholics, abortion is never permissible, and yet, pro-abortion politicians mostly seem to escape criticism despite defying Church teachings.

That may finally be changing.

Bishop Thomas Paprocki serves as bishop for the Diocese of Springfield, to which Senator Dick Durbin belongs. Last month, the Senate voted against the Pain-Capable Unborn Child Protection Act, which would have banned abortions after 20 weeks of pregnancy. Durbin was one of 14 Catholic senators who voted against the bill. In a statement, Bishop Paprocki condemned the vote as “appalling,” and recalled a 2004 statement from Msgr. Kevin Vann, Durbin’s then-pastor, announcing that he was reticent to allow Durbin to receive Holy Communion. Paprocki announced that he will be upholding this decision.

Citing Canon 915 of the Catholic Church’s Code of Canon Law, which states that those “who obstinately persist in mani­fest grave sin” should not be permitted to receive Holy Communion. He also cited the 2004 USCCB statement, Catholics in Political Life, which says, “Failing to protect the lives of innocent and defenseless members of the human race is to sin against justice. Those who formulate law therefore have an obligation in conscience to work toward correcting morally defective laws, lest they be guilty of cooperating in evil and in sinning against the common good.” Paprocki wrote that because of his support for abortion, Durbin cannot be allowed to receive Holy Communion:

Because his voting record in support of abortion over many years constitutes “obstinate persistence in manifest grave sin,” the determination continues that Sen. Durbin is not to be admitted to Holy Communion until he repents of this sin. This provision is intended not to punish, but to bring about a change of heart. Sen. Durbin was once pro-life. I sincerely pray that he will repent and return to being pro-life.

Durbin’s office said he had no comment to the statement. But there is no graver offense in the Church than threatening the right to life. Durbin — and all Catholic politicians — should reconsider their pro-abortion positions, repent, and protect the lives of the innocent and the vulnerable everywhere.