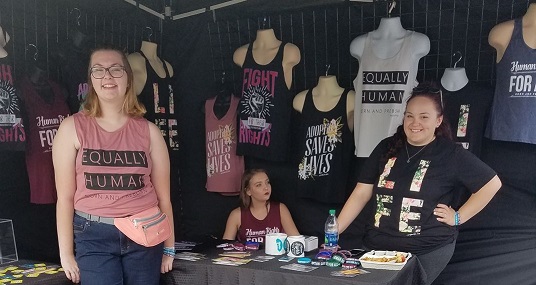 Despite criticism from pro-abortion bands and pro-abortion attendees, Vans Warped Tour has welcomed the pro-life non-profit Rock for Life back for a second year. The national concert series runs throughout the summer and allows a variety of non-profit organizations to set up tents, including Planned Parenthood.

“I grew up in punk rock in the ’70s and ’80s. We were OK with having people with conflicting views in the same room,” pro-choice Warped Tour founder Kevin Lyman told Spin. “If we don’t allow people of varying opinions in the same space, we’ll never fix the problems in this country. That’s why I’m doing this.”

Rock for Life, a part of Students for Life of America, works for human rights for all humans, born and preborn, through music and education. They first joined the Warped Tour in 2016, handing out information and selling t-shirts and other merchandise. Their inclusion in the 2016 tour caused a stir on Twitter.

an environment so unwelcoming to women is literally teaching teens abortions are wrong. when did mall pop-punk become fascism?

yikes… please @VansWarpedTour, don’t let these people back in for any further dates.

@rockforlife Warped gets worse as worse. Another group brainwashing young women into believing their bodies aren’t their own

The controversy is one of the reasons Lyman wanted Rock for Life back, telling Spin that it “strengthened his resolve” to include groups that have differing opinions.

“I go to the booth, and I see people talk to them,” Lyman added. “They’re really promoting adoption, and other things besides abortion. I’m adopted. I’m not supporting them, but they can have the spot. They’re not hassling people.”

In another interview, Lyman revealed that despite being personally pro-choice, “I’m sure glad that someone took the option to have me adopted versus an abortion.”

Rock for Life is happy to be a part of the Warped Tour where they can reach young people who often are misinformed or uneducated about the truth of abortion and fetal development.

“Many young people that we talk with, even at Christian festivals, are either undecided on abortion or are not pro-life, so reaching them at this crucial stage of figuring what they believe and why it is important. By presenting them with a positive pro-life message in a relaxed environment, we can start making a difference in their lives – and hopefully many others,” Rock for Life director Erik Whittington said last year.

Throughout the summer, Rock for Life is seeking assistance from pro-lifers local to Warped Tour events. Including the need for homes to host their team, Rock for Life needs pro-life volunteers to attend the festival to help them educate the public, promote the group’s presence at the events through social media, and provide them with food.