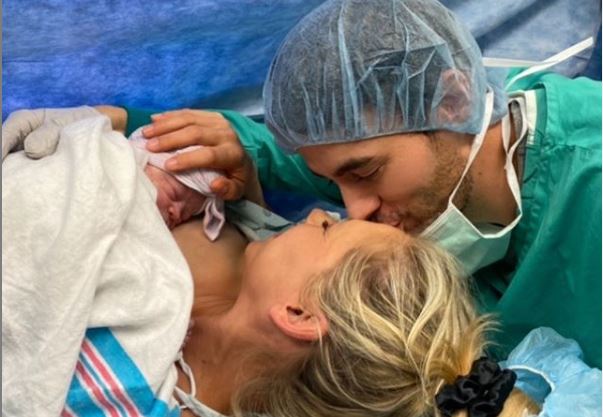 Enrique Iglesias has announced the name of his five-week-old daughter with partner Anna Kournikova. The baby girl is the third child for the couple, who began a relationship in 2001 when the former tennis player appeared in Iglesias’ music video for “Escape.” Though the pair has never officially announced an engagement or marriage, Kournikova recently updated her Instagram profile name to Anna Kournikova Iglesias, sparking speculation that they had tied the knot.

Already parents to two-year-old twins Lucy and Nicholas, the couple welcomed their third child, a baby girl, on January 30, 2020.

Both Enrique and Anna posted images of themselves on Instagram holding their new addition, with Iglesias captioning the first picture of him and his new daughter, “My Sunshine.”

Iglesias, who recently announced a tour with Ricky Martin, told People Magazine last week that their new baby’s name is Mary, or Masha in Russian, which will be her nickname. He also said that her older siblings are doing very well with the transition to having a baby sister.

“They actually love it,” he told People. “There’s a two-year difference, so I was a little scared. I was like, ‘How are they going to react?’ And I have two dogs so my house is chaotic. When we first came home with Masha, I was like, ‘Oh, how is everybody going to react?'” He added that it can be hard being a father to three young children while being on tour.

“It’s tough. It’s tough,” he said. “Obviously, we’re fortunate enough that if we want to do it, we can do it.” He later added, “You’re not going to separate me from my children.”

On the road again… 📸@alansilfen

Iglesias and Kournikova are good at keeping their private lives private. Their pregnancy with the twins was kept under wraps until after their birth in December 2017. And while it is unclear if they are married, they have long said they wanted children.

“I absolutely want to have children, whether I have my own or adopt,” Kournikova said in 2011. “I love taking care of people.” In 2007, Iglesias predicted she would one day be “an ideal mother.”