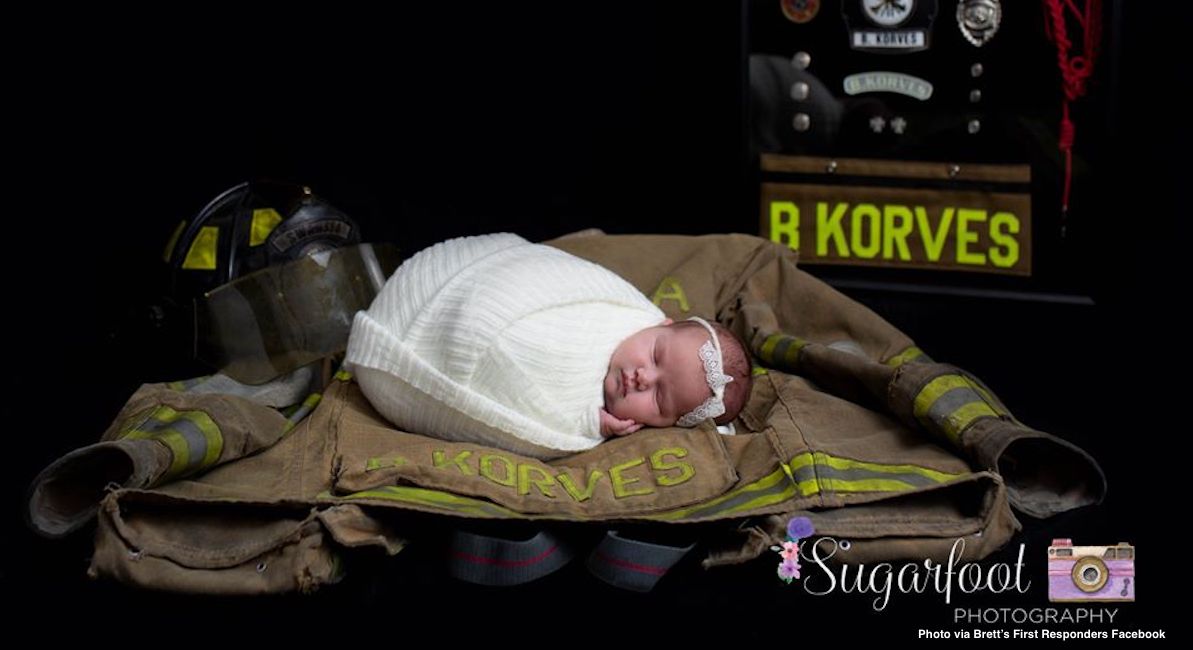 In April 2019, a tragedy occurred when 30-year-old firefighter Brett Korves of Swansea, Illinois, was killed in a car accident on his way to work. Korves left behind his wife, Alex, and their young son, Brock. However, weeks after Korves death, Alex discovered she was pregnant with their second child. Dumbfounded, Alex doubted she could handle this new life without her husband.

“At first, I’m not going to lie. I was freaking out… I was very excited to have just one more piece of Brett, but I was also very nervous to do this by myself,” Good Morning America reported. Upon her daughter’s birth, Alex named her baby Brett Grace, in honor of her late husband.

We expected two or three guys to show up, and then we would just take a couple of quick pictures before going to my studio. But that morning we showed up and 26 of them were there, smiling and ready to go…I figured we were onto something special.

The photographs show the beauty of new life even in the wake of tragedy. In one photo, Brett Grace is seen resting on her father’s firefighting gear, and in another she is cradled by her firefighter grandfather, Lieutenant Jack Korves. In another, her older brother Brock carefully holds her as they sit on the back of the station’s firetruck.

Also in honor of Korves, his siblings, Kayla Bishop and Todd Korves, formed the Brett’s First Responders foundation as a way “to help families of first responders who were not injured in the line of duty and develop a scholarship program for people seeking to become firefighters.”

Because of the fire department’s tremendous support and care directed toward the Korves family after Brett’s death, Alex commented, “I just want Brett Grace to realize that even though her father has passed … she has all this outpouring support from all these men, too.”

Indeed, the inspiring actions of the Swansea Fire Department speaks to the preciousness of human life at every stage.