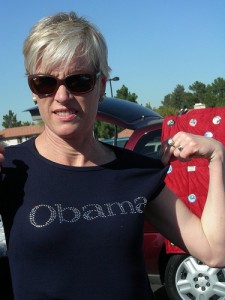 The love is mutual between Planned Parenthood CEO Cecile Richards and President Obama.

President Barack Obama is a remarkably skilled individual. Since taking office, the president has demonstrated time and again that he has an impressive talent… for dodging consequences. Seriously, it’s like watching Neo dodge karate chops in The Matrix–they just slide on past him.

This hasn’t been due to any shortage of scandals, of course. There was the “Fast and Furious” debacle: an “intelligence” operation in which the Obama Justice Department had gun dealers sell hundreds of weapons to Mexican drug cartels. That these firearms would be used to commit homicides was apparently not an issue.

Then there were the IRS abuses, which saw federal agents harass Obama’s political opponents. It’s also hard to forget the phrase “if you like your plan, you can keep your plan,” especially if you were one of those who, it turned out, couldn’t keep your plan. And now we have revelations coming out of the Veterans Administration that scores of vets died after being denied care. Naturally, these facts were promptly covered up. Aside from holding a couple of press conferences, President Obama hasn’t said much about the topic. He did have White House Chief of Staff Denis McDonough assert that, “Nobody is more outraged about this problem right now.” I suspect that the families of those veterans would disagree.

What’s impressive here is not the number of scandals so much as the uncanny ability to get away with them. While the poll numbers for presidents Bush and Truman languished in the twenty-somethings at the low-points of their respective presidencies, Obama is still holding strong with a forty-four percent approval rating. The president doesn’t deserve all of the credit for this, of course; it helps to have a sympathetic media. But while Team Obama has at least received glancing blows for the problems listed above, there’s one scandal that they’ve managed to keep largely off the radar.

Some volunteers openly presented themselves as sex traffickers employing child prostitutes. Although most people would be disturbed by the thought that pimps are coming to them for help, the staff at these facilities seemed largely unconcerned. One of them, Amy Woodruff, explicitly offered to set up involuntary abortions for underage foreign children who “can’t speak English” and “won’t know what’s going on.”

Other lowlights included footage of Planned Parenthood staff explaining how to commit perjury and cover up sexual abuse. Live Action has created a new website documenting these events.

What was President Obama’s response to all of this? After Live Action released the videos, Obama remarked that, “So, you know, my bottom line is, that uh, I think that Planned Parenthood in the past has done good work. If there was a specific problem at this center, it should be addressed.”

The president then went on to “address” this “specific problem” by defending the half a billion in tax dollars that Planned Parenthood receives. What he did not do, however, was have Attorney General Eric Holder investigate the organization, in spite of the fact that it’s a federal offense to facilitate sex trafficking. Also left uninvestigated is evidence that the group has helped sex offenders conceal their crimes: multiple cases have come to light in which abusers forced their victims to go to Planned Parenthood for abortions, with the abuse sometimes continuing for months thereafter.

Although President Obama isn’t running for another term, that’s not the case with many of his friends on Capitol Hill. Pro-abortion senators like  Kay Hagan (NC), Mark Udall (CO), and Mark Begich (AK) should be asked the hard questions for their defense of Planned Parenthood, while Americans should also demand that their tax dollars not be used to subsidize abuse. Like the president, Planned Parenthood has done an excellent job of dodging repercussions. It’s time to make sure those consequences stop sliding by.