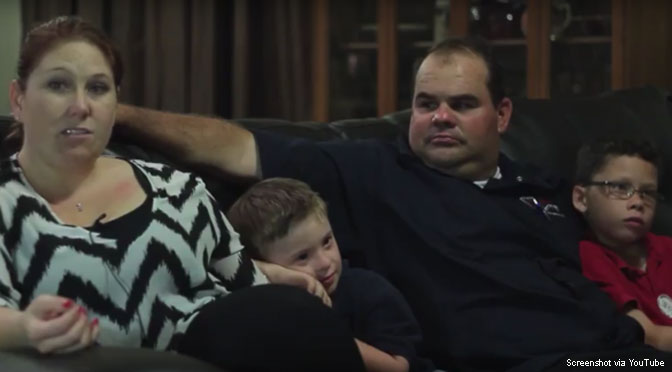 Seven-year-old Carter is showing the world that he has every right to be alive, despite the fact that abortion advocacy groups consistently fight for mothers’ rights to kill children like him.

In a video for DownSyndrome.Love, Carter’s mom Sadie explains the miracle of Carter’s life and how no one can ever tell her that he isn’t a blessing.

Carter was conceived in rape. This alone would cause abortion advocates to push his mother towards abortion. However, Sadie didn’t discover she was pregnant with Carter until she went into the hospital to have a hysterectomy due to uterine cancer. Her oncologist told her that she would not be able to carry to term because of the cancer. Abortion advocates would say that ending Carter’s life was necessary not only because of the rape, but because his mother’s life was in danger. But Sadie refused abortion. Carter plays with his brother at the playground (Screenshot via YouTube)

“And I was still pregnant,” Sadie says in the video. “And I had my oncologist, ironically was the doctor on call when I went into labor and had Carter. And I had him come back in that room and tell me he was wrong.”

In addition, while pregnant, Sadie was told that there was a strong chance her child had Down syndrome – another reason pro-abortion groups (and even some so-called pro-lifers) say abortion is acceptable. However, Sadie didn’t see it that way. Since his birth, Carter has been a light in his family’s life, and has shown them miracle upon miracle. He was born with a heart condition that was supposed to kill him. He had skull fractures and bleeding on the brain which left no long term effects on him. He has survived RSV, pneumonia, and lung conditions that they were told would stop his lungs from growing. At age seven, he is completely healthy and not on a single medication.

But besides his medical miracles and being a gift to his family, Carter has helped other people too. One day, he accidently made a phone call while playing with Sadie’s phone. He spoke to the woman who answered the phone and afterwards, the woman called Sadie back. She told Sadie that when Carter called her she had just taken a pile of pills in order to end her own life, but that Carter sounded just like her son who had recently died and who had Down syndrome. She asked if Carter also had Down syndrome and Sadie spoke with her on the phone while the woman drove to get help. Carter’s unintentional phone call saved that woman’s life.

Abortion advocates may say that anyone conceived in rape should die through abortion. And they may say that any preborn child who exists while their mother’s health is suffering should die as well. And they may also say that anyone with disabilities should be killed before they are born. But Carter — one little boy who has made a world of difference to his family, doctors, and strangers alike –proves all of those people wrong.