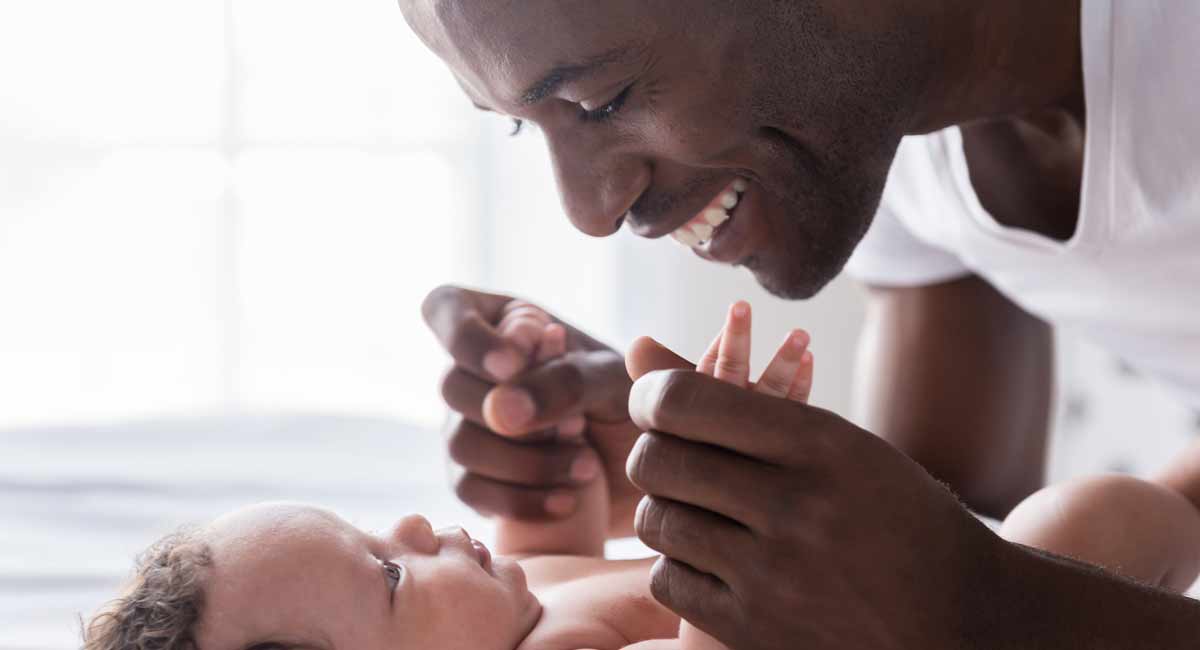 “It’s crazy incredible,” said Rebecca Tharp, True Care Women’s Resource Center’s program director. “Maybe it’s the comfort of being in their own home or this group of couples I have right now, but it’s so cool to see – the dads are coming out of their shells. They are crazy involved!”

Because of COVID-19, in April, True Care suspended in-person, in-center classes, both for moms and for dads. Tharp provided sessions on Zoom, and she believes that move helped with engagement by the fathers-to-be. She has seen greater consistency in showing up and in participating during the online sessions compared with the in-person, in-center sessions.

“There were times when the guy and gal would be sitting on the couch in the advocate room, and they’d be talking and engaged with each other, but not to this level,” she said. “They ask a lot more key questions now – it’s like they’re better focused.”

True Care began a fatherhood program in 2018 after years of trying to get one off the ground. Tharp implemented the Fathering in 15 program from the National Fatherhood Initiative, adding a 30-minute session for dad in conjunction with the center’s 60-minute Baby & Me session for first-time moms.

This year, she’s woven material from Bright Course into both programs.

“I think the content of it is really good,” Tharp said.

The dads are responding more thoughtfully and thoroughly to questions about male mentors in their lives, about job losses experienced, and to character traits they possess.

“I’ve had two dads who have completely lost jobs because of COVID,” Tharp said. “One dad thinks he’s under a lot of stress because he works a pretty low-income job, and he can’t seem to get a better job – he feels inadequate to provide for her and their baby … but he’s way excited for this baby!”

Others talk openly about their character traits and express interest in changing for the sake of their child.

“I’ve gotten answers like ‘I am really short-tempered,’ or ‘I know that I need to be more patient,’ or ‘I know that I’m quick to anger,’” she said. “Guys don’t admit things like that. In the last six months, three of my dads have responded with those kinds of answers. They feel a sense of peace to open up, and I’m impressed with their openness.”

Other topics discussed include consistency and communication.

Consistency in discipline and in being present in the child’s life and for his/her activities, including “not being on the phone screen all the time,” are other topics discussed, she said.

“I had one dad who recognized his own father in that – not being ‘present’ because of screens, and he said, ‘I could see myself doing the same thing,’” she said.

“All I Want for Christmas …”

According to the National Fatherhood Initiative, one in four children in the United States lives without a father, stepfather, or father-figure; that translates to more than 18 million American kids. The lack of dads leads to greater risks for poverty, behavioral problems, crime, and other issues.

Natrona County, Wyoming, where True Care is located, is not immune. In the county, single-parent households, teen pregnancy, income disparity, and poverty are higher than the state average, according to data collected by Wyoming Kids Count.

Tharp believes True Care’s fatherhood program, and participation by the dads-to-be, can help combat some of those community issues.

“We’re creating families, [and] God honors families,” she said. “We’re helping to make those families stronger and giving this child a better life – and that’s what it’s all about. The absence of fathers in todays’ society plays a major role in whether a child graduates high school, whether the mother and child live in poverty the rest of their lives …. [Our program] helps our community stay sound and prevents poverty within our community.”

Although many men leave the mothers-to-be, Tharp has witnessed how some want to be involved with the mothers of their children and their babies.

“I have one couple who both worked, and they took the last appointment of the evening,” she said. “He was in the background cooking while she was doing her lesson. They had the computer in the kitchen, and they’d both be engaging [with the lesson]. He would serve her, and they would eat and sit and talk through the video together. It was just the cutest thing!”

“I’m excited to have more engagement,” Tharp added. “What we had in the center was good, but not like this. I’m hoping to have more and more father involvement and engagement, even if that means continuing with online education [in the future]. I would love to double the number I’ve seen this year, and I think that’s possible.”