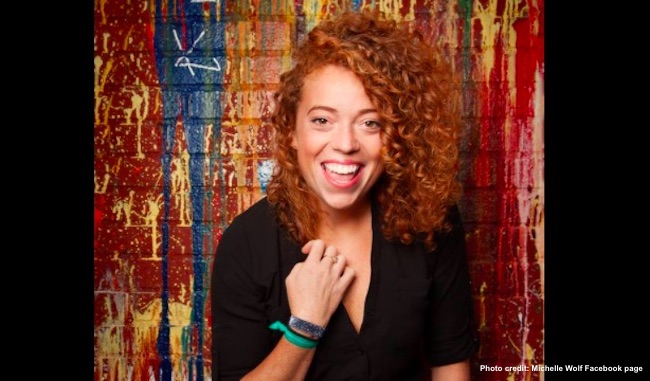 The White House Correspondents Association Dinner was held last night. Traditionally, this event is supposed to be a night of good-natured “roasting” of those in politics — but last night, it seems Michelle Wolf, who, according to Newsweek, is “a comedian and former Daily Show with Trevor Noah correspondent,” actually had people leaving the room in disgust, particularly over her comments on abortion. Newsweek reports:

Nothing was off-limits at the annual gathering of political figures and journalists as Wolf lampooned President Donald Trump’s sex life, mocked Vice President Mike Pence’s anti-abortion politics and called Sarah Huckabee Sanders a liar right to her face. At one point, Wolf acknowledged the visible discomfort in the room and joked, “Yeah, [you] shoulda done more research before you got me to do this.”

More research, indeed, especially given the heavily liberal, heavily pro-abortion slant of the Daily Show. Former Trump White House Chief of Staff Reince Priebus summed it up when he tweeted that it was “[a]n R/X rated spectacle that… ended up in the bottom the canyon.”

Some good lines. And I’m very willing to laugh at brutal jokes. I did. Some of the personal attacks on Sarah Sanders were unfunny & would never EVER be told about a Democrat in her position. Also, if you’re going to make abortion jokes, make them close to funny ? gross. #WHCD

But there really is no way to make abortion funny. Wolf said at the dinner (emphasis added):

A lot of people want Trump to be impeached. I do not. Because just when you think Trump is awful, you remember Mike Pence. Mike Pence is what happens when Anderson Cooper isn’t gay.

Mike Pence is the kind of guy that brushes his teeth and then drinks orange juice and thinks, “Mmm.” Mike Pence is also very anti-choice. He thinks abortion is murder, which, first of all, don’t knock it till you try it. And when you do try it, really knock it. You know, you got to get that baby out of there.

And, yes, sure, you can groan all you want. I know a lot of you are very antiabortion. You know, unless it’s the one you got for your secret mistress. It’s fun how values can waiver. But good for you.

Mike Pence is a weirdo, though. He’s a weird little guy….

You can read the entire transcript here, courtesy of the Washington Post.

Later, Wolf added that Mike Pence would “love” the Hulu show, “The Handmaid’s Tale,” based on a dystopian novel about a society in which women are subjugated, and which and forces one class of women to become child bearers for infertile wives in their society.

But a few things about Wolf’s comments were very revealing:

1. Wolf called the preborn child, about to be aborted, a “baby.”

It’s interesting that Wolf didn’t use the term “fetus” in her routine, as most pro-abortion individuals do, instead saying “baby,” when she was clearly talking about killing this child, or “knock[ing]… that baby out of there.” Well, Ms. Wolf, “knocking” isn’t exactly what happens. It’s more like shredding:

… And injecting with a fatal dose of a drug:

This isn’t the first time a pro-abortion individual has “slipped” and confirmed the humanity of the child in utero when we least expected it.

Remember abortionist Savita Ginde from the Center for Medical Progress video, who, upon picking through the body parts of the child she had just shredded and sucked from a woman’s womb, said, “It’s a baby”? Whoops! Not a “clump of cells” or a “product of conception.” A baby. Hear and see for yourself near the end of this video:

2. Wolf is calling the majority of Americans “weirdos” for believing that abortion kills a human being.

If the child in the womb is a human being (and science tells us that it is), then abortion is murder, and many, many Americans believe this. Does this make the majority of Americans “weirdos,” too? It shouldn’t. After all, Americans know that removing a wisdom tooth, for instance, is not murder. We know that the removal of a cancerous growth is also not murder. We know the difference between saving a life and deliberately taking one. If that makes pro-lifers “weird,” then most of us would proudly wear that badge.

Wolf also makes a point here about how abortion actually helps to protect predatory men — and I’ll bet she didn’t even know it. “I know a lot of you are very antiabortion. You know, unless it’s the one you got for your secret mistress,” she quipped.

But there is a great deal of truth in this. Some men have actually stated that their “sex lives are at stake” because of abortion restrictions. Here are some tweets from “bro-choice” (abortion-supporting) men. Many women say they have been coerced into abortions. So much for “choice.” Women are left to deal with the physical and emotional consequences of abortion, thanks to males who want to use them for sex and little else. Abortion is not pro-woman.

While Michelle Wolf might be the mainstream media darling right now for insulting the current White House administration, even she couldn’t hide the ugly truth about abortion in her comedic act.

Face it: abortion just isn’t funny, and it never will be.