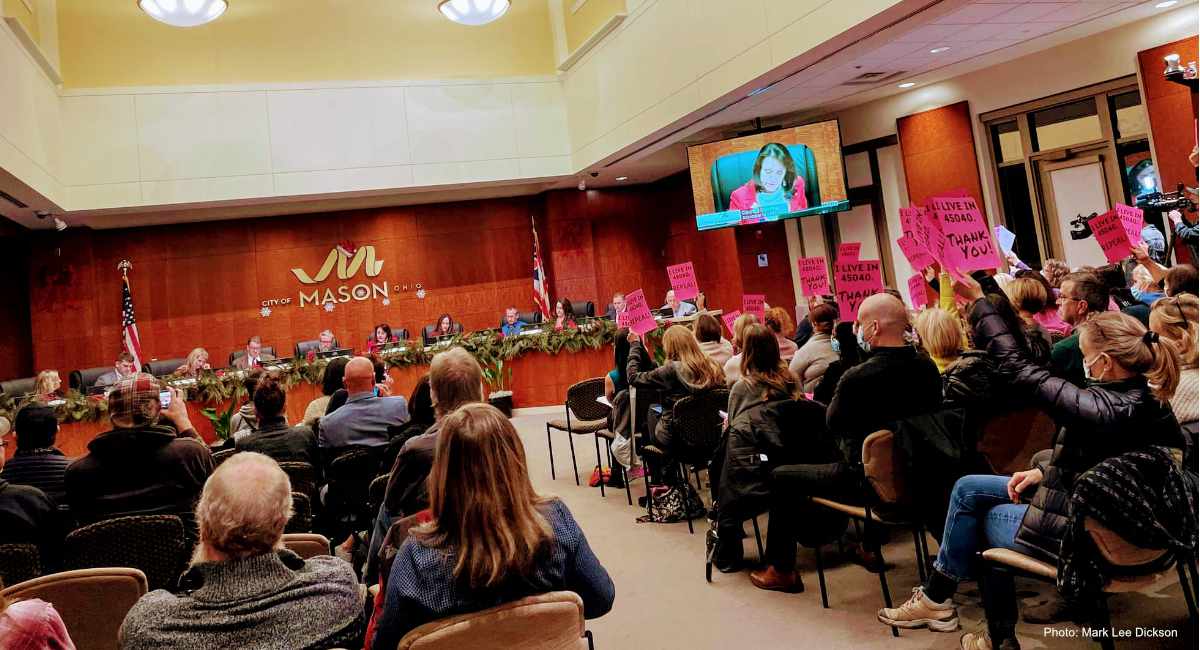 Disclaimer: The opinions expressed in this article are solely those of the author.

Newly-positioned Vice Mayor Diana Nelson argued the ordinance violated federal law and the Constitution of the United States — which were the same points she raised in opposing the ordinance before. When the Mason Ordinance Outlawing Abortion was originally passed, Nelson argued, “When local leaders begin enacting laws which are in violation of our resident’s constitutional rights we have a much larger problem.”

Councilman Tony Bradburn, who had originally voted in favor of the ordinance outlawing abortion, cast his vote for the ordinance’s repeal.

According to newly elected Mayor Barbara Berry Spaeth, the Mason Ordinance was “terribly written” and was going to “cause possible litigation.” The ACLU of Ohio appeared to see the Ohio ordinances outlawing abortion differently, however, calling the ordinances “cleverly written” and “very hard to challenge.”

The repeal of the Mason Ordinance Outlawing Abortion was a great loss to Mason’s pro-life community. “I was especially disappointed in Tony Bradburn, who ran as a pro-lfie conservative,” said Lori Viars of Warren County Right To Life. “Only Kathy Grossmann had the courage to stand up for unborn babies.” Former Mayor Kathy Grossmann was the only council member who voted against the ordinance being repealed, arguing that the ordinance on the books was a deterrent to abortions being committed within the city limits of Mason.

Currently 43 cities throughout the United States have passed ordinances outlawing abortion within their city limits and every city which did face a lawsuit has survived its legal challenge with the ordinances outlawing abortion still intact. In February of 2020, seven cities in East Texas who had passed the ordinance were sued by the ACLU of Texas and, after three months, the ACLU of Texas withdrew its lawsuit. The lawsuit did not cost the cities or the taxpayers one cent and abortion remains outlawed in every city which was sued.

Mayor Shannon Thomason of the city of Big Spring (pop. 28,862) located in West Texas shared, “We passed our ordinance in January of 2020 and have yet to see a lawsuit. The only city in West Texas which has outlawed abortion and faced a lawsuit is the City of Lubbock – and that is because they had an abortion clinic.”

While many in Mason believe T.J. Honerlaw’s support for the ordinance cost him his re-election, Honerlaw does not regret his support for the ordinance. “I have zero regrets sponsoring and passing the ordinance to make Mason a sanctuary city for the unborn. If I had to do it all over again, I would. I was beyond disappointed to see the new council and their new majority overturn it.” Honerlaw continued, “This fight is far from over as we are currently considering what steps we need to be sure Biden’s commitment to abortion access in every zip code does not become a reality in Mason, Ohio.”

While Monday was a loss for the pro-life community with the City Council of Mason repealing its ordinance, the City Council of Slaton, Texas (pop. 6,235) passed its ordinance outlawing abortion on a second and final reading — officially becoming the 43rd city in the United States to pass an ordinance outlawing abortion. More cities are expected to outlaw abortion in the near future with residents throughout Texas, Nebraska, and Ohio seeking to do their part to see a pro-life America — even if it is by one city at a time.