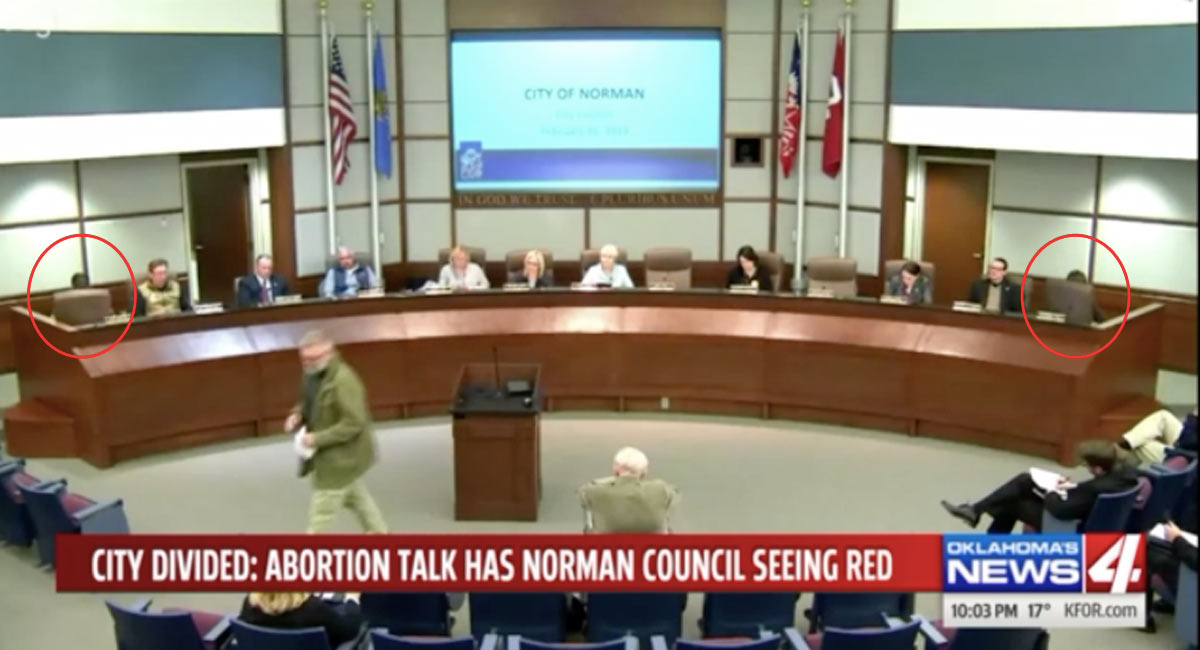 Two female city council members in Norman, Oklahoma, have made the news for their decision to — quite literally — turn their backs on a citizen who addressed the council asking that they do something to save preborn children from abortion in Norman. The two members, Kate Bierman and Alexandra Scott, turned their chairs around to face the back wall while Shane Dodson, who said he had addressed the council before regarding abortion, pleaded with the council to recognize Roe v. Wade as an unjust law (which he compared to other unjust laws that have perpetrated human injustices in American history).

Council member Robert Castleberry, however, became upset with his colleagues, and later in the meeting apologized to Mr. Dodson for their behavior. But the two women were not apologetic, and didn’t like that Castleberry had apologized for them.

Councilwoman Alexandra Scott told Oklahoma News 4 on camera, “We are a captive audience, and we don’t have to listen to hate speech,” she asserted, adding, “We turned our chairs to him because it actually had some sort of hateful speech towards women. It didn’t actually become a big issue until our fellow council member decided to scold us.”

Readers may watch Dodson’s address to the council in the video below at 1:01:43 and assess for themselves as to whether his comments can be construed as “hate speech” or “hateful speech towards women.”

Scott also told News 4 that citizens’ disapproval of her behavior was “asking me to not use my bodily autonomy to turn my chair when people are speaking disrespectfully to me,” adding that the abortion issue, for her, is an issue of the separation of church and state.

At 1:10:50 in the video, Mr. Castleberry spoke directly to Dodson, saying, “Sir, I want to apologize to you, as several members, your public representatives, turned their back on you as you addressed us. We are elected to represent you, and I am embarrassed that anybody would turn their back. Whether you agree with somebody or disagree with somebody, that is not public discourse.”

Mayor Lynne Miller also addressed Bierman and Scott’s actions. “[Constituents] have a right to expect a certain level of courtesy and decency in the way we treat everyone else,” Miller said. “We have an obligation to our public to be courteous and to be respectful and to listen, and I don’t think that’s too much to ask.”

This wasn’t the first time a female council member turned her back on Dodson. Oklahoma News 4 states that Councilwoman Sereta Wilson did so the first time Dodson and his wife spoke at a city council meeting on the same topic. Wilson wasn’t in attendance at the most recent meeting.

Dodson, for his part, told News 4 that he saw the council members’ actions as “kind of an immature thing to do…. I see that as a reminder of what I feel those women were doing figuratively, turning their backs on the most helpless among us.”