Multiple cities across the country continue to propose pro-abortion resolutions including promises to deprioritize police investigations of abortion, in the wake of the Dobbs Supreme Court decision which overturned Roe v. Wade. For example, one Maryland County has committed to providing $1 million in taxpayer dollars to fund abortion providers. Nashville, Tennessee, is also seeking to funnel $500,000 of taxpayer money to Planned Parenthood.

Houston, TX: Mayor Sylvester Turner has taken it upon himself to thwart state law and has called for the police in the City of Houston to deprioritize investigations of illegal abortions. At a press conference held late last week, Turner was joined by members of law enforcement who appeared willing to make investigations of abortion a low priority. The announcement comes on the heels of the initialization of the state’s trigger law, which protects most preborn children in the womb from violent abortion and criminalizes the commission of abortion.

“The city of Houston will not prioritize utilizing resources to create any record used against those experiencing miscarriages, seeking abortion or any other pregnancy outcome,” [emphasis added] Mayor Turner stated at the press conference. “Investigations of allegations, charges or information on pregnancy outcomes will be the lowest priority for the Houston Police Department,” the Mayor added.

A “pregnancy outcome,” as pro-life groups have previously pointed out, is a broad enough term as to potentially include even a full-term infant’s death by infanticide.

Houston’s Police Executive Chief Matt Slinkard, who stood with the Mayor when he made the announcement, said that while the police are uphold the law, “As law enforcement, we support the mayor and council and the citizens of Houston, to make sure that we enforce all laws. We will continue to do that, as we’re duty bound. But obviously, there are priorities when you have limited resources.”

Lakewood, OH: City Councilman Jason Shachner announced on Facebook, “At a Special Meeting of Council to be held on Tuesday, September 6th at 6:30 PM, I will introduce Resolution 2022-33 that will adopt the City of Lakewood Reproductive Health Care Policy. This Policy ensures that the City of Lakewood will not prioritize the use of its resources to investigate or prosecute abortion related criminal offenses and that investigations of individuals, organizations, and healthcare providers in Lakewood will become the lowest priority for investigating the seeking, receiving, facilitating, or administering of reproductive health care, which was previously protected by Roe v. Wade and its progeny. Additionally, this Policy establishes that City funds and resources will not be used to surveil, interview, or otherwise collect information on an individual or that individuals’ family members for the purpose of determining if that individual received abortion services.”

Salem, MA: In mid-September, the Salem City Council will hear an ordinance to “ensure the city of Salem protects all individuals’ access to legally protected health care services.” According to Yahoo Finance, the proposal calls for abortion services to be “confidential and shielded from records requests,” states that, “No city employee may share information, and no city resources should be spent, on efforts to prohibit, criminalize, or otherwise interfere with the delivery of such services,” and that “Salem police won’t hold anyone associated with the delivery of such services” nor “remand, transfer or extradite anyone already in custody” if sought for abortion. It adds that “Any city employee violating the policy is subject to discipline and fines at $50 for the first violation, $150 for the second and $300 for the third and beyond.”

Knoxville, TN: On September 6, the Knoxville City Council is expected to hear and vote on an agenda item supporting abortion. The City Council’s cleverly worded text disguises the term abortion, claiming that the resolution is, “affirming that all city residents should have the right to access fundamental obstetric and gynecological health care services.” But the actual document states that the “Council of the City of Knoxville” will affirm abortion as “a fundamental component of obstetric and gynecological health care,” calling upon the state legislature to “immediately decriminalize the actions of health care providers who provide abortion,” among other demands.

Tennessee Right to Life, which opposes the measure, wrote on its Facebook page, “The move is in reaction to the Human Life Protection Act becoming law on August 25 and making abortion a felony in Tennessee. The law provides for an affirmative defense for doctors in cases where the mother’s life is in danger.” 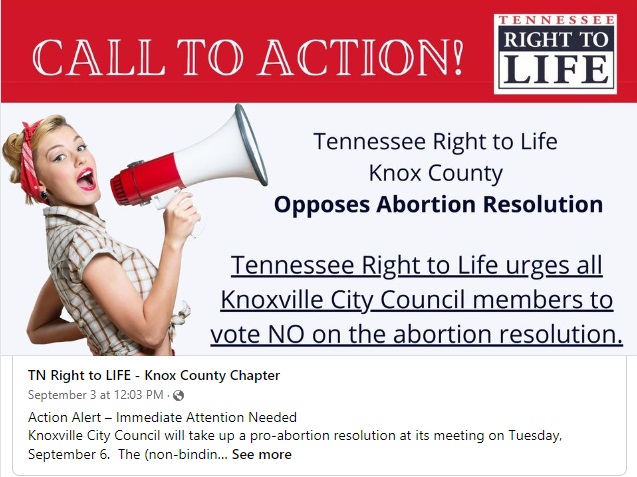 Newtown Township, PA: The Township’s Board of Supervisors has directed its solicitor to draft a resolution supporting abortion. A report from the Patch stated that “Supervisors Dennis Fisher, Elen Snyder and Phil Calabro voted in favor of the motion while Supervisor Kyle Davis voted against. Supervisor John Mack was out of town and did not attend the board’s August meeting.” The resolution is expected to appear on the board’s next agenda.

New York, NY: On September 13, 2022, Council Speaker Adrienne Adams and the Council’s Women’s Caucus announced that the “New York City Council is providing $1 million towards expanding access to abortion care in New York City. The allocation is the largest commitment of municipal funds by any city in the United States. The funding will be divided equally between the New York Abortion Access Fund (NYAAF), which supports anyone who is unable to fully pay for an abortion and is living in or traveling to New York, and the Brigid Alliance that provides logistical support (travel, lodging, childcare, etc.) for people seeking abortions.”

In September 2022, NYC Council Speaker Adams introduced 458-A which, according to the Council’s news release “would require the Department of Health and Mental Hygiene (DOHMH) to create resources in all designated citywide languages for a potential patient of an abortion provider. The bill would also require DOHMH to survey abortion providers in the city to assess the availability of language access services for abortion, the demand for such services, and any challenges for implementation. DOHMH would be required to report its findings to the Speaker and the Mayor with recommendations, including any role the City can play in assisting abortion providers with language access services, and the feasibility of providing a City grant program.”

Santa Fe, NM: The City Council just passed a resolution “supporting legislation in the United States of America and the State of New Mexico to protect the right to a safe abortion.”

Oakland, CA: On September 20, City Council President Nikki Fortunato Bas, Vice Mayor Rebecca Kaplan, City Council President Pro Tem Sheng Thao and Councilmember Carroll Fife plan to bring a resolution in support of Proposition 1 before the City Council, according to CBS News San Francisco. According to the California Family Council, the measure if approved by the voters of the state would “ensure all abortions WITHOUT limitation be protected right up to the moment of birth.”

Today, Philadelphia sends a message to the entire country: we will always stand up for reproductive justice and in defense of abortion access. Proud to stand with my sisters @CouncilmemberJG and @KendraPHL today. pic.twitter.com/cRr3vJTILW

Nashville hopes to give $500K to Planned Parenthood

Nashville’s Metro council members are “trying to get Metro Council to approve a grant for Planned Parenthood to help Nashvillians leave the state to get an abortion,” WSMV Nashville reported. The media outlet said the group has not nailed down where the funds would come from but said they are seeking a “memorandum of understanding with a community partner like Planned Parenthood.” They added, “$200,000 would go to sex education; $150,000 would go to sex supplies, like condoms; and $150,000 would help people access abortions outside Tennessee.”

The upcoming Metro Council agenda reveals that the City Council wants to grant Planned Parenthood $500,000. The measure sponsored by Council members Delishia Porterfield, Sandra Sepulveda, Emily Benedict, Ginny Welsch, Freddie O’Connell, and Bob Mendes has been referred to the September 9th Budget and Finance Committee where members will decide if they will appropriate “five-hundred thousand dollars ($500,000) from the unencumbered balance of appropriations to the Metropolitan Council Office [$100,000], Mayor’s Office [$100,000], and Nashville Department of Transportation and Multimodal Infrastructure [300,000] for the purpose of funding a grant to Planned Parenthood of Tennessee and North Mississippi.”

Maryland county intends to give $1 million to abortion providers

Montgomery County Executive Marc Elrich has announced that Montgomery County, Maryland, is committing $1 million for grants to fund abortion providers in the County, despite the fact that Maryland has not passed any pro-life measures.

A website set up for the Montgomery County funds states, “Resolution 19-1357 provides a total of $1 million for the County’s FY 2023 Abortion, Reproductive Health, and Related Services Access (ARHRSA) Grants Program with individual awards ranging from a minimum award of $50,000 and a maximum award of $500,000 for an up to one year (12 month) performance period.  The target population for this grant are women seeking access to abortion, reproductive health, and related services as well as the staff providing these services.” 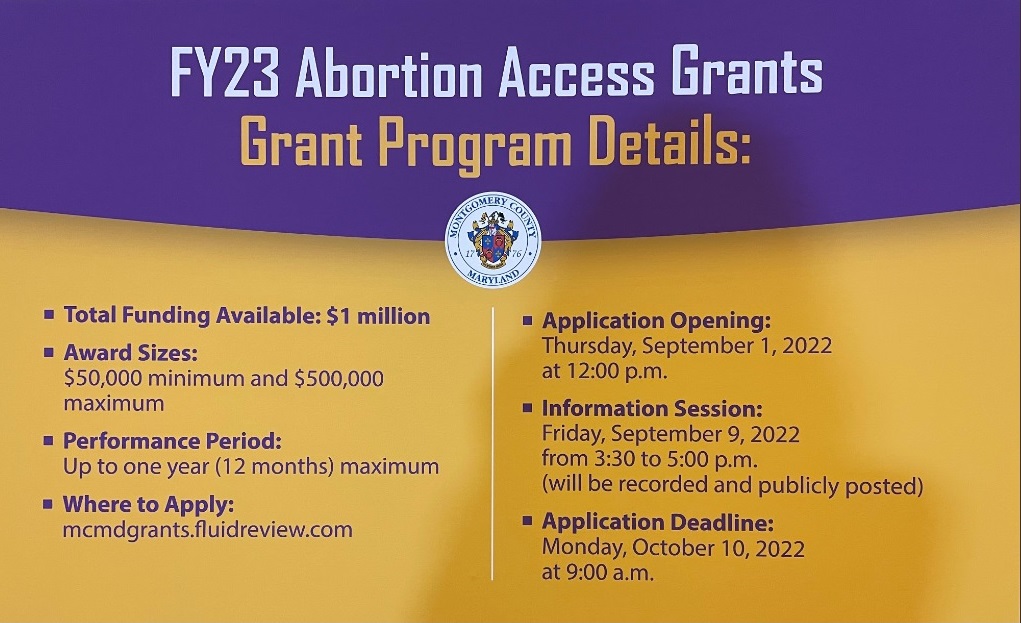 Montgomery County, Maryland sets One Million Dollars aside for abortion

The news comes as an “all trimester” abortion facility (Partners in Abortion Care) opens in the state. Founders Morgan Nuzzo and Diane Horvath are currently crowdfunding seeking $500,000 for the facility.