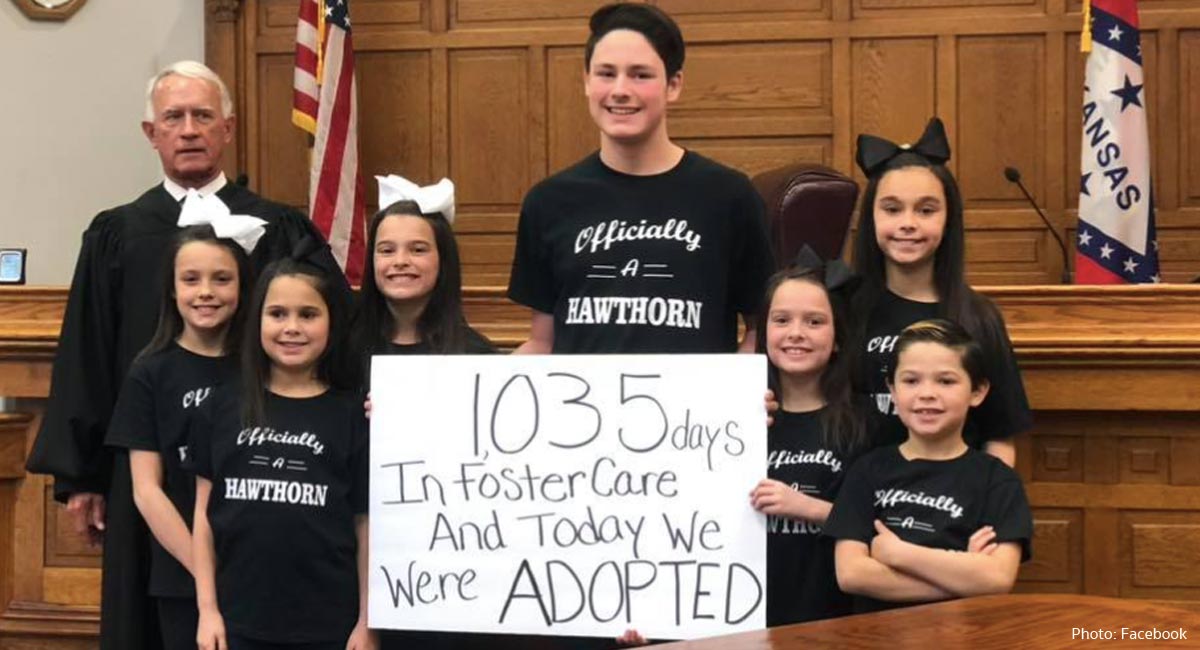 When Terri and Michael Hawthorn made the decision to become foster parents, adoption was originally not something they were considering. But now, they are grateful parents to seven children. “Our first words were, ‘ok we’ll do it for a couple of years but we will not adopt,’” Terri said. And at first, they stuck to their plan. They fostered children for a few years, but then in April of 2018, they finally decided to adopt, welcoming siblings Korgen and Haizlee into their family. But then they decided to expand their family even further, and officially adopted seven more children, who previously had to survive a difficult life.

“When I got here I was like, oh my gosh, we get our own beds,” Layna Hawthorn said, with her sister Kyndal adding, “We never got that, we had like one bed and most of us slept in the floor.” Food was originally scarce, with the siblings having to fend for themselves. “The only times we got to eat is when our neighbors would sneak us a bag of chips,” Kyndal explained. “We didn’t have a can opener, and they’d give us the cans that we didn’t know how to open. So sometimes we just didn’t eat.”

But now, the siblings — officially Hawthorns — are not only safe, loved, and well-fed, but they’re part of a real family. “It feels good to actually have a family to wake up to every morning,” Kyndal said. Before, they had been moved around between foster homes and children’s homes, and didn’t often feel loved. They sometimes dreaded going home. “These kids did not ask to come to foster care, four or five different homes, or schools,” Terri said. And they want people to know their story, to give hope to other kids who might be living in foster care as well.

“It feels so great knowing we have a family now and won’t have to go anywhere else,” Dawson Hawthorn said.

On December 3rd, their dream came true, when they were officially adopted. The Hawthorn siblings now have rooms to call their own, toys, and parents who love them — and they don’t take any of it for granted. When asked what she was most excited about, Kyndal said, “Having food on my plate! And not anything with bugs on it.”

The kids also have dreams they can pursue, like being a gymnast or a singer, but their new parents want to make sure they know one thing above all else. “They don’t have to worry,” Terri said. “Of being taken away.” Some people doubted the Hawthorns’ plan to adopt so many children, but they were steadfast, and want to encourage others to consider foster care and adoption as well.

“This is a blessing, they are a blessing. Every day these kids wake up and they are giggling and they are happy, and you see the smiles on their faces, that’s what makes this worth it,” Terri said. “We hope this will give other opportunities and people will consider opening their homes to foster care and adoption. There is such a big need for families in Arkansas, and we will be the first to tell you, it’s not always easy, but it’s worth it. Lots of prayer and love is what made this possible.”

As for the kids, their message is simple. “I love you, Mom and Dad,” Kyndal said with her voice cracking while her other siblings wiped tears away. “And I wouldn’t change it for the world. This has been the best Christmas I could ever have — actually knowing I have a mom and dad.”