Centura Health, which operates hospitals in Colorado and Kansas, is fighting back after one of its doctors tried to force them to allow her to commit assisted suicide. Part of the Catholic Health Initiatives non-profit health system, Centura Health chose to opt-out of Colorado’s assisted suicide law when it was passed in 2016. One of their doctors filed a court order in an effort to force one of the hospitals to allow her to participate in assisted suicide, which led to her firing — and a possible court battle which could have devastating repercussions.

After Neil Mahoney was diagnosed with cancer and learned he had just months to live, he turned to Dr. Barbara Morris, a geriatric physician at St. Anthony Hospital. Originally, she tried to refer him to a different doctor, but that would have meant undergoing more tests, which Mahoney did not want to do. So Morris worked with Mahoney to seek a court order which would allow her to commit the assisted suicide, despite the hospital’s policy against it, and prevent her from being fired. She claimed she is not able to properly care for Mahoney or hundreds of other elderly patients who may want to die. “To be forced to abandon patients has just been intolerable for me,” she told KMGH-TV. Centura responded by firing her — not for filing the lawsuit, but for encouraging an option that is in opposition to their religious principles. 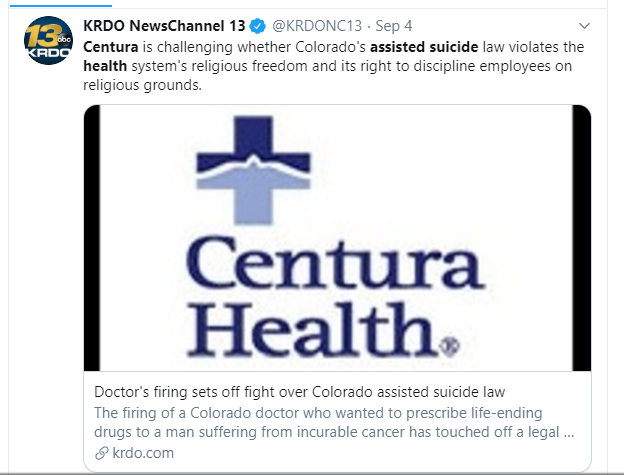 “You have encouraged a morally unacceptable option,” a letter from Centura Health to Morris read. “It is our religious principles upon which the hospital operates and warrants the termination of your employment for cause, effective immediately.” Centura Health CEO Peter Banko likewise affirmed that the issue at hand was Morris’ support for assisted suicide. “Had she never said any of that, we wouldn’t be discussing the termination of her employment,” he said to 9News. “We will never compromise or bend who we are as a health system; that’s not open for debate.”

He added, “It’s a challenge to who we are as an organization, our mission and core values and who we’ve been for 137 years.” This has now launched a legal battle to clarify Colorado’s assisted suicide law, and determine if health systems are able to opt-out, or if that right is only reserved for individual physicians. For Centura Health, it’s an issue of religious freedom.

READ: Former New Zealand abortionist’s revelation: I was exactly like the Nazis

As for Mahoney, interviews with him revealed a devastating outlook on the remainder of his life. “At points it just gets so overwhelming,” he said to KMGH-TV, explaining that eventually, he will have trouble breathing and controlling his bowels. He has no children and does not want to burden his siblings with his care, adding, “Just because they’re blood, doesn’t mean they have to suffer and go through all of this.” This is notable because it lines up with what multiple studies on assisted suicide have found. Overwhelmingly, people are not requesting assisted suicide because they are afraid of experiencing pain and suffering; they do so because they feel depressed, hopeless, have no support, and are worried they will be a burden on their loved ones — and when these issues are addressed, the request for assisted suicide is often withdrawn.

People who are sick or dying don’t need to be pushed towards death. They deserve to know that their lives still have value and dignity, and should be given the support and love they need in their final days.