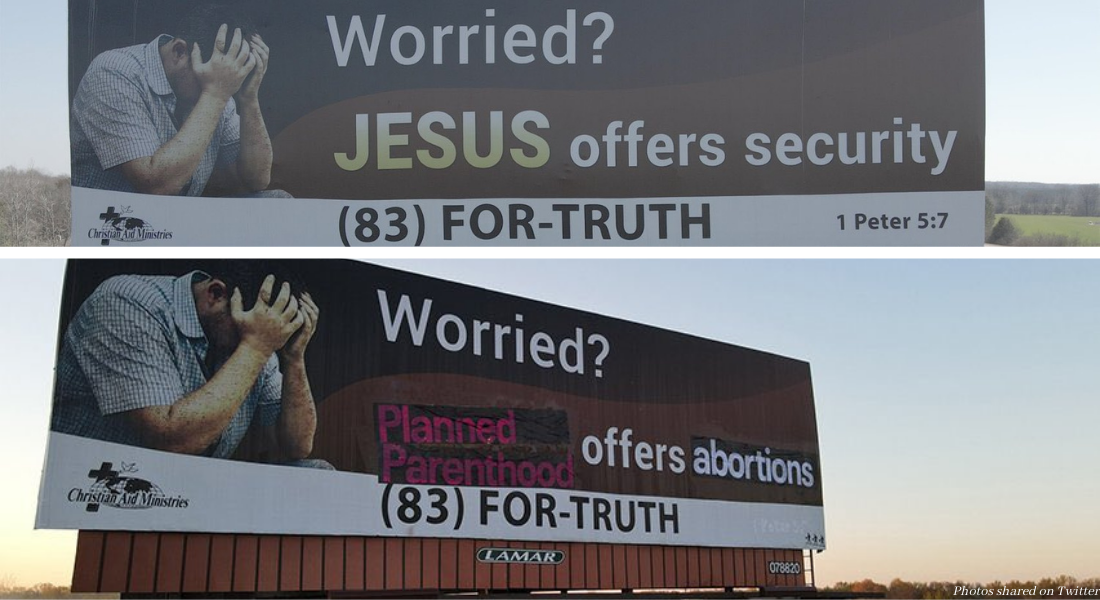 A billboard advertising a non-profit organization which gives aid to those in need was vandalized with pro-abortion graffiti. Christian Aid Ministries erected the billboard in Byhalia, Mississippi, which initially read, “WORRIED? Jesus offers security.” But Indecline, which describes itself as an “activist art collective,” vandalized the billboard to promote Planned Parenthood.

According to WLBT, Indecline took credit for the graffiti. The billboard now reads, “WORRIED? Planned Parenthood offers abortions.” In an e-mail to WLBT, Indecline said the vandalism “is in direct response to lawmakers throughout the South who continue their attempts to overturn Roe v. Wade.”

Yet while Christian Aid Ministries is, indeed, a religious organization, their website does not list preventing abortion anywhere on its list of charitable programs. Instead, the non-profit focuses on programs such as delivering food, water, and supplies to people living in war-torn and impoverished countries like Syria and Yemen, disaster response services, donated medicines from pharmaceutical companies for people in developing nations, help for people who are elderly or handicapped, and much more.

It would seem unlikely that Indecline knows or cares about any of the good work this organization does, and instead, merely wanted to hijack a billboard they presumed to have been erected by a pro-life organization looking to prevent abortions.

Indecline acknowledged to WLBT that they are aware vandalism is illegal, but claim that the act was worth it to push a pro-abortion narrative. “[I]n order to make a change and get people to pay attention, sometimes you have to take risks and we follow in the footsteps of a lot of our idols from civil rights to gay rights activists,” they said. “We like to consider ourselves as creative checks and balances. Sometimes you need to go a little further to end up having a conversation.”

The pro-abortion graffiti also speaks to the inherent misogyny that is associated with the abortion industry. While many abortion advocates claim abortion frees and empowers women, abortion is actually a sign of how society is failing women. Women should be able to give birth and raise children without worrying about also losing their ability to pursue an education, have a career, and live safely. It is true that this often isn’t possible — but what allows this exact injustice to take place is abortion.

Abortion allows the status quo to be maintained; there is no reason to make pro-woman and pro-family accommodations when a mother can simply be encouraged to kill her child instead.