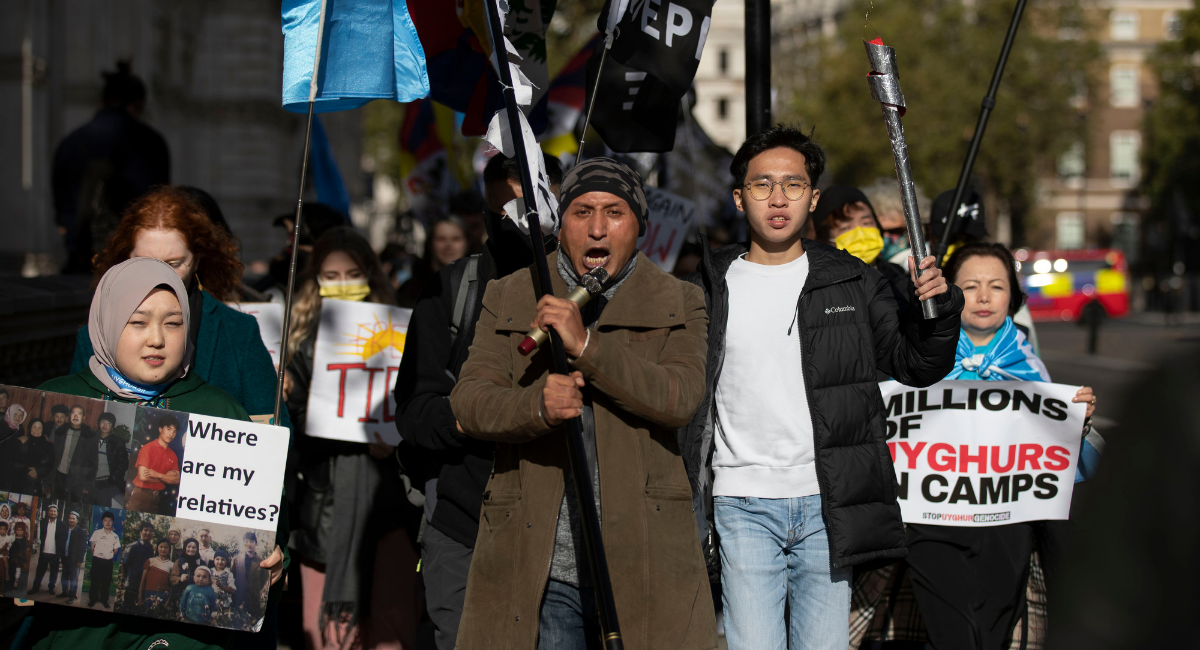 NBA Boston Celtics player Enes Kanter has been one of the loudest voices speaking against the Uighur genocide in China. He worked with Chinese dissident artist Badiucao to create custom shoes with slogans like “End Slave Labor Now” and “Stop Genocide,” which Kanter has been wearing on the court during his Celtics games. This, in turn, has led to China’s alleged blocking of Celtics games from being aired in the country. Kanter has also led rallies in front of the United States Capitol alongside Uighur, Tibetan, and Hong Kong activists, urging lawmakers to take action to end the genocide of the Uighur people.

“We need action. Not just words. We have to make human rights a priority in both U.S. and foreign policies,” Kanter said at a rally. “Only then can we help stop the Uighur genocide.”

Additionally, Kanter has been criticizing Nike, the NBA, and even superstars LeBron James and Michael Jordan, for cozying up to China and turning a blind eye to its atrocities. He has challenged them to visit the concentration camps in Xinjiang with him to see the kind of treatment the Uighur people are suffering.

“To the owner of @Nike, Phil Knight How about I book plane tickets for us and let’s fly to China together,” he tweeted. “We can try to visit these SLAVE labor camps and you can see it with your own eyes. @KingJames @Jumpman23 you guys are welcome to come too.”

Though Kanter has been trying to make a difference, many of the world’s superpowers have been unwilling to do anything to put an end to the Uighur genocide, or to even speak against the human rights abuses other Chinese minority groups are suffering.

A recent conference in Brussels discussed forced organ harvesting, to which members of the Falun Gong religion have been subjected in China. KaYan Wong, spokesperson for Falun Gong in Holland, put the blame squarely on the shoulders of the Chinese Communist Party (CCP).

“Falun Gong has been and is, for many, more popular than communism in China and the current regime is jealous of this,” he said. “The crackdown and persecution of the Falun Gong started as far back as 1979 and since then it has been illegal to practice Falum Gong in China. The aim is to demonize Falun Gong and treat it as a cult. People in China are told that it is very dangerous. After the Holocaust the world said ‘never again’ but it is still happening in Communist China. Everyone knows that the CCP is evil so this event today is important and can make a real difference.”

Reports claim that these organs are then sold on the black market, with an alleged profit of $1 billion each year for Beijing. In addition to Falun Gong practitioners, other groups reportedly subjected to forced organ harvesting are Uighurs, Christians, Muslims, and Tibetans.

Hamid Sabi, counsel for the international China Tribunal, added that they have thousands of pages of reports proving this is taking place. “The findings of the Tribunal are amazing and it concluded that the practice of forced organ harvest has been going on for many years in China. Thousands of transplants take place every year. All these have been documented,” he said. “China itself says it has got 2.8 organs for every deceased registered donor. The Tribunal said this has been going on for 20 years in China and that Falun Gong members in particular are used for this practice. But China has apologists for what it does who do not come out and condemn China. This has allowed China to escape public condemnation.”

Many Uighurs have tried to escape China, fleeing to other countries for what they hope will be safety. But China has a far reach, as some have unfortunately found out first hand. In the United Kingdom, for example, Uighurs are being targeted and harassed by Chinese authorities, according to Policing Minister Kit Malthouse. He claimed that Uighurs are being harassed in “an effort to intimidate them into silence, force them to return to China, or co-opt them into providing information on other Uyghurs.”

Meanwhile, Muslim countries have been deporting Uighurs back to China, a horrifying notion for those who likely thought they had escaped to safety. One woman fled to the United Arab Emirates (UAE) with her family, one for UAE officials to hand her husband over to China with no warning or explanation.

“If my husband [has committed] any crime, why they don’t tell me? Why China don’t tell me?” she asked CNN. “I don’t know if my husband is still alive or not,” she said. “I have no … news about him from China, from UAE. Both [are] silent. They are silent, completely silence. Why you don’t obey your own court paper? You say you are Muslim country. And I never believed that since this happened, I never believe you.”

For Uighurs who have escaped to countries that won’t deport them, China has responded by imprisoning their families left behind as a means of intimidating the people who escaped. “As retaliation against me because I made that public speech, as a tool to silence me, they abducted my sister,” Rushan Abbas, a Uighur American activist, told the New York Times. “They have my sister as a hostage right now.” Her sister, Gulshan Abbas, has been sentenced to 20 years in prison.

Another genocide being ignored

When the Nazis began conducting a genocide against the Jewish people, much of the world remained silent. Now, the United States Holocaust Museum has published a report warning that the same thing may be happening again, and that the world needs to take action. The report, titled “To Make Us Slowly Disappear,” was published by the Simon-Skjodt Center for the Prevention of Genocide, which vows that it “seeks to do for victims of genocide today what was not done for the Jews of Europe.”

The report noted that the Uighurs are not merely being forced to assimilate into Chinese culture, as the CCP often claims, but this has all the hallmarks of a true genocide. “This includes, in particular, a deepening assault on Uyghur female reproductive capacity through forced sterilization and forced intrauterine device (IUD) placement as well as the separation of the sexes through mass detention and forcible transfer,” the report noted, adding that the sterilization policies raise “legitimate questions about the existence of the intent to biologically destroy the group, in whole or in substantial part.”

An additional whistleblower report from CNN featured statements from a Chinese ex-detective, who said Uighurs as young as 14 are tortured mercilessly until they confess. Methods include hangings, sexual violence, electrocutions, waterboarding, and beatings. And for Uighurs who have survived, there is one goal for the CCP: to make them extinct.

Gulzara Muhammed is a Uighur now living in Turkey, though both her husband and elderly father were arrested and imprisoned in Xinjiang. “My family were under surveillance by Chinese authorities just because my husband was an Imam and my father who lives with us had begun teaching the Quran to Uyghur children. We would get constant disturbances by Chinese police asking about our activities which intensified over a period of months, even though we were simply following our faith,” she said. Muhammed was urged to leave by her brother, but the CCP would not allow her to leave unless she got a “medical check” first — which turned out to be a ploy to sterilize her.

At the hospital, she was told she had a cyst that needed to be removed. I remember being given an injection and I became unconscious. When I woke up I was in pain and was told that the procedure is done but now I will not be able to have any more children,” she said. “They lied to me. They tricked me. They have sterilised me without my consent and one day I hope they (the Chinese government) will own up to their misdeeds as it is them who orders hospitals to do this. They are trying to stop the Uyghur population from growing and this is the only way they can do it – by targeting us, Uyghur women.”