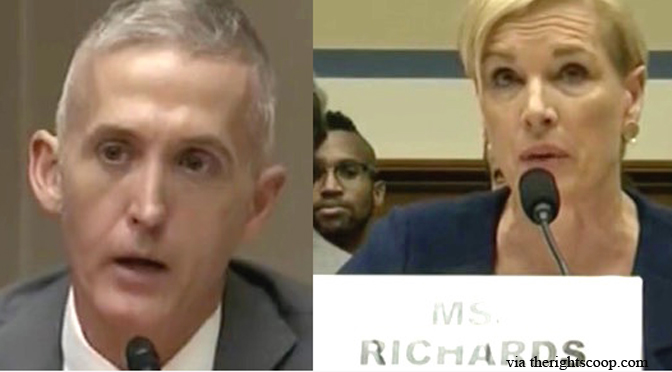 Planned Parenthood CEO and president Cecile Richards testified before the House Oversight Committee on Tuesday and seemed to have difficulty conceding that Planned Parenthood, the nation’s largest abortion provider, has political ties. And yet they still receive taxpayer dollars.

It seems unfair that such a politically charged and morally objectionable group would receive such funds. This is even more objectionable, considering what Richards thinks of her opponents. She made her thoughts quite clear during her exchange with Representative Trey Gowdy (R-SC).

Gowdy noted that he disagrees with his Democratic colleague, Rep. Peter Welch (D-VT), on the abortion issue, but that both still try to be understanding of each other’s perspectives.

Do you understand how some of us, at a base level, disagree with you on the origin of life? Do you make that same effort to understand that my friend from Vermont, Peter Welch, makes?

While Richards tried to answer the question (sort of), she wasn’t exactly throwing any olive branches to the pro-lifers who are forced to fund her organization.

Gowdy then specifially asked her about partial-birth abortion. Her response was not encouraging:

Well I-I-I don’t want to–I’m not trying to be argumentative, but that was a political formulation, not a medical formulation, but I certainly understand that it was passed and is the law of the land, and Planned Parenthood certainly um, meets–meets the requirements of that law.

Fortunately, Gowdy did not find such a response to be appropriate. As he reminded Richards:

Richards did end up getting argumentative, as she continued by saying:

I understand how people can disagree based on their religious beliefs, their backgrounds, their own personal experiences, and I also understand that people sometimes change over time. And that’s, a human condition.

Are you suggesting that those who hold a contrary view to you need to change? Is that why you added that line, Ms. Richards?

Richards continued to lose her cool even more:

No, I’m just, candidly, in my 10 years at Planned Parenthood I’ve seen, I’ve experienced myself, people who have picketed outside of our health center and found themselves in need of our services and we try not to judge…

And I’m sure that there have been employees who grew tired of participating in the practices they were participating in, and they may have gone to the other side. Might they?

Richards was at a loss to find a name, and Gowdy did not give her a chance to come up with one. There certainly were names available, though – most notably Abby Johnson, who used to be a Planned Parenthood clinic director. (This security guard is a less-known example.)

Gowdy went on to ask about those who supported legislation to ban abortion based on sex or race. Planned Parenthood has indeed come out against such legislation – well, pretty much any pro-life legislation.

At one point, cross-talk ensued as Gowdy tried to get her to answer his basic question.

Richards: As I’ve tried to say, I appreciate that people have a lot of different views on the issue of abortion and there’s any number of different pieces of legislation you could describe, and I think fundamentally at Planned Parenthood we take the position that we trust women to make their decisions about their pregnancies. I’ve made my own decisions as well and so I feel like I walk… I can walk in these shoes.

Gowdy: Ms. Richards, I appreciate the way you like to frame the issue, that you’re the reasonable one and those of us who have a contrary position are not reasonable…

Richards: I didn’t say that.

Gowdy: No that’s exactly, that’s exactly the last answer you gave. That’s exactly what it was, much like what your ‘people evolve to a more, to a more advanced, um, viewpoint.’ Much like that comment, was also directed to that…

Richards: Those were not the words I said. I said sometimes people change…

Gowdy: No, it’s not always what you say, sometimes it’s what you mean.

Gowdy hit it right on the money , that “sometimes it’s what you mean.” And Richards has certainly made it clear what she means. She doesn’t understand or respect the views of those who agree with her, even when a pro-abortion Congressman can. And she’s all the more happy to take the dissenters’ dollars by force.