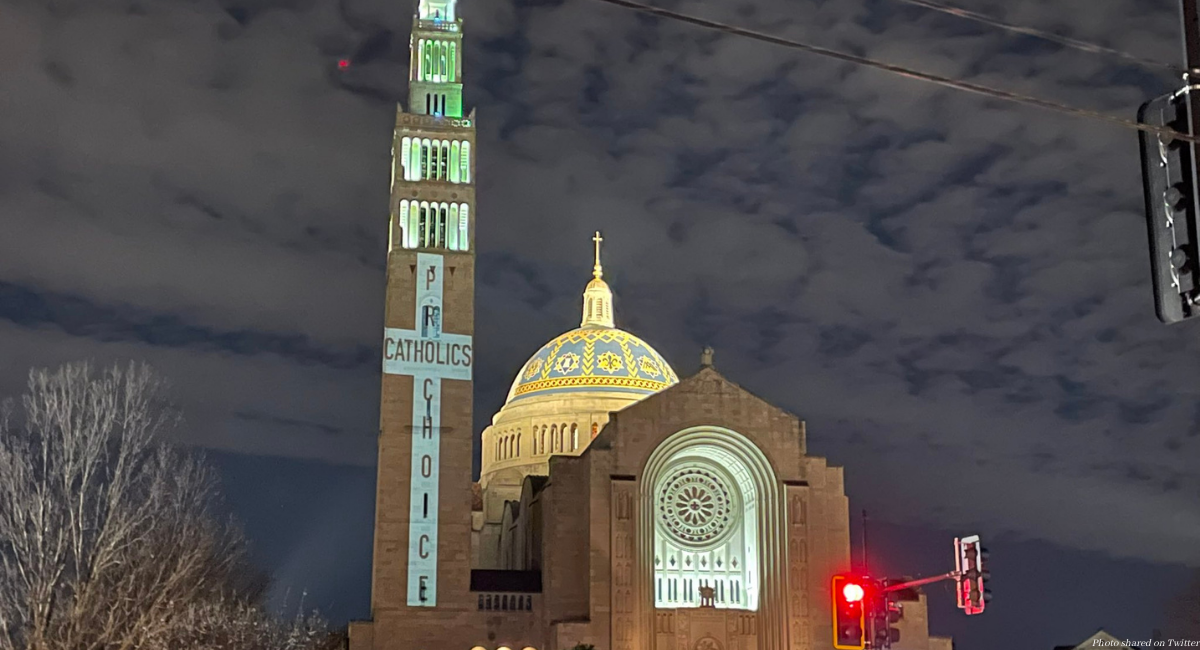 In advance of the March for Life and during a pro-life prayer vigil, Catholics for Choice projected a series of pro-abortion messages onto the Basilica of the National Shrine of the Immaculate Conception in Washington, D.C.

In a Facebook post, Catholics for Choice, which also once sent Planned Parenthood love letters for Valentine’s Day, boasted about its activism, specifically noting they chose to act in advance of the March for Life. “We’re here to remind everyone that the people at this march are in the minority,” they wrote. “Catholics for Choice is proud to say that 68% of Catholics support Roe v. Wade.”

Jack Jenkins, national reporter for the independent non-profit Religious News Service (RNS), tweeted about the display. In a further write-up about the protest, he noted the group obtained a permit beforehand. Jamie Manson, president of Catholics for Choice, led a pro-abortion prayer beforehand.

“God of compassion, be present to all who have had abortions, may they feel your love,” she said. “Be with all abortion providers, may they be safe. Sustain them with your comfort, and your courage.”

READ: Catholics for Choice urges Joe Biden to expand abortion… for the sake of ‘human dignity’

The projector then cycled through a number of messages lit up on the Basilica, including, “Pro-choice Catholics you are not alone,” “Stop stigmatizing; Start listening,” “Mi cuerpo, mi decision,” “Pro-choice Catholics” on a Christian cross, and “1 in 4 abortion patients is Catholic.”

Ashley Wilson, director of communications and strategy for Catholics for Choice, tweeted a string of messages about why the group chose such a disrespectful method of protest, for supposedly faithful Catholics.

“I know that my faith teaches Catholics to honor personal conscience. And yet, the Catholic hierarchy seeks to polarize pro-choice Catholics and villainize people who make the moral choice to have abortions,” she wrote. “I am tired of feeling shame and stigma for being a pro-choice Catholic. And I’m not here for people to judge my own personal relationship with God.”

It is true that the Catholic Church teaches that some political and moral issues are subject to an individual’s own prudential judgment or interpretation — but abortion is not one of them. It deliberately ends the life of an entirely innocent human being. It has repeatedly been placed in the category of an “intrinsic evil,” meaning it can never be justified. The Catechism of the Catholic Church likewise states that, “from the first moment of his existence, a human being must be recognized as having the rights of a person — among which is the inviolable right of every innocent being to life.”

Basilica representatives provided a statement from Cardinal Wilton Gregory to RNS, condemning the display. “The true voice of the Church was only to be found within The Basilica of the National Shrine of the Immaculate Conception last evening,” the statement read. “There, people prayed and offered the Eucharist asking God to restore a true reverence for all human life. Those whose antics projected words on the outside of the church building demonstrated by those pranks that they really are external to the Church and they did so at night – John 13:30.”

San Francisco Archbishop Salvatore J. Cordileone also spoke out on Twitter, saying, “The attempted desecration is enormous. Diabolical. Mother Mary, pray for them, now and at the hour of death. Amen.”