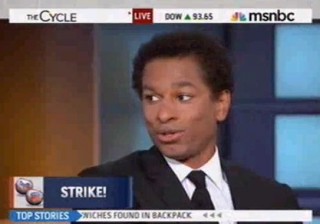 Too honest for their own good.

The idea of abortion as a source of dignity for women has always been a sick joke, and though he didn’t mean to, an MSNBC personality helpfully demonstrated why on Friday. Touré Neblett gave the following ode to abortion:

This week brought us the fortieth anniversary of Roe v. Wade and made me reflect on a moment from about fifteen years ago, when I was in a committed relationship with a woman who I knew was just not the one. She also knew it probably wasn’t gonna work out…and then she got pregnant.

Gee, it sure is a shame that the cause of pregnancy wasn’t common knowledge back in the nineties. What’s that, you say? It was? Oh. In that case, one would hope that at least a couple pro-choicers could take off the ideological blinders long enough to consider that just maybe Neblett’s ordeal demonstrates that pro-lifers aren’t completely off our rocker when we suggest it’s a bad idea to introduce sex into a relationship before knowing whether it’s “gonna work out.”

And I was terrified. I’ve always known the importance of family and building kids into strong adults, and I know I would not be who I am if not for growing up under the watchful eye of two people who loved me and loved each other. I knew that pregnant woman and I were not gonna be able to form a lasting family. She decided it was best to have an abortion, and days later she did, and in some ways that choice saved my life. I was not then smart enough or man enough to build a family or raise a child, and I only would have contributed to making a mess of three lives.

This entire narrative hinges on the lie that there wasn’t already a child present, and therefore the abortion merely prevented harm to a possibility. But the truth turns Neblett’s “heroism” completely on its head. He was a father, and he had a son or a daughter who needed and deserved his love, care, and protection. But he decided that his plans for the future mattered more. Instead of facing his responsibility and embracing fatherhood, or at least offering to help support his girlfriend enough to deliver the baby and give him or her the hope of adoption, Neblett hid behind her decision to kill and the comforting “out of sight, out of mind” fantasy its legality enables.

You’re right about one thing, Touré: you weren’t man enough. And you still aren’t.

Years after that I met another woman, married her, and after we decided to get pregnant, I went to her doctors’ appointments, our doctors’ appointments, with joy. It was a thrill to watch that boy grow inside her, but I must admit during that second trimester as we watched him move around on 3D sonograms, I saw how human they are at that stage and my lifelong belief in abortion rights was, let’s say, jostled. It was life colliding with belief system. I had to rethink my position.

But that rethinking apparently meant nothing, considering that the rest of the monologue is a by-the-numbers apologia, complete with the usual clichés: “unsolvable medical debate about when exactly life begins,” (no there isn’t), “a woman’s right to control her body” (more biological illiteracy), and a gratuitous “misogynistic” thrown in for good measure.

The least generic argument Neblett brings to the table is the preposterous claim that abortion somehow promotes stable families, his only supporting evidence for which is the statement that “the higher a state’s abortion rate, the lower its divorce rate.” But according to FactCheck.org:

[T]he number of divorced persons has risen from 3 percent of the adult population before Roe to 10 percent most recently. The divorce rate (per 1,000 population) rose for several years after Roe and didn’t dip back below pre-Roe levels until 1999, according to Census Bureau figures.

What’s more, in analyzing the study Neblett cites, Michael New suggests a cause other than abortion for the state-by-state data: “this is likely because southerners tend to marry at a younger age and have higher rates of divorce.”

Rather than negating the objectification of women, abortion gives cads another excuse to ditch the women they use for sex. Worse, the celebratory cult surrounding it lets the cads pretend there’s something to be proud of in sustaining their sleazy lifestyles with murder. But, just like Mary Elizabeth Williams, Neblett may find he’s been too honest for his own good.