Pro-aborts have been falling all over themselves to convince everyone that the new “bro-choice” movement isn’t as disgusting as its proponents make it out to be. Despite the ample number of bro-choicers happily celebrating how abortion enables them to have casual sex with women without commitment or consequences, pro-aborts still insist that they’re really just joking.

Unfortunately, those pesky bro-choice men aren’t cooperating. Case in point: J.J. Redick, NBA player and unofficial bro-choicer. While he describes himself as a Christian and a husband, evidence has come to light this week showing that Redick probably feels right at home in the bro-choice movement. Media Takeout uncovered a contract this week, where Redick and his former girlfriend Vanessa Lopez agreed how to handle an apparently unwanted pregnancy: by having an abortion, of course. The couple had already broken up, but if Lopez would kill her child, Redick would “try” to maintain a relationship with her for one year. If he broke up with her before the year was over, then he would owe her $25,000. That’s right. Redick and Lopez actually sat down with their lawyers and drew up an abortion contract, which you can see here.

Remember that Redick is a professional basketball player for the NBA. Any child he has would have grown up in a life of wealth and privilege. It wasn’t as if money was an issue for him. What was a problem was the fact that Redick could no longer have sex without consequences. But no worries – abortion to the rescue!

This disturbing story takes a darker turn, though. Jill Stanek has had information about Redick and Lopez for a little while, but she chose not to come forward with it until she had Lopez’s blessing. Stanek’s information shows that Redick coerced Lopez into having the abortion. (Bro-choice!)

Lopez’s abortion was performed at All Women Health Center in Orlando, FL., by Dr. Harry Perper. Prior to her abortion, Lopez filled out the following form. 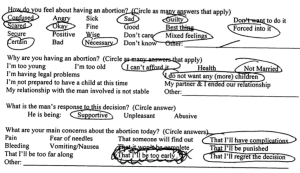 Despite Lopez saying that she felt “forced into it,” Dr. Perper proceeded with the abortion. Lopez was approximately 16-17 weeks pregnant.

Stanek also has e-mails from Redick, his attorney, and his wealth manager. No one had any concern for Lopez, her health, or the ordeal she had just been through. They were concerned only with whether or not the child was aborted, as evidenced by this e-mail from attorney Greg McNeill:

Stanek explains what happened next:

It was at this point things soured. Vanessa never tried to collect the $25,000, and she never heard from Redick again.

Why did Lopez get the abortion? My source: “She got the abortion to save the relationship. She was fairly young, fairly immature, and clearly in love. I do believe she was manipulated by Redick. She told me she wanted to have this baby but he was adamant in his opposition. She thought if she did what he wanted her to do, he would continue the relationship with her. What self-respecting person would sign such a document? My sense is she was simply operating in an emotional state that precluded her from acting rationally. She had no attorney. She hoped somehow, some way that doing what he wanted her to do would benefit her in the long run.”

Sadly, that did not come to pass. Vanessa began to experience symptoms of post-abortion stress syndrome. She sought professional help.

Her doctor said that Lopez’s Post Traumatic Stress Disorder resulted from physical violence and a forced abortion by her ex-boyfriend: Redick. Furthermore, he testified that even after the abortion and the end of the relationship, she was still subjected to threats from Redick’s family.

If everything here is true, then it makes an already disgusting story even worse. But how much of it can we really be surprised by? A movement which fights for women to be able to abort their children so that men can continue to enjoy consequence-free sex is a movement that encourages the exploitation and abuse of women. J.J. Redick could be called the poster boy for what it means to be bro-choice. These are men who want to use women, exploit them, and then throw them to the curb like trash as soon as they’re done with them. And yet, they are also the men applauded by abortion advocates calling themselves “pro-woman.”