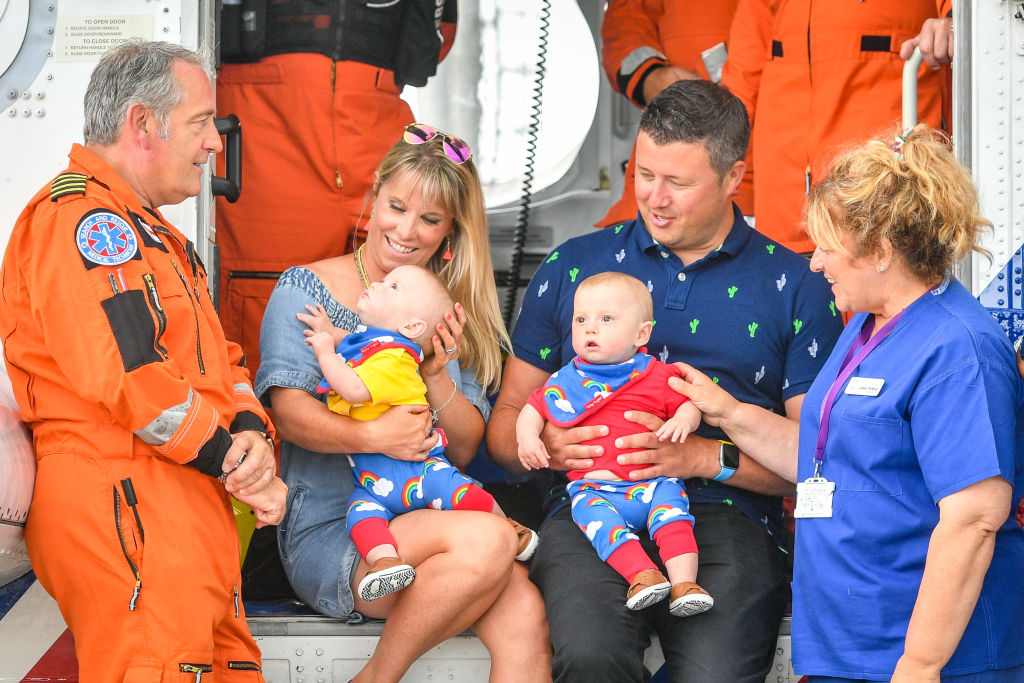 Twin boys born at 22 weeks celebrated their first birthday this month, and are now thriving and healthy. Ruben and Jenson Powell are the youngest surviving twin boys in Britain, born a week before the country’s abortion limit, and have pulled through even though doctors originally said they had no chance at surviving. “It really is a story of hope and miracles,” their mother, Jennie Powell, told the BBC. “They defied every set of odds that they were given.”

Originally from Brighton, Jennie and Rich Powell were on vacation in Cornwall when she went into premature labor with the boys. After checking in to the Royal Cornwall Hospital, doctors realized how dire the situation was, and flew the parents to the John Radcliffe Hospital in Oxford on a Coast Guard helicopter. The next day, Ruben and Jenson were born, though Jennie was just 22 weeks and six days pregnant.

The boys were incredibly tiny. Ruben came in at just 20.8 oz, and Jenson at 18.8 oz, neither much larger than a can of soda. Doctors told the Powells that Jenson had no chance of survival, while Ruben had a mere 20 to 30 percent chance. This devastating turn of events came just two years after the Powells had lost a previous baby, also born premature at 23 weeks, from complications after an infection. “The twins’ pregnancy was being closely watched as a result of what we had been through when we lost our first child,” Jennie explained. The boys received eye injections to cure retinopathy of prematurity, which can cause blindness, and had to battle numerous complications.

“The boys had it all – infections, more than 20 blood transfusions, sepsis, pneumonia, eye injections and laser surgery, hernia reversal, you name it,” Rich said. “Today, the boys are thriving.”

Ruben had to undergo an operation to repair his intestines when they began to fail, and Jenson struggled with weakness in his lungs. But the boys made it, thanks to their doctors. “The standard of care we received was outstanding,” Jennie said. And though they survived, they will still need to be closely monitored for the next few years.

“They will continue to have chronic lung disease until they are about three, which can make them more vulnerable to colds and infections, requiring oxygen support,” Rich said. “[B]ut otherwise they are doing really well.”

Now a year old, the boys have finally been able to reunite with the helicopter crew that the Powells say saved their sons’ lives, exactly a year later. “The hospital team didn’t give up calling, and when the John Radcliffe Hospital said they could take us that afternoon we found ourselves being airlifted by the HM Coastguard helicopter from Newquay,” Jennie said to Sky News. “That was a lifesaving decision.” A midwife, Jane Parke, flew with them to the hospital, along with Captain Jorg Brunner, co-pilot Ivan Hamilton, chief crewman Ian Copley and winchman-paramedic Niall Hanson. “After that day, Jane and the helicopter crew didn’t have any idea about what had happened to us – that the boys had survived,” Jennie continued. “Being able to meet them again on the anniversary is so, so wonderful.”

In the United Kingdom, abortion is permitted for any reason until 24 weeks. After 24 weeks, it’s banned — unless the baby has a disability of any kind, even one as minor and easily correctable as a cleft lip. But as Ruben and Jenson prove, these babies being targeted for abortion are alive. They are human beings who can feel pain. Babies like Ruben and Jenson deserve the chance to live, regardless of whether that life is in the womb, or outside of it.