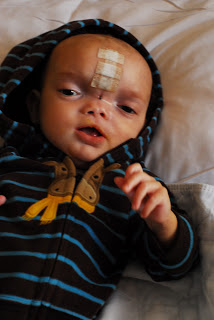 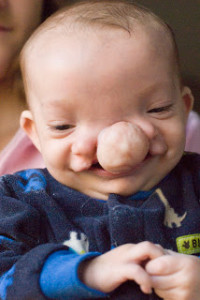 On June 18, 2012 a baby boy named Dominic Pio was born into the world who, had he be given different parents, may never have been born at all. Mid-way through her pregnancy, Mary Gundrum would learn that her son had an encephalocele, an extremely rare birth defect that occurs when part of the skull doesn’t close properly, allowing the brain to grow through that opening in the skull. Told that her baby boy might not survive the pregnancy or his birth Mary, along with her husband Mark, didn’t contemplate abortion. The Catholic mom told The Boston Globe:

“We did a lot of soul-searching. I was thinking, ‘That’s my child. It’s that simple. I’m not going to take the life of my child.’

Mary and Mark turned to the power of the internet and although their search turned up little hope for children with an encephalocele, they didn’t lose sight of the hope they already had. And then they found Dr. John Meara, plastic surgeon in chief at Boston Children’s Hospital. He had removed an encephalocele in 2008 and videotaped the procedure which was then posted online. The couple could hardly believe it. They sent Meara the ultrasound of Dominic and he called them the next day, telling them it was going to be okay. This alone makes him the greatest doctor.

However what Meara saw on the ultrasound was not one but two conditions. Dominic indeed had an encephalocele. Each year about 375 babies are born with encephalocele with varying effects such as vision problems, seizures and developmental delays. However, Dominic also had a Tessier facial cleft, meaning the two halves of his face and head did not come together during development. This would pose additional challenges. What is most shocking however, is that Meara says he’d be surprised if another child with both of these conditions was born every 5 to 10 years, not because of how “exquisitely rare” it would be, but because of the state of abortion in America. Because of prenatal testing, according to Meara, most babies with Dominic’s diagnosis are aborted.

But not Dominic. He was born with a close to perfect Apgar score, and after his birth, he was welcomed into a home that included seven big brothers and sisters all ready to love him, and parents who would never give up on him. His optic nerves were not fully developed and he was missing his corpus callosum, the part of the brain that allows for the transfer of information between the two hemispheres. And in addition to surgery, he would need occupational therapy. 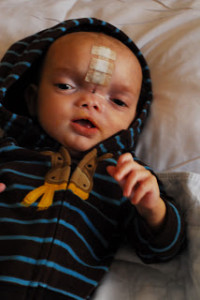 Over the next few months the family remained in close contact with Meara, and when Dominic was just about six months old, the family traveled to Boston for his surgery. A local Catholic family there donated their home to the family of 10 so that they could all be together through the holidays while Dominic recovered from surgery. Strangers from across Boston brought the family meals to eat, as well as Christmas gifts for the children. The Gundrums experienced blessing after blessing.

Dominic’s surgery was successful, however he struggled for a bit afterward with a fever and high sodium levels. During this time, he coded twice. But his family and his doctors never gave up hope. Once he was stable again, Dominic underwent a second surgery to open his nasal passageways. Afterwards, Dominic was ready to heal and so was his family.

Dominic celebrated his first birthday this summer and he is as full of life and giggles as any other one-year-old. More surgeries are likely, but doctors have great hope for his future. And so do his parents. 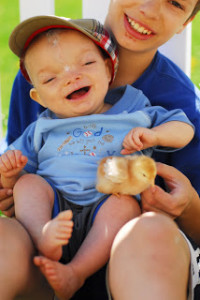