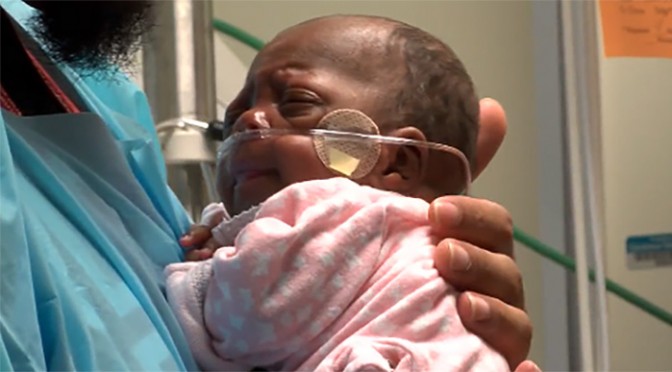 Baby E’Layah Pegues, one of the smallest and youngest babies to have ever survived premature birth, is going home. She was born via emergency C-section on September 23, 2015 at just 24 weeks gestation. E’Layah’s mother Megan Smith began to experience severely high blood pressure during her pregnancy, and both her life and the life of her daughter were at risk. Doctors, who said they could fit E’Layah in their palms when she was born, were not sure she would survive, and they prepared E’Layah’s parents for the worst. However, her mother never gave up hope, and E’Layah proved to be a fighter.

Smith told ABC News that they gave E’Layah the middle name of Faith because she and her fiancé would always have faith and would never give up on their daughter. Before heading into the C-section, Smith prayed.

“Inside I was screaming, ‘The devil is a liar,’ you know, ‘You will never have my child,’” she said. After nearly five months in the hospital, E’Layah now weighs five pounds and seven ounces, and while she still has some challenges ahead, she is doing really well.

“She has grown, and she has been able to breathe on her own and she looks around. She pays attention to her surroundings, she knows her mom’s voice, she knows her dad’s voice… and I’m amazed she has come this far,” Dr. Jessica Clark-Pounder of Levine Children’s Hospital told CBS News.

After overcoming some complications in January, E’Layah is finally strong enough to go home with her parents. Doctors expect that she will have a normal, healthy life.

Advances in ventilator care and IV nutrition are being credited with saving the lives of an increasing number of premature babies. Abortion advocates consistently argue that late-term abortion is necessary in order to save the lives of pregnant women facing health issues. However, babies like E’Layah prove that doctors can work to save both lives: mother and child.