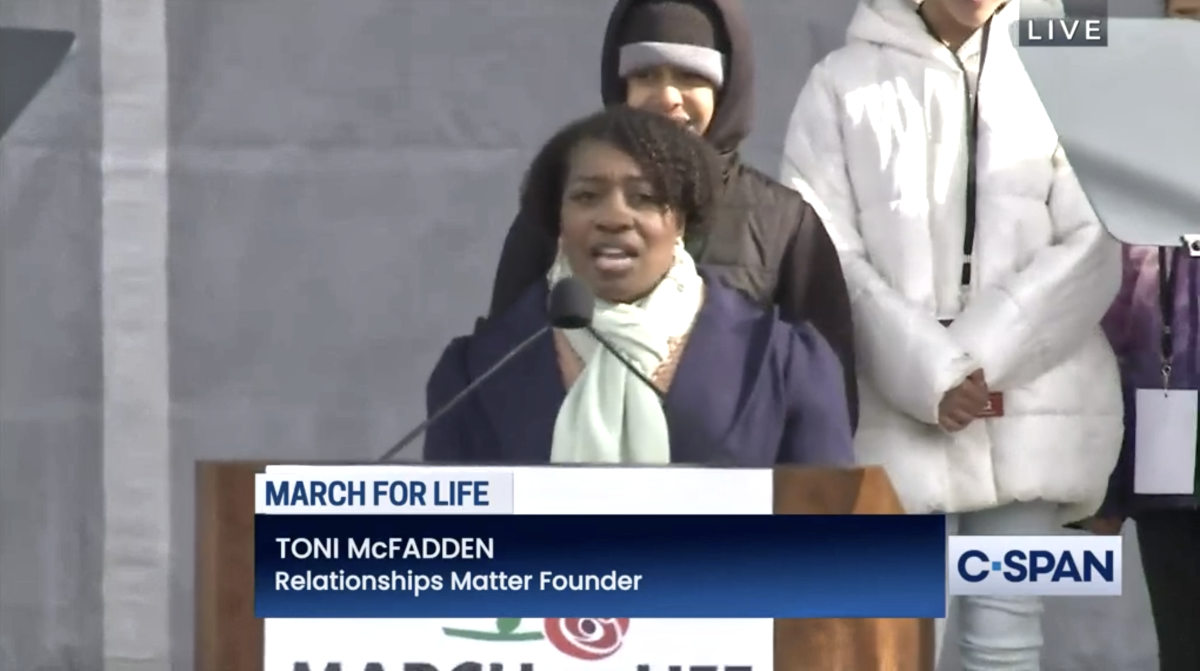 Toni McFadden, founder of Relationships Matter, spoke at the 2022 March for Life on Friday, January 21. In just a few moments, McFadden shared about how falsely believing that some lives are worth more than others led her to end her child’s life in an abortion. McFadden’s powerful testimony also reinforced the idea that God can redeem anything — including abortion.

“There was a time in my life that I believed my life was more valuable than my unborn baby’s. My senior year in high school, I selfishly ended the life of my child,” she told the crowd at the March for Life Rally. “I believed the lie that if I aborted my child my boyfriend would stay with me, my parents would never find out about my secret, and my life would go along as planned, and the abortion facility led me to believe the same.”

McFadden said that at seven weeks pregnant, the abortion facility told her that her baby “was nothing, just the size of a pea.” She was also apparently not told about the risks of the abortion pill, which did not work and which she said caused her “to experience severe hemorrhaging unexpectedly while I was in school. This was a month after taking those pills. This is the reality of abortion, It only destroys.”

The abortion pill’s failure rate increases as pregnancy progresses, and it comes with significant risks — hemorrhaging its just one of them. And now that the FDA has approved a “no-test” protocol with abortion pills through the mail, women have even less medical supervision, which puts them at even greater risk:

McFadden’s abortion solved nothing. “My boyfriend walked out of my life without warning. My life began to unravel at the seams. This is what the abortion industry calls freedom?” she said, adding, “The greatest regret of my life was ending the life of my child.”

I believe all lives matter, and those who advocate for Black lives to matter and demand equal rights for Black men and women — that needs to start in the womb. Because we know the very act of abortion is wiping us out.

Overall, McFadden’s testimony is one of hope despite the destruction and grief of abortion. “I am so thankful that we have a God who redeems, and who can take the pain and the mistakes of our past and make something absolutely beautiful out of it,” she said, noting that after nine years, her boyfriend came back to her and they eventually married and went on to have four more children.

“This is a picture of redemption,” she said. “We are on the right side of history in this battle. I needed all of you then, and these babies still need you now, and we will not stop until abortion is made illegal and unthinkable.”