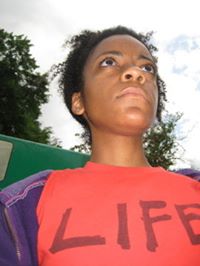 Note: This is part two of a series. You can read part 1 here: Black America: Abortion destroys our dignity.

African-Americans are a people with a collective identity. We march in the streets for a slain teenager because his pain is ours. We rally around the television to watch a young Olympian leap because her gold is our victory. We rejoice with those who rejoice and weep with those who weep.

However, when it comes to abortion, we’ve failed to identify with our unborn brothers and sisters. Where are the tears for the 16 million black unborn who never entered into daylight? Where are the cries for their justice? We, a people who raised our fists through history, refusing to let our nation forget us, have seemingly forgotten our own children.

The Hebrew Scriptures tell the story of a man named Cain who, motivated by envy, murdered his brother, Abel. The God of Abraham, Isaac, and Jacob bellowed from heaven, “Where is your brother?” To this Cain replied, “Am I my brother’s keeper?” Yahweh, to whom nothing is hidden, responded with these words: “Your brother’s blood cries out to me from the ground” (Genesis 4:10).

Bloodshed at the hand of a family member is a horrible betrayal. From the whips dealt by the plantation owner’s lash to the beats borne on “Bloody Sunday,” blacks have shed their blood at the hands of strangers. Yet when it comes to abortion, we, like Abel, are victims of bloodshed through the acts of our family members.

I am the child they stole from the sand
Three hundred years ago in Africa’s land.
I am the dark girl who crossed the wide sea
Carrying in my body the seed of the free.
No safety, no love, no respect was I due.
Three hundred years in the deepest South:
But God put a song and a prayer in my mouth.
God put a dream like steel in my soul.
Now, through my children, I’m reaching the goal.
Now, through my children, young and free,
I realize the blessings denied to me.

A mother is called to protect the seed she carries within. A father is destined to fight for his children. Parents have the privilege to nurture the young and defend the weak. The black community neglect this privilege when we terminate our children.

We’ve swallowed and digested the propaganda of “my body, my choice.” Being poor students of history, we remain ignorant of the racist agenda found in the writings of Planned Parenthood founder Margaret Sanger. Desiring progress, we run forward, unaware that millions are missing from the lanes. Untold millions who never got the chance to start their race.

It’s easier to point the finger at our former and present captors than to hold ourselves accountable. Pastors, who demand justice for our people, should sit in silence and ask themselves if they’ve been their unborn brothers’ keepers. Political leaders should fight to protect the unborn, our most valuable assets. We, a people thought to be against abortion, must stop supporting leaders who act as puppets for the billion-dollar abortion industry, Planned Parenthood.

Black believers have a duty to put their faith into action on behalf of the most vulnerable among us. It’s comfortable to shout and praise in congregations with climate control and cushy pews. It’s challenging to leave those places and stand on corners outside abortion clinics. We must accept this challenge.

Are we willing to see women rushed in like cattle, with the light gone from their eyes? Will we behold the steady stream of black men who escort their ladies into clinics to eliminate their problems? Will we open our ears to hear the silent cries of millions of unborn children who are sentenced and executed for crimes they never committed? If we want to fight for our people, this is the face of injustice in black America.

Black America has surrendered its dignity with the death of our offspring through the insidious act of abortion. Until this evil is overturned, we stand condemned by the weight of our history. We, a people who championed self-respect, neglect to give it to ourselves and our children. Are their answers for this atrocity? Yes, we have them.

Every person, regardless of his or her occupation, can play a role in righting this wrong. Before we can act, we must be awakened by the alarm. We must commit to the cause of life. Refuse to make peace with the act of abortion, for it goes against all we’ve stood for as a people.