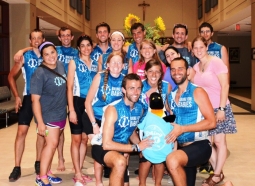 Despite numerous “potholes” in their 1,000 mile bike ride from New Orleans to Chicago, Biking for Babies met their goal of raising $50,000 for pregnancy resource centers. They endured a boot on the wheel of their team van twenty-five minutes before their departure from New Orleans, two riders out for a day due to heat sickness, 30 flat bike tires (a new record), a crash in the traffic of Memphis, and being pulled over twice by cops. Through the summer heat they were kept strong by the support they received from the communities they rode through.

“I think there was more on road support than I’ve ever seen,” explains Mike Schaefer, co-founder of Biking for Babies, “[There were] happy honks, thumbs ups, people donating money at gas stations. Community support, I think, has been stronger than ever. Churches were generous in, not just feeding us, but also several times waiting a couple of hours before we were supposed to arrive in order to cheer our arrival. Many people provided comfortable beds to sleep on.”

Biking for Babies began riding in 2009, and Schaefer says he’s never been more satisfied with the conclusion of a ride. They were able to get all eleven riders and five support crew members successfully through the entire route on time and in one piece. They even set a new speed record of 52 miles per hour. The trip created a strong sense of community and friendship among the riders as well as numerous memorable moments. 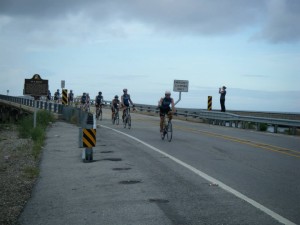 “My favorite memory that I will cherish forever occurred on our day off,” says Jimmy Becker, co-founder of Biking for Babies, “During this time, we had the opportunity to share reflections on three questions we had considered earlier in the trip, namely:  “What are you doing?  Why are you doing it?  Who are you doing it for?  We have a video on the website the captures a glimpse of the experience.  It’s beyond words how amazing that time was, especially considering how it translated in the time spent on the saddle and even more the time spent together glorifying God and praying together before the altar.”

The details haven’t been finalized for next year’s ride, but Schaefer and Becker believe that Biking for Babies can and will grow to include more participants in their 1,000 mile rides as well as more smaller scale community rides like one that recently took place near St. Louis to raise money for their Illinois charity, Life Network of Southern Illinois. It was the first they had done and it raised $2,000 and brought together over 60 families and friends.

Since 2009, Biking for Babies has raised over $130,000 for pregnancy resource centers around the country and they’ve ridden over 4,600 miles.

“This year presented us with an opportunity to see and experience hope and to witness others’ authentic joy, even amidst trials,” says Becker, “With all the mishaps and unexpecteds, we came to appreciate all the more the beauty of life and discovered striking parallels between our trip and life.”