A study from the University of California Berkeley School of Public Health has attacked Live Action’s Abortion Procedures website along with other pro-life sites, claiming they are medically inaccurate and misleading in the information they provide regarding the abortion pill. The researchers (unsurprisingly) claimed that Planned Parenthood — the nation’s number one abortion provider which commits 40% of the country’s abortions — presented the most accurate information.

The Daily Californian, UC Berkeley’s student-run newspaper, publicized the findings of the study, which examined the five most presented websites on Google for searches on the abortion pill. “Abortion is a particularly contentious and polarized topic in (the United States), and that makes it particularly susceptible to disinformation online,” claimed Betsy Pleasants, the lead researcher and a first-year doctoral student. “There are a lot of organizations that have a strong presence online that are anti-abortion.”

And yet, Pleasants would do well to realize that being “anti-abortion” does not make an organization untrustworthy on providing information about the abortion pill. In fact, it seems more logical to distrust information from organizations which directly profit from the sale of those drugs — to the tune of $200 million annually.

According to Pleasants, Planned Parenthood’s abortion pill information was over 80% accurate, with “factual information related to medication abortion side effects, how one can access these medications and presented that information and more, in a ‘usable format.'” Pro-life sites, however, were accused of spreading misinformation.

But let’s take a look at the problems with this study. First, here’s a screenshot showing how Planned Parenthood describes the abortion pill procedure: 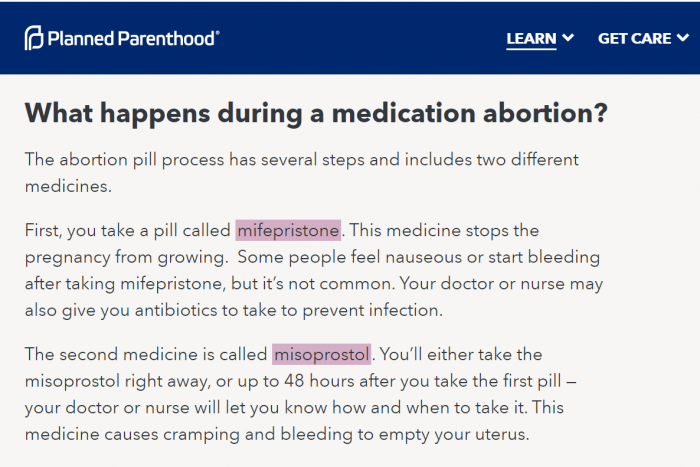 And here’s a screenshot showing how AbortionProcedures.com describes it:

Clearly, the Abortion Procedures description gives more detail about how the abortion pill regimen actually functions. Yet Planned Parenthood’s vague description is considered by the study’s authors to be more accurate? (Maybe researchers simply disliked the use of the terms “mother” and “baby”…)

Additionally, Abortion Procedures gives more information, such as the failure rates and facts about fetal development. Those facts may not encourage a woman towards abortion, but that doesn’t make them any less factual.

To see even more evidence of Planned Parenthood’s vague descriptions of what happens when a woman takes the abortion pill, see its video here (in which a preborn child of up to 11 weeks is depicted as a dot), and compare to Live Action’s Abortion Procedures abortion pill video here along with actual photos and footage showing what preborn children look like in their first 10 weeks of life:

Pleasants has a website where she describes herself as “a public health practitioner and research [sic] invested in exploring and addressing sexual and reproductive health inequities.” Karen Weidert, a co-author, is the executive director of the Bixby Center for Population, Health, and Sustainability; her biography cites “15 years of experience in international and domestic program management to the Bixby Center’s ongoing efforts to increase access to family planning and safe abortion in sub-Saharan Africa.” Another co-author, Sylvia Guendelman, is chair of the World Health Organization’s panel on Reproductive Health for the Americas.

In other words, all of the study’s authors support abortion — and Guendelman specifically told the Daily Californian that she wants to see Planned Parenthood viewed more positively. “Organizations like Planned Parenthood … have been so discredited that it’s about time to bring back credibility and trust,” she said. “This organization is not only important in providing healthcare services, but also healthcare education around sexual and reproductive health. We want to be able to reduce abortions and reduce unwanted pregnancies.”

Weidert, meanwhile, complained of recent pro-life successes, claiming, “We have seen an onslaught of abortion restrictions in this country in the last decade, and the anti-choice movement is gaining momentum. It is critical that abortion-related information is accurate and can facilitate informed and responsible decision making.”

She followed that up in an e-mail to the Daily Californian, saying, “[I]t does seem like whenever there is pro-choice momentum, the anti-choice movement hijacks the conversation with hyperbolic rhetoric and disinformation to incite public outrage and gain support for policies which inhibit access to abortion care.” (emphasis added)

These hardly seem like a trio of unbiased researchers without an agenda in mind.

The methodology listed by the Daily Californian is extremely vague. The researchers reportedly made their determinations based on unspecified “clinical recommendations from the American College of Obstetrics and Gynecology [a pro-abortion organization], clinical information from a colleague and other information deemed important for anyone who uses Google to learn about medication abortion.” (emphasis added)

Some questions arise from this information: What clinical recommendations? Who was the unnamed colleague they worked with? What information was “deemed important” and by whom?

Live Action’s Abortion Procedures site is transparent on these issues, at least; the sources for the information are made readily available and physicians — including a former abortionist — reviewed the information to ensure its accuracy.

It’s not unusual for pro-abortion activists to attack the pro-life movement with biased and misleading “research” and “fact checks.” Presenting this misinformation and prejudice as a legitimate study is an easy way to further mislead people and cloud the reality of the agenda at hand.