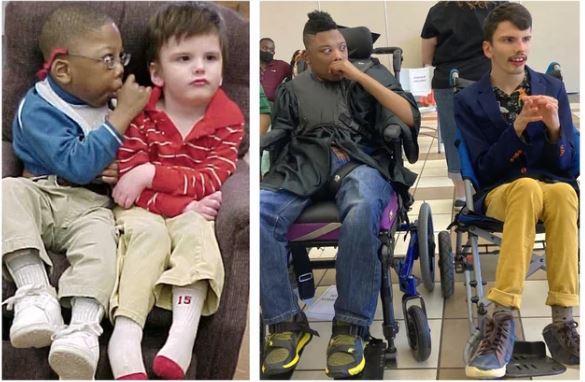 Best friends Jordan Granberry and Odin Frost met at school when they were just three years old. Each of them had been deprived of oxygen at birth and were given very low chances of survival. However, despite the odds stacked against them, the two graduated from high school on July 18, side by side as they have been for the last 15 years.

Odin’s father, Tim Frost, shared two pictures of the boys on Reddit—one from age 3 when they first met at Wayne D. Boshears Center for Exceptional Programs and the second at their graduation at age 18. It was an accidental recreation of the photo from the day they met.

“Their very first day of school, they were put in the same classroom,” Tim Frost told CBS News. “They pretty much had this immediate bond. Neither one of them could speak, but wherever the other one was, they were always together.”

Best friends given a two percent chance of survival at birth defied the odds to re-create their first day of school photo — at their graduation. The parents of Odin Frost and Jordon Granberry, both 18, were told their sons would never walk and would live in a "vegetative state" – if they survived their early years. But the pair exceeded expectations to make it to school – and an adorable photo shows them on their very first day, aged three, sharing a seat. From that day forward the pair were best buds – sharing a special bond despite being nearly completely non-verbal. And this week they re-created that photo on their last day at school, when they officially graduated high school and collected their diplomas.

Frost explained that while pregnant, his wife had preeclampsia and doctors had to induce labor. When Odin was born “he was barely, barely breathing.” Odin was airlifted to a NICU in Dallas, which the family learned was the same NICU where Jordan had been about two weeks prior. Doctors said Odin didn’t get enough oxygen during labor and had a two percent chance of survival. If he did survive, he was expected to be in a “vegetative state.”

Jordan had similar story to Odin’s and did not get enough oxygen at birth. Because of resulting brain damage, Jordan’s mother Donna was told he would not live to age seven.

Odin defied doctors by beginning to walk with braces by age four, surprising his parents by getting out of bed and walking around the house. “We were just bawling, crying because they said he would never do that,” explained Frost.

Odin then began to push Jordan in his wheelchair, standing next to him acting like he was his guardian. “They had a cool little non-verbal communication,” said Frost.

As the boys grew and would end up in different classrooms, their parents kept them connected through monthly meetups during which Jordan’s mom Donna, a hairstylist, would cut their hair.

Though the families were nervous about attending high school graduation amid the COVID-19 pandemic, they both ultimately decided to go, calling it a “once-in-a-lifetime thing.”

After the graduation, the families celebrated together complete with a bottle of champagne for the proud parents. The boys will continue their education at the Wayne D. Boshears Center for Exceptional Programs, which provides schooling for individuals with special needs up to age 21.

“It’s something we thought would never happen,” explained Frost. “We didn’t think he was going to live… now he’s walking the stage and graduated. For me, it was kind of surreal.” He said Odin gripped his hand as they walked across the stage together. “You could feel the excitement in him.”