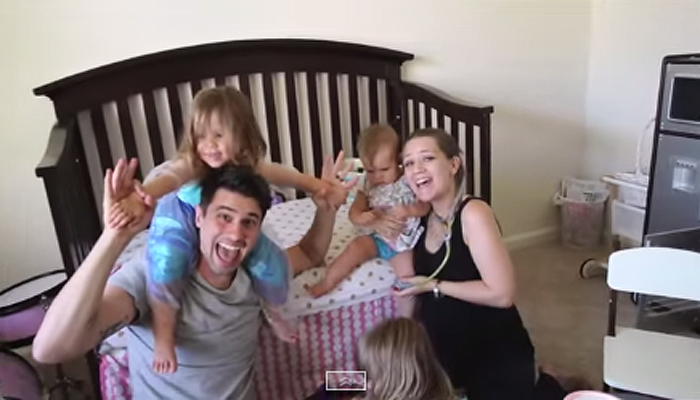 In perhaps my favorite baby announcement to date, two brothers and their wives let the entire family and their friends (and the world) know that they’re “having two more Murrays.”

The video, which is a parody of the popular and fun song “Shut Up and Dance” was created by videographer Jon Murray, his wife Danielle, Jon’s brother Aaron, and his wife Liz.

Jon and Danielle have three young daughters and Aaron and Liz have one little girl. Their lyrics are pure joy and a true reflection of how people often respond to a couple’s announcement that they’re having another child.

The Murrays are adorable and it’s obvious they all love being parents – no matter the difficulties, stresses, or sleepless nights. But my favorite lyrics are:

The babies aren’t due until December and January, but the parents already know that their children’s lives have meaning and purpose. How great is that? And they admit, they can’t go back. They’re pregnant and they’re having babies, and they’re thrilled about it.

In a world where people are inclined to think 2.5 babies are .5 too many or that a higher bank account and more material possessions are of greater importance than children, this is the most refreshing and fun baby announcement yet.