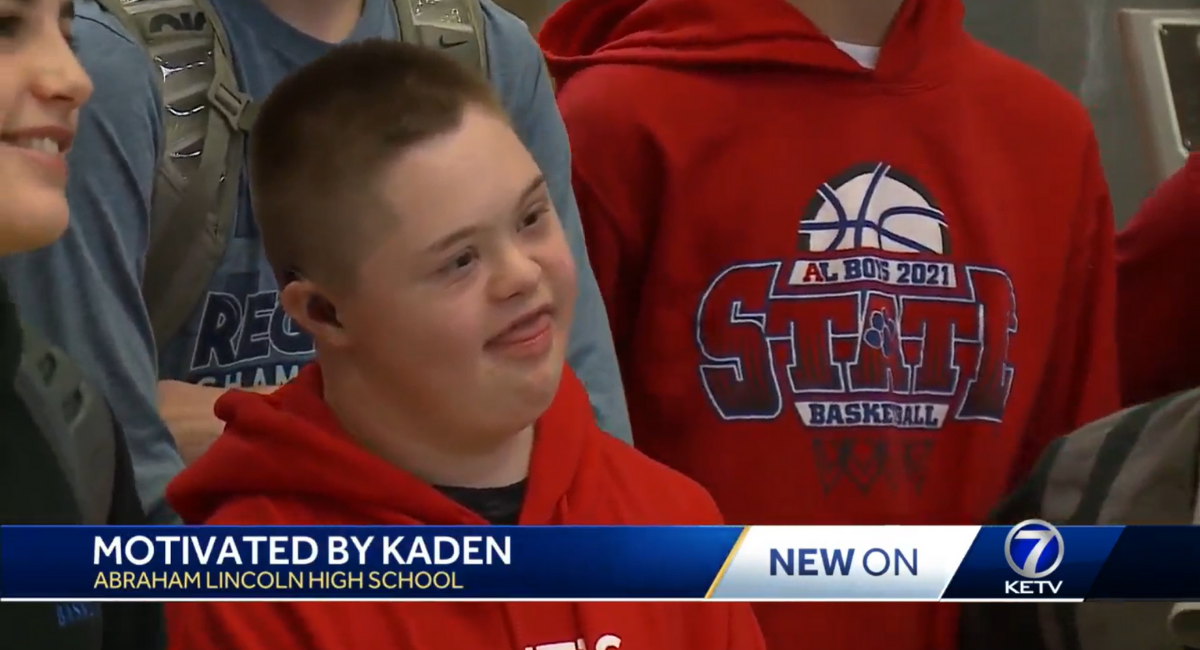 A teenager with Down syndrome is more than just another member of the basketball team at Abraham Lincoln High School in Council Bluffs, Iowa. He’s the glue that holds them all together.

Fifteen-year-old Kaden Boettger has always been passionate about sports. Even in elementary school, he played soccer, hockey, baseball, and basketball. “He loves sports,” his stepfather, Greg Rangel, told the Omaha World Herald in 2015. “He made it to state in basketball last year [in the Special Olympics].”

Today he’s still playing basketball, now for the Abraham Lincoln High School freshman boys’ team. And according to KETV Omaha, he is by far the team favorite.

“We’ve had some close-knit groups but these guys are pretty unique, how close they are together,” Jason Isaacson, the team’s basketball coach, said. And the team says Boettger keeps them motivated.

“We don’t perform as well when Kaden’s not on the court, I mean the one game he missed we just played horrible the whole second half,” team member Isaiah Lusajo said.

Joseph Monge added, “I think it’s also motivation to have him play so we’re motivated to score more so he can go back in. And when he scores, we all go hype on the bench.”

Boettger’s mother, Megan Rangel, said Down syndrome never holds him back. “He can do anything he wants. He doesn’t stop until he gets what he wants,” she said, adding that the bond between Boettger and his teammates means a lot to their family. “They include him in the game, outside of the game. That’s all he talks about is his teammates.”

There is a widespread assumption that people with Down syndrome lead miserable lives filled with suffering and that they are burdens on those around them — and that this is why they must be eradicated through abortion. Yet people like Boettger prove that this is not only false, but that this attitude is a sign of ongoing ableism towards those who are different.

Kenny Neelon, another one of the coaches, said Boettger’s attitude is what helps the team to succeed. “It’s hard not to be positive around Kaden and want to include him because of the positive energy he brings every day,” he said.