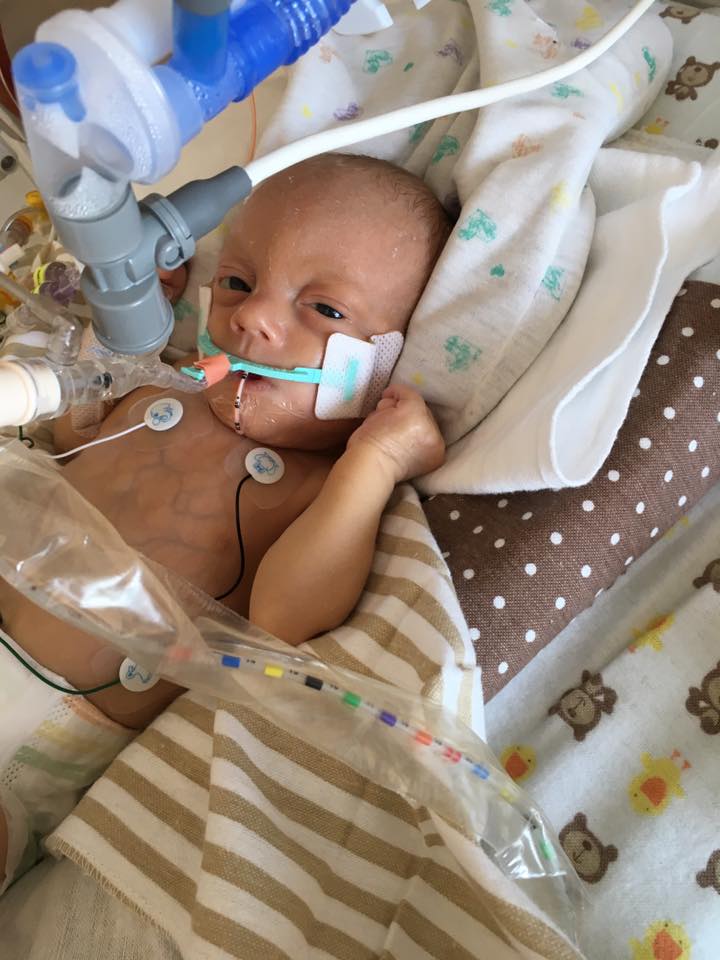 In November of 2015, Greg and Heather Puruleski learned that their fourth child, Jonah, had Trisomy 18, also known as Edward’s syndrome. Parents of children diagnosed with this condition prenatally are often advised to abort their baby, but this couple refused and worked to give their son every chance possible.

Now that Jonah is over one month old, his parents are still fighting to save him, because insurance has denied the surgery he desperately needs.

Baby Jonah, while still in the womb, was also diagnosed with a heart condition that would require surgery: a surgery the local hospital – Helen DeVos Children’s Hospital – refused to provide. So the couple turned to the University of Michigan, which agreed to perform the surgery. On April 26, 2016, Jonah was born via c-section at the University of Michigan, weighing just 3 pounds, 12 ounces. Although doctors predicted he might not survive birth, or live long after birth, his mother wrote on Facebook that he was doing well.

“[He’s] Doing excellent. He’s on CPAP in NICU but breathing just like any other baby at 37 weeks,” she wrote. “Thank you all for the prayers. We are blessed!”

However, after doing an echocardiogram on his heart, doctors at the University of Michigan decided that they would not perform the procedure Jonah needed after all. His parents were devastated and reached out for second opinions from other hospitals.

“We pray someone will accept Jonah’s condition and agree to place a stent to keep a pathway open in his heart,” wrote his mother on Facebook. “We are pleading with God at this time. This is Jonah’s shot!” His parents celebrate Jonah’s one month birthday. via Facebook.

However, hospital after hospital turned the family down. On May 6th Heather wrote:

Day 10: This is the 10th sunrise from Jonahs room… When you go into the hall you see busyness and life moving along. When you enter my room it’s like time has stood still. But there is a joy in the room because it’s sweet Jonahs place. A place where a strong, fighting little boy has touched the lives and hearts of many. He’s changed me for the better. He’s changed the world for the better.
Is this Gods purpose and mission for Jonah? […]

As I begin this day I’m thankful for another day with Jonah.. Thankful he’s so peaceful and comfortable. Thankful he’s so awake and responsive to my voice. I love this baby more than anyone can imagine. The heartache and pain I feel daily has all been worth it. Life matters.

Then, finally, hope. Two hospitals stepped up and said they are willing to do the surgery and help Jonah live. But now, Priority Health, the family’s insurance company, is denying the surgery.

Donations began to pour in to the family in hopes of raising enough money for the family to pay for the hospital transfer and surgery. In the meantime, Jonah’s health has ups and downs, as he battles daily for his life.

“If (Priority Health) would just hold Jonah and see the fight that we’ve put up since the day we got the diagnosis…It’s just been a constant, constant battle for everything for him,” Heather told the local Channel 8 news.

With a successful surgery, Jonah would have hope. He would likely need more surgeries and specialized care, but these services are proving helpful to people with Trisomy 18, with some living more than a decade. His parents want to bring their son home to be with his siblings, even if he only lives for a short time. They want to be a family, but insurance – the one they pay for every month – is standing in their way.