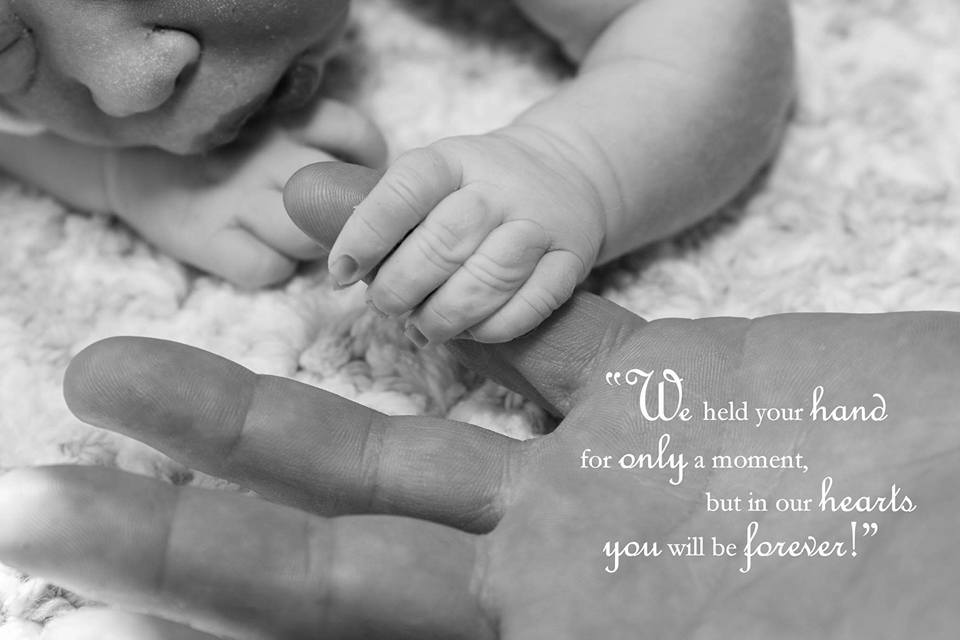 Miriam Grace Mahner, born on August 22, 2017, lived outside the womb for 46 minutes. In that short time, she met countless friends and family members, including her 11 older siblings.

Already facing a high-risk pregnancy due to complete placenta previa, it was during a 14-week ultrasound that Ann Mahner first heard the word “anencephaly” used to describe her daughter. She had volunteered at the local pregnancy resource center two days earlier as a model for staff to practice on the new ultrasound machine. They could see that something wasn’t right, but without the doctor present, no diagnosis could be made.

“I had a feeling beforehand that there was something not right about the pregnancy,” she told Live Action News. “With a lot of my miscarriages I was really sick, so I kind of had an idea there might be something wrong when I went in.” 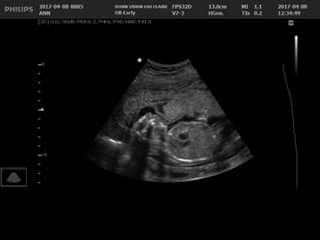 20 week ultrasound of Miriam (Photo courtesy of the Mahner family)

Thankfully, Ann’s doctors were supportive; the medical team even prayed with her. But then she faced the difficulties of having to tell her husband the news and of learning more about the diagnosis.

“It was all about the uncertainty…. Are you going to miscarry? Are you going to carry to term? Are you going to decide to deliver early? They always try to push that option and then [you see] the very low percentage of babies that sometimes do survive many months or years,” said Ann. “[You think] well, God, I can handle anything but I’m not so sure I can handle having a special needs child, because we have so many kids at home and it’s such a struggle as a family to have to deal with that. But then the longer the pregnancy went on for me, [I felt] that would be one of the best outcomes… to raise a special needs child versus having her pass away. You go on an emotional roller coaster from one extreme to the other.”

Ann considered the idea of delivering baby Miriam early. Her due date was at the end of August, but complete placenta previa meant she would need to deliver by C-section — and the longer the pregnancy went on, the greater the risk of hemorrhaging and death if she didn’t get to the hospital quickly enough. 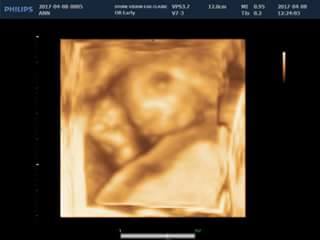 18 week ultrasound of Miriam. (Photo courtesy of the Mahner family)

She and her husband Karl decided to wait and pray about their decision. Then Ann went to Mass one morning and left feeling at peace again. She knew that God wanted her to say yes to Him and to do what He was asking. That meant carrying Miriam for as long as possible, hopefully to term.

“[A]s soon as I said, ‘Yes, I’m going to do whatever it takes’, that complete peace came back over me again. It was one of those God-grace things that I can’t even explain. Everyone around me could see it…. I was at peace during that whole beginning time because I knew I was doing what God wanted. And when you know you’re doing God’s will, you can be at peace because you’re with God and He’s going to take care of you.” 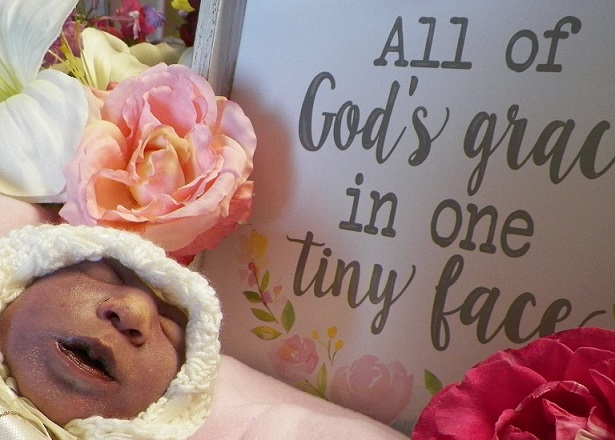 Ann’s husband, however, was struggling with the idea of raising a child with special needs. He wanted to accept God’s will, but had a hard time accepting what that might be.

Then, during the 20-week ultrasound, doctors found that the complete placenta previa had moved up and out of the way, which the Mahners call a complete miracle. The fear of rupturing and bleeding was gone; they wouldn’t have to deliver via C-section, and Miriam could arrive on her own schedule.

But carrying Miriam to term was met with both support and criticism from those around them. Every decision they made was scrutinized. One woman even asked if it would be better for the baby if they were to end the pregnancy. 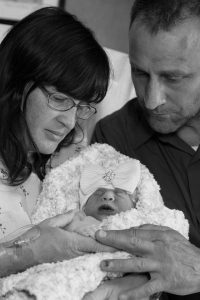 When it was time for Miriam to be born, the couple headed to the hospital, but Karl Mahner was still struggling. “I didn’t want to be there,” he explained. “I didn’t want anything to do with this. This is too painful.”

“We get closer and closer and then at some point they say it’s time,” explained Karl. “The baby is coming now. And the nurse said, ‘There’s two priests outside in the hall pacing like expectant fathers.’ So they both came in. I was afraid we’d have none and now we had two.” 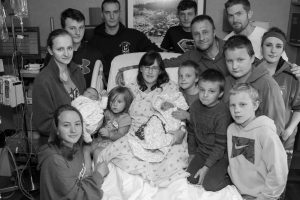 “She basically did not breathe; she didn’t move,” explained Ann. “She did take a couple of really short breaths as they were passing her around and everybody was holding her. I didn’t get to see it, but my husband did. They checked her heartbeat until they couldn’t hear it anymore. All the kids were there, my parents. I had a full room.”

As people took turns holding Baby Miriam, there were many tears. A photographer from Now I Lay Me Down To Sleep arrived to take photos of the family with their newest daughter. 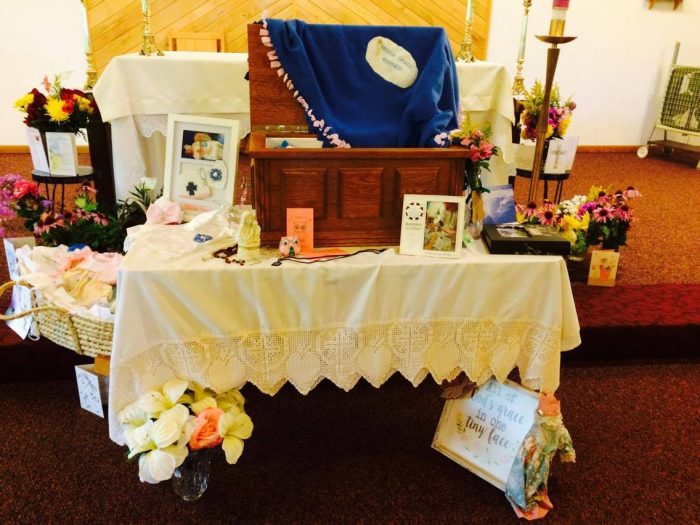 The family held a funeral and were shocked at how many attended — even strangers. Karl’s brother Chris built the casket, and Miriam was buried in a gown made from a wedding dress, created by Little Angel Gowns.

“This church was so full,” said Karl. “I don’t know how many people were there. A lot of them we didn’t know that well. My wife said to me, ‘Did you ever consider that maybe some of these women have suffered loss and had no real closure?'”

At the end of the funeral Mass, it came time to walk across the street to the cemetery to bury Miriam in a spot the family had dug themselves since they had no money to pay for a funeral.

“My wife looked at me and said, ‘I carried this baby for nine months; I will carry her the rest of the way.’ We carried that baby in the casket all the way to the cemetery,” said Karl. “It was just beautiful, super beautiful.”

Miriam’s older sister Veronica, 17, made a video for a class assignment focusing on the value of Miriam’s life. To date, it has been viewed over 48,000 times, and Veronica, one of the founders of her teen pro-life group, is in the process of making a second video.

Now that Miriam has left this world, Karl looks back on the day that he so feared as one of the best of his life. Nurses kept coming into the birthing room, not so much to give support, but instead to take part in the joy of seeing a family welcome a child that many others would not. It brings a sense of hope that few get to witness.

Ann says accepting Miriam and loving her for as long as they were given was much more of a blessing than it was painful:

The grace that you receive from accepting this and accepting her and loving her is way more than any of the pain. It’s like parenting any child. You struggle through the rough roads with a kid – the screaming, the bawling, and the fighting. You struggle through that with any child and yet you know you love that child more than anything. It’s the same thing with a child that you know will die before birth or at birth. The pain is nothing compared to the love you receive from that child and from God. […] I always knew from the beginning that Miriam was not created for just us but for so many others. Her story and the many others being born daily are examples for the world to see love in the midst of pain.

The Mahners found joy in carrying to term, meeting Miriam, and being able to spend time with her alive and after she died, thanks to the Cuddle Cot. They hope all families will allow their children to be born, no matter what their diagnosis.

“[…] Abortion is not an end to suffering, it really is only the beginning,” said Ann. And while she knows nothing can take away the pain of losing a child, she says she saw “regret in the stories of the moms that chose to terminate the pregnancy early and never in those that carried to term.”