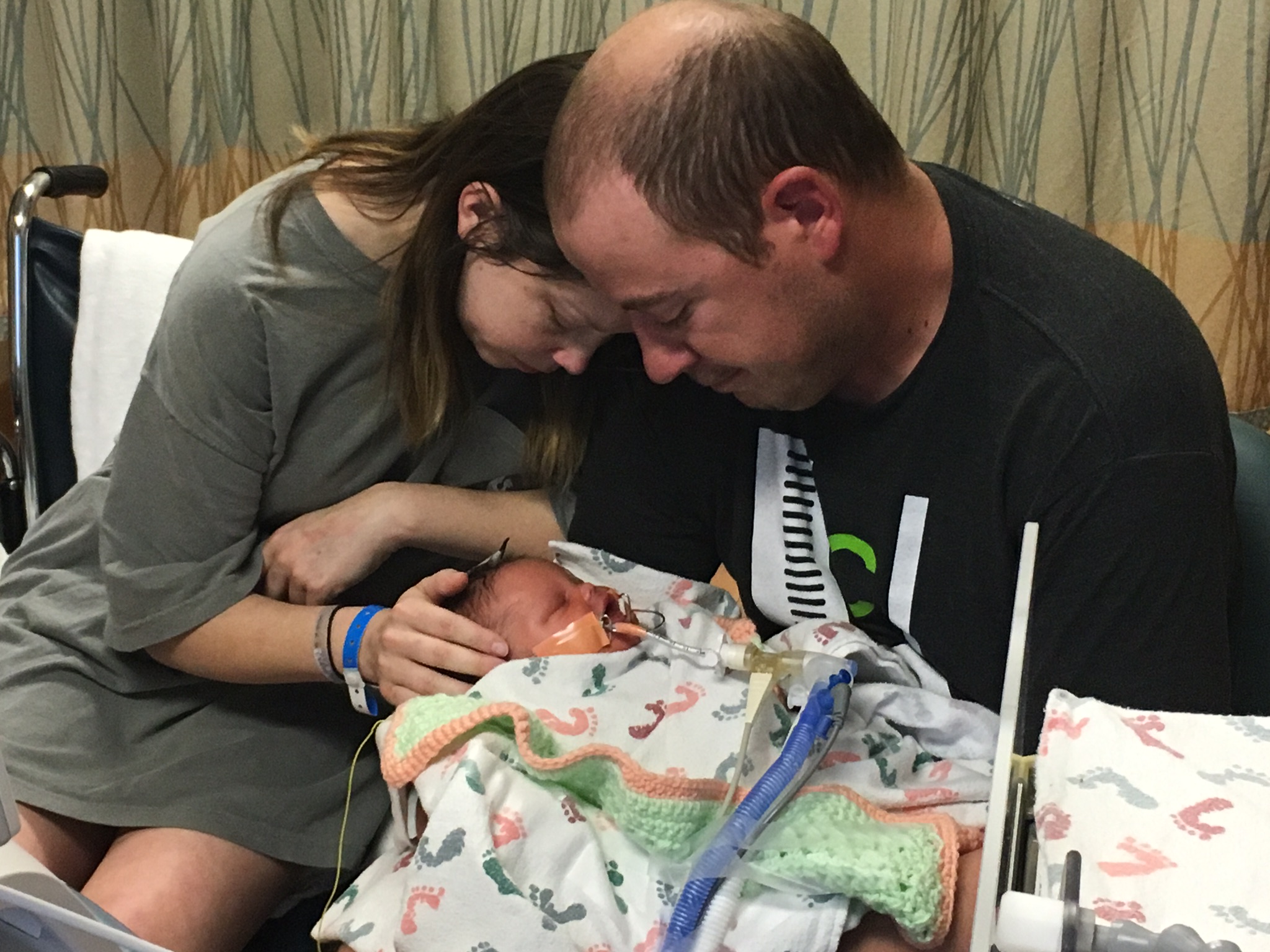 When Brittany and Kory Cleveland realized Baby Issac was on the way, they were delighted. Issac was the most wanted and desired little boy, and Brittany was overjoyed when she saw her positive pregnancy test light up after a short time of hoping to get pregnant. She spent hours looking for a creative way even to tell her husband Kory, who was as thrilled she was. The young couple was living the dream of their life together, until it became a nightmare no parent ever wants to experience.

Brittany, a teacher, and Kory, a teacher and coach, come from a small town in East Texas, but the year they conceived Isaac, they lived in Big Spring, far from family, in West Texas. Brittany was always a bit concerned about becoming pregnant because she had been diagnosed with Type 1 Diabetes in her junior year of high school, which meant closer monitoring of her pregnancy. “I had more sonograms,” she told Live Action News, “which was my favorite part of the doctor visits anyway.” So she took advantage of it. “I decided to do a 4D sonogram and get a bear with his heartbeat in it at 30 weeks, and I remember just sitting and staring at those pictures, knowing that in about eight weeks we’d be family of three.”

Their doctor had told them diabetics usually deliver their babies early, so 38 weeks was the plan. And Issac’s parents were ready to meet their blessing. But nothing prepared them for what happened a few days after a seemingly wonderful doctor’s visit on July 6, 2017. That day, Brittany had her 33-week check-up, complete with sonogram. Everything was pronounced as it should be.

READ: Hauntingly beautiful photos include silhouettes of couple’s daughters who died in the womb

“Issac looked great. I met with my doctor and he complimented how good everything was looking, and we talked about my next appointment, no worries or concerns. I left the office so proud of how I had gotten my blood sugar levels lower than they were, and more anxious about our boy joining us.” A few days later, Brittany was going through clothes from the baby shower when shewent to bed extremely tired, and that seemed to be the dark turn.

“The next day,” she says, “I woke up completely miserable. In pain, nauseous, and with no desire to get out of bed. So I didn’t, until I knew I was about to throw up.” She spent the rest of the day watching TV from bed, trying to rest, but it wasn’t going well. She recalled the next moments for Live Action News:

I called the doctor’s office and talked to a nurse, who told me that I needed to time my contractions for an hour and call her back. I had absolutely no idea what I was doing. I couldn’t tell when one would end and another one would stop because it felt like the pain was so consistent. The nurse recommended that I go ahead and go to the hospital, just to be safe, and if it wasn’t anything concerning, they would send me home. As soon as Kory got home from work… we quickly packed up stuff for all three of us, put the car-seat in the car and drove to Midland.

That was about 9:30 p.m., and they were quickly admitted to labor and delivery. Hooked up to the fetal monitor, even connected to oxygen to improve the efficiency of oxygen to the baby. Nurses called the couple’s doctor and at first, everything looked good in the sonogram, but by 11:30 an emergency C-section was needed because baby Issac’s heart rate kept dropping. He might just have to stay in the NICU a while, they told the couple, due to being born prematurely.

Issac Kole Cleveland was born at 1:51 a.m., July 11. He was blue and not breathing on his own,” Brittany told Live Action News, “[but] thankfully the neonatologist was able to get medicine to him that helped.” Issac was then transferred to the NICU in Odessa, and Brittany and Kory were suddenly left in the hospital without their firstborn child. “We didn’t know what to think or do. This wasn’t the way that we ever planned for this to happen,” she says. 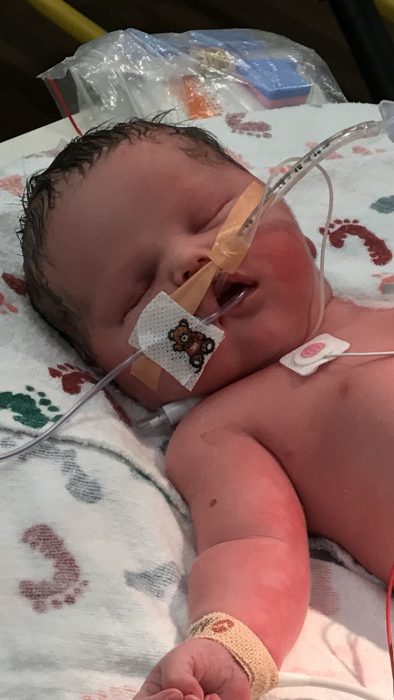 Baby Issac shortly after Brittany had gone back into the recovery room after her c-section.

Daily updates from the NICU in Odessa came, while Brittany was still in the hospital. The updates were mixed, but their faith kept them going. When Brittany was released, they headed straight for Odessa to see their son. 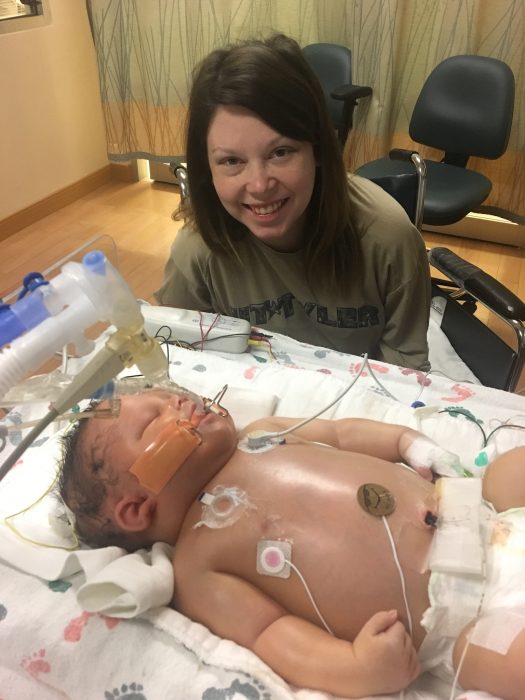 The first time for Brittany to see Issac after he was born, in the Odessa NICU.

“He was hooked up to all kinds of machines and wires were everywhere, making it impossible for either of us to just pick him up and hold him,” Brittany says. But the tragic news came the next day:

A day later, the doctor told us that there was no coming back from what had happened. Issac had gone too long without oxygen getting to his brain, and the machines were the only thing keeping him alive. Together, with our parents and my brother, we went in, held our boy for what would be the first and the last time, took pictures with him and tearfully said our good-byes.

At 11:27 p.m. on Friday July 14, 2017, our boy opened his eyes for the first time and saw Jesus. He never had to experience hurt or heartbreak on this earth, but oh how our hearts long for him to be here with us. What a wonderful day it will be when we get to see him again in eternity. 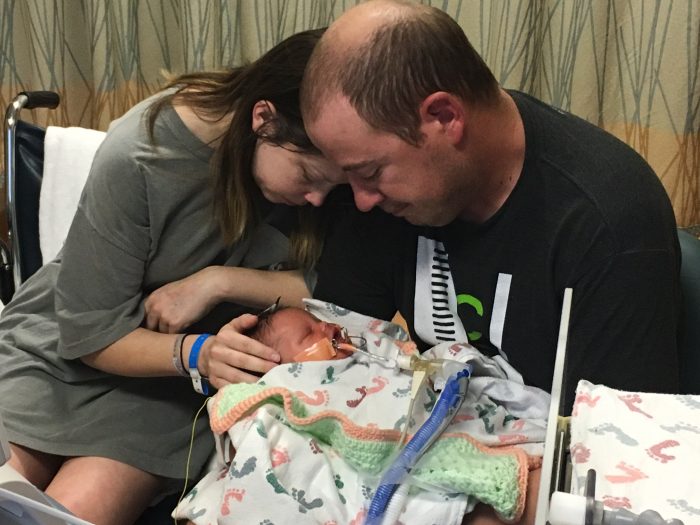 The first and last time Brittany and Kory got to hold Issac. Here they are saying their goodbyes to their son.

While Brittany and Kory’s journey has not been easy, a key factor in Brittany’s healing has been her involvement in an organization called Hope Mommies, a Christian nonprofit which has the sole purpose of “com[ing] alongside moms and families who have experienced infant loss, bringing comfort, encouragement, companionship, and hope as they continue to walk this side of eternity without their beloved son or daughter.” While Brittany was in the NICU in Odessa after losing Issac, she was given a Hope Box. While the boxes cost money to put together with items to comfort a grieving mother, they are donated and given without charge to the mother.

The impact of the Hope Box on Brittany was so strong that she remained involved with the organization. She says, “When I went to my first retreat, in March 2018, after losing Issac I just felt the Lord put it on my heart consistently to start a chapter…. We have monthly get-togethers, [and we] are going to host a 5k in October for pregnancy and infant loss awareness month. We will put together hope boxes and distribute them to hospitals in our area for moms who are experiencing loss.” 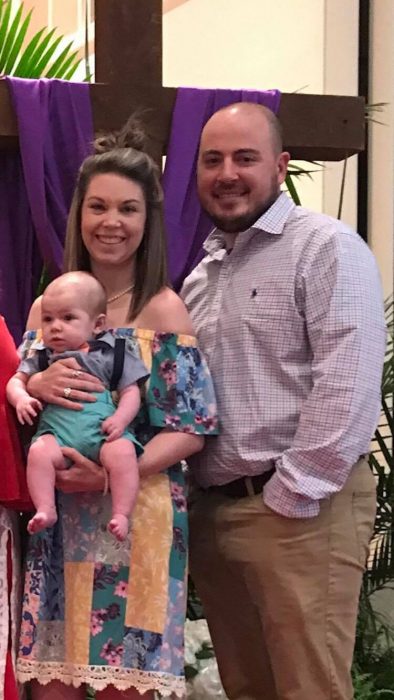 But Hope Mommies wasn’t the only instrument of healing for Brittany. Both she and Kory were thankful to receive jobs back in their native East Texas, where they could be closer their families, and they suddenly became pregnant again, far more quickly than they expected. They named their rainbow baby in honor of his big brother: Konnor Issac Cleveland.

Brittany says, “While we miss Issac every day, we are so lucky to be his parents and hope to keep his memory alive by helping other grieving families.”