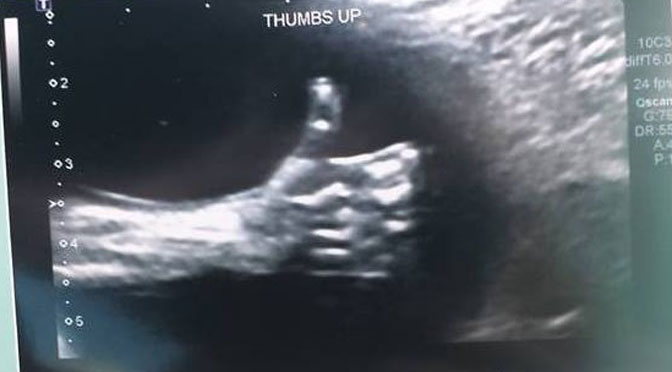 Nicole Kim was feeling a bit down before she went in for the 20 week ultrasound of her third baby. Her husband Tony had recently been laid off from his job, but on this day, Kim was more focused on learning if she would be having a baby girl or boy. Still, when her preborn son gave her an adorable thumbs up, Kim felt reassured about her family’s future.

Kim told the Calgary Herald that the technician saw the thumbs up and quickly zoomed in to snap the uplifting photo, which is now displayed in a frame at the family’s home. After sharing the ultrasound image on Facebook, it went viral.

“For me, it just made it seem like everything was going to be OK,” Kim told TODAY. “Living in Calgary, there’s a lot of people being laid off right now, and it’s hard for our families. We know two other families dealing with it. I think the reason this went viral was because people wanted something to be happy about.”

Baby boy Kim is due this summer and his big brothers, ages 3 and 5, are eager for his arrival, kissing and hugging their mom’s belly. They think the thumbs up their baby brother gave is pretty cool.

Ultrasound images continue to showcase the humanity of preborn children. While pro-abortion groups try to hide the truth of life inside the womb, it’s becoming more obvious to society that there is human life that exists before birth.