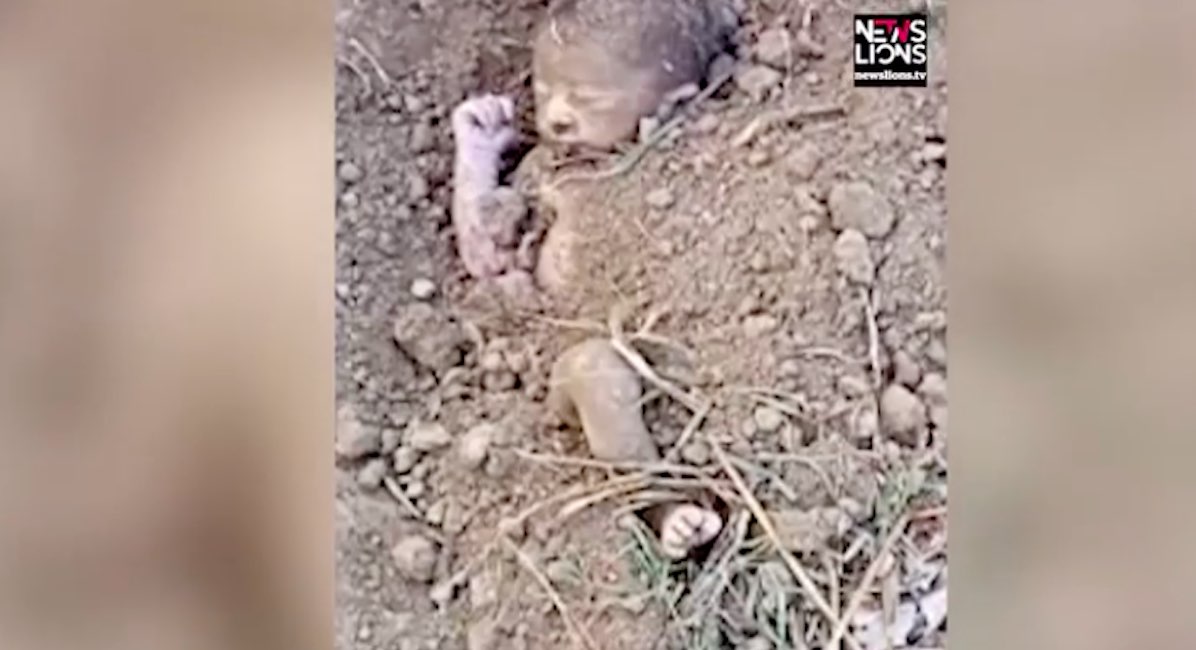 (Right to Life UK) A newborn baby girl has been rescued by shocked locals after being found buried alive in a field in India.

The newborn was buried in a field in Khatima, a town in the Indian state of Uttarakhand, when she was spotted by a labourer.

According to reports, the labourer spotted the baby’s face sticking out of the ground along with her right arm and leg. It is believed she was purposefully buried alive.

Video footage shows locals and the police saving the baby out of her shallow grave among the roots, stones and dirt. In the clip, the baby is covered in mud and does not appear to move as she is swaddled in cloth for warmth and protection.

The abandoned baby girl was rushed to the hospital and reports say she is now in a stable condition.

Not an isolated incident

This is not the first time a baby girl has been found buried alive.

In December 2019, while digging a grave for a still born baby at a village crematorium in Northern India, labourers uncovered a three day old girl wrapped in cloth inside a sealed clay pot three feet underground.

Similarly, in January of last year, a three-week-old baby girl was found buried alive after her faint cries were heard by a local in Uttar Pradesh.

Census data from 2011 showed there were 919 girls to every 1,000 boys for children up to the age of six. In some northern states that ratio was as low as 830, according to the United Nations Population Fund (UNFPA). The natural ratio is 105 boys to 100 girls.

A recent report from India’s Government also found an estimated 63 million women were “missing” from the country’s population.

In fact new research suggests that the lives of almost 5 million baby girls in India will be lost over the next decade due to the widespread practice of sex-selective abortion.

Last year, it was revealed out of 216 births across dozens of villages in northern India, over a 3 month period, not a single girl was born.

Social worker Kalpana Thakur said at the time that the authorities were not doing enough.

“No girl child was born for three months in these villages. It cannot be just a coincidence. This clearly indicates female foeticide is taking place in the district. The government and the administration are not doing anything.”

Sex-selective abortion is a well-documented problem in countries around the world, resulting in highly skewed sex ratios.

Since amending its abortion law in 1998, sex-selective abortions have become a major issue in Canada.

An article in the Canadian Medical Association Journal describes how “easy access to abortion and advances in prenatal sex determination have combined to make Canada a haven for parents who would terminate female fetuses in favour of having sons…”.

Similarly, evidence of sex-selective abortions has been found in the Australian territory of Victoria, which introduced abortion on request in 2008.

Following the law change in Victoria, Dr Mark Hobart was investigated by the Medical Board of Victoria for failing to refer a woman for a sex-selective abortion. Additionally, an investigation by Australian broadcaster SBS found higher numbers of boys than girls being born in some ethnic communities in Australia.

A study from La Trobe University, analysing more than a million births in Victoria, suggests some parents could be aborting unborn female babies in order to have a son.

In the UK, shadow Minister Naz Shah has previously called for the Government to stop the misuse of Non-invasive Prenatal Test (NiPT) after evidence emerged they were being used to abort pregnancies based on gender.

The Labour MP said: “The government needs to look into this exploitative practice and enforce appropriate restrictions.”

However, Ms Shah is presumably okay with disability-selective abortions as she also said: “NIPT screenings should be used for their intended purpose, to screen for serious conditions and Down’s syndrome.”

Polling, conducted by Savanta ComRes, showed 89% of the general population and 91% of women agree that gender-selective abortion should be explicitly banned by the law.

Right To Life UK’s spokesperson Catherine Robinson said: “Sex-selective abortion and infanticide is a deeply wrong and sad phenomenon. Fortunately, this baby girl was rescued but many are not so lucky.”

“This is a significant problem in Canada too and even in the UK where evidence has emerged that Non-invasive Prenatal Test (NiPT) is being used for sex-selective abortions.”