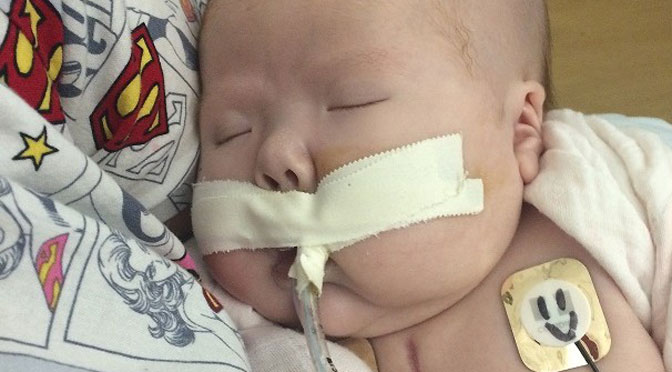 Stephanie Parra was 32 weeks pregnant when doctors handed her devastating news. Her baby girl had a heart defect that was so severe they didn’t think she would live more than a few hours after birth. They told Parra that she should consider abortion.

“I reminded the doctor that I was 32 weeks,” she explained. “But the doctor said that my baby was considered defective and that you can terminate up to 38 or maybe 39 weeks. I told her, no, termination wasn’t an option. We were going to continue the pregnancy.”

Parra was determined to help her daughter anyway that she could, and give her the best chance possible.

On December 8, baby Lily was born at 37 weeks gestation, weighing 7 pounds and 11 ounces. She was blue.

“She got intubated,” said Parra. “I got to see her the next morning at 4am. She was the biggest baby on the NICU unit.”

An MRI showed that Lily’s brain was smaller than it should be but doctors attributed that to her early birth and her heart defect. The more pressing matter was that Lily needed heart surgery, and she was given two shunts in her heart to help her survive. She did well after the procedure and at one-month-old she was able to go home, surprising the doctors who said she wouldn’t live more than a few hours. However, after one week, her parents noticed something was wrong.

“It looked like she had the hiccups and we worried she was having a seizure,” said Parra. “We took her to the ER and while my husband packed the diaper bag, I started recording what she was doing to show to the ER doctor.”

They learned at the ER that Lily was in respiratory distress from a bacteria she had picked up while in the hospital which was now in her lungs.  Lily was readmitted to the hospital and intubated. From there, things went from bad to worse.

An echocardiogram showed that Lily had mitral valve regurgitation, in which some of the blood leaks backward through the valve each time the ventricle contracts. In addition to her other heart problems, this influenced the doctors to determine that she would need to be listed for a heart transplant.

While preparing to put her on the list, doctors performed an MRI which showed that Lily had fluid on her brain. The doctor, Dr. Abd-Allah, determined that Lily would no longer be able to get a new heart.

“Dr. Abd-Allah said she wouldn’t be a candidate for a heart transplant because she would be developmentally delayed,” explained Parra. “So, of course, that made me super furious. I couldn’t believe what he was telling me so I said, okay, now I know what I need to do.”

Parra had Lily’s medical records sent to Dr. Holder, the doctor for the Special Olympics, and to a doctor at St. Joseph’s. She knew that what Dr. Abd-Allah was doing was unjust, and she needed to help her daughter.

In the meantime, Lily’s lungs were struggling. Doctors attempted to extubate her three times and told Parra that Lily probably wouldn’t be able to breathe without the machine. While looking through the medical records, Parra noticed that it stated if Lily were to have a new heart, her respiratory problems would improve.

Within days, Parra and her family had an online petition started to gain support for a transplant. A few days later they had a family meeting. Dr. Abd-Allah didn’t attend, but another doctor was there. He told them that the decision to not list Lily for a new heart wasn’t just because she might have developmental delays.

“He said she had kidney failure. He basically took the air out of me,” said Parra. “The next day I went to see Lily and I asked the nurse how she was doing on her new medication for her kidneys. The nurse said that Lily wasn’t on any medication for her kidneys. I asked the PICU doctor, who said that Lily’s kidneys were perfectly fine and that he didn’t know what I was talking about.”

Parra doesn’t know why she was told that her daughter had kidney failure – though she mentions on her online petition page that she believes it may have been a response to the growing outcry to allow a transplant for Lily – but one day she overheard the doctors and nurses in the PICU talking about how Lily had a 2p21 deletion, a syndrome of which genetic material from chromosome 2p21 is missing. Symptoms include failure to thrive, almond-shaped eyes, droopy eyelids, reduced muscle tone, and developmental delay. She was shocked since no one had informed her of this diagnosis. Doctors told Parra that because of this diagnosis, her daughter would have a poor quality of life and therefore, they would not list her for a heart transplant.

“[Dr. Abd-Allah] said, ‘I don’t have a bag full of hearts that I can give to everybody and I’m not going to waste a heart on a kid who might have disabilities,’” said Parra. “I told him, ‘You don’t know. You’re not guaranteed tomorrow. A person you give a heart to could die in a car accident on the way home from the hospital or decide that life isn’t worth it and start using drugs. Just because my child has disabilities doesn’t mean I love her any less than any other mother.”

Lily is currently still in the hospital while her mother spreads the word about the petition, and works with Dr. Tim Shriver to try to find attorneys to help her. Each signature she gets will help her try to force the doctor’s hand to list Lily for a new heart.

“If I’m willing to do everything and anything and give up my life so my daughter can have a life, then that’s what I’m gonna do,” said Parra. “[Doctors] shouldn’t stop me from doing what I want to do for my daughter.”