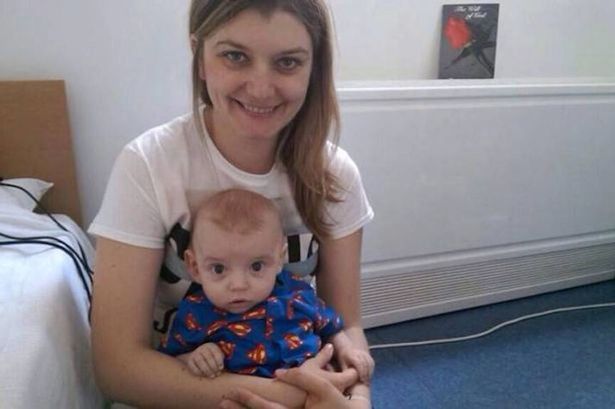 Oana and Alex Papaconstatinou were happily awaiting the birth of their second child: a brother for their daughter Emma. But during the pregnancy, Oana had this strange feeling that her baby was in pain.

“I remember feeling sort of odd one day during my pregnancy; it was less that I was uncomfortable and more that I thought my baby was in pain,” she told the Mirror. “It was a really strange feeling and it unsettled me.”

At a routine checkup, the baby’s heart rate was higher than usual but the doctor wasn’t concerned. After baby George was born, he seemed healthy, and Oana put her fears aside. However, George’s health started to change.

He wasn’t eating well. He wasn’t sleeping. He wasn’t thriving. They went from doctor to doctor, but each insisted George was perfectly fine. Still, Oana couldn’t shake the feeling that something was wrong with her baby. Emma and Alex with baby Georgie.

Then George started having night sweats and became more and more pale. One day while cutting his nails, Oana nicked his finger and the amount of blood was startling. He continued to decline until he wasn’t able to eat at all. Oana took him to the hospital, telling her family that she wouldn’t be back with him until he was better.

“George never got back, he never came home. My mother’s instinct had been right,” said Oana.

Tests showed that George had acute megakaryoblastic leukemia – blood cancer – and had likely had it since conception. He was treated with chemotherapy and started to show improvement.

“He was giggling and smiling and appeared to be pain-free for the first time,” said Oana. “We were delighted. We felt he was on the mend.”

But then, within just one day of finishing the course of chemo, the cancer was back. The doctors told Oana and Alex that there was no chance George would survive.

They family was put in touch with Children’s Hospice, who guided them through taking care of their son in his final days.

“We knew George was dying,” said Oana, “But there was still a tiny hope of a miracle in my heart and no one took that away from me. The thing about the hospice is that it wasn’t scary at all.”

The family spent two weeks together. Big sister Emma got to have tons of time playing with George. They went swimming. They took walks. They enjoyed family mealtime.

“And every minute he was teaching us,” Oana said of George. “Instead of thinking that we’d never watch him learn to swim, we thought it was wonderful that he was really enjoying the pool. We never worried that he was leaving us, we were just happy that he was there with us.”

Beautiful baby George died on July 5, 2014, just over five months after his birth. Oana wants people to learn from George’s short life that “life needs to be lived with intention,” and that’s exactly what she and her husband did with the time they had with their baby boy.