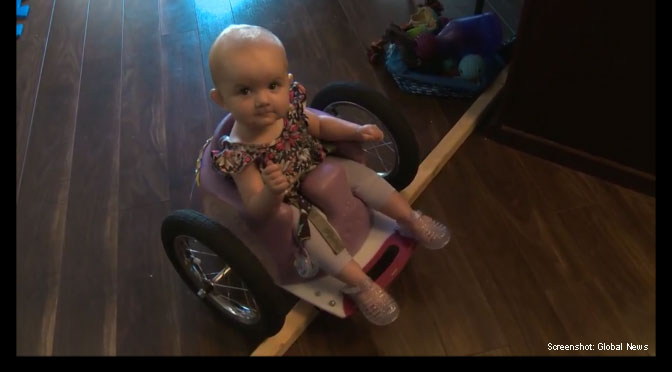 Eight months ago, at a routine appointment for her vaccines, four-month-old Eva Moore was diagnosed with stage four neuroblastoma. Within 24 hours she was on a plan that included eight rounds of chemotheraphy and emergency surgery.  At the end of treatments, little Eva would be paraplegic.

“It was in her heart, her spine, and her chest,” explained her mom Kim to Global News. “So basically her whole upper body was a tumor.” Screenshot from Global News report of Eva in the hospital fighting cancer.

Doctors tried to save her spine but couldn’t because the tumor was applying to much pressure on it, and it was severed.

Knowing their daughter wouldn’t be able to crawl and explore her world like other babies her age, her parents found an interesting idea on Pinterest – a baby wheelchair – and Eva’s father, inspired by love for his daughter, set to work to build one for her. It’s a simple but effective design made using a Bumbo chair, a cutting board, tike wheels, and castor wheels, and Eva loves it. Screenshot from Global News report of Eva in the hospital fighting cancer.

“It’s really funny. She clicks her wheels. When she gets really excited, she’ll click back and forth,” said her mother.

It has taken about two months for Eva to master the skills needed to get around in her chair but she is so good at it now that her parents had to install speed bumps in the house. Screenshot from Global News report of Eva cruising in her custom wheelchair.

“I just want her to feel accepted and just like any other child,” her mother explained.

Eva has now been in remission for 2 months and is doing well, adapting to life with a disability.

“When you think of cancer you often think of adults or maybe teenagers, but the fact is, four months old, sometimes at birth children are diagnosed with cancer,” Val Figliuzzi, executive director, Kids with Cancer. Screenshot from Global News report of Eva and her mom playing at home.

Illnesses and cancer can occur at any stage in life, but what’s hard to believe is that if Eva had been diagnosed just four or five months earlier she could have been marked by doctors as a target for abortion. Advocates for late-term abortion use children diagnosed prentally with conditions such as cancer as an excuse to keep abortion legal through all nine months of pregnancy in the United States and in Canada, where Eva lives. There are also those who believe we should be able to euthanize infants, a practice that is common in Holland where 650 babies were killed by assisted suicide in 2013.

Eva is a beautiful and resislient child with a full life ahead of her. Her mother says they will continue to support her and help her through physical and occupational therapy and by giving her a normal life.