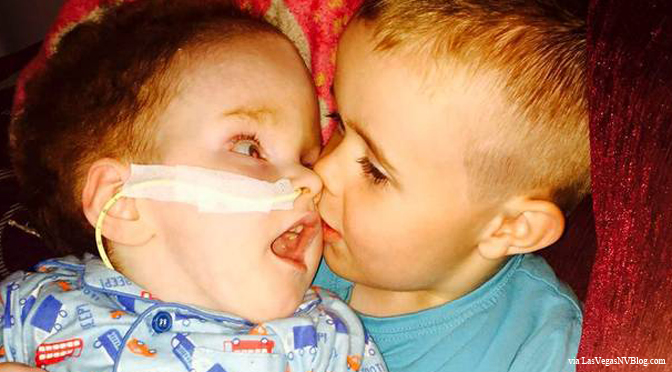 In March 2013, Emma Murray of Scotland was rushed to the hospital with what she thought was appendicitis. It turned out, she was actually in labor. But as she was beginning to process this news, she was hit with a devastating diagnosis for her son. As soon as baby Aaron was born, both the doctors and Murray knew something was wrong.

“I was foggy from all the pain medication from the birth,” Murray told The Daily Mail. “But I could still see that his head was very large. My stomach was knotted with anxiety, but all I could do was lie back and wait for some answers.” Her baby taken from her and rushed to the neo-natal unit. A brain scan showed that Aaron has holoprosencephaly, a condition in which the brain doesn’t form. Aaron has only a brain stem, which meant he could breathe and had limited functions, but doctors expected him to die at any moment, telling Murray that her son had only minutes, possibly hours to live.

“I was absolutely heartbroken,” said Murray. “He was hooked up to every machine and had a hat over his head so we couldn’t see the size of it. I just sat by his cot rubbing his little hand. I was in total shock.”

Despite the doctors predicted prognosis for Aaron, after a week in the hospital, he was still alive. He was then moved to Yorkhill Royal Hospital for Sick Children where doctors performed surgery to place a shunt in his head to drain fluid. Eight weeks later, Aaron had proven he was a fighter, and he was sent home with his mother and big brother Jack.

Aaron is now two years old and although doctors said he would never progress beyond the mental age of a newborn, he loves to giggle and clap, and he recently said his first word: “mummy.” “I was just playing with him in my front room,” explained Murray. “He was lying on his back on the carpet and I was leaning over him clapping my hands, and saying ‘mummy’ to him over and over, really drawing out the sounds. He was giggling, and then he said, ‘Mummy’. He had literally copied what I was saying. I just stared at him in shock, and then I just burst into tears. It was such an emotional moment.”

Jill Yaz from the Association for Spina Bifida and Hydrocephalus told The Daily Mail that it is “fantastic” how well Aaron is doing, since most babies with holoprosencephaly die before or at birth. Yaz says that Aaron’s life proves how much we still have to learn about the human body.

“[…] the body can surprise us and do remarkable things.” Yaz said. “[…] the fact that he has even survived is remarkable. It’s a testament to his mother’s love that he is doing so well.”

No one knows what the future has in store for Aaron, who has also begun saying “hello”. His family is grateful to have the little boy they describe as happy and cuddly. They are planning a large Christmas celebration at which they plan to give Aaron and Jack plenty of gifts to have fun opening.