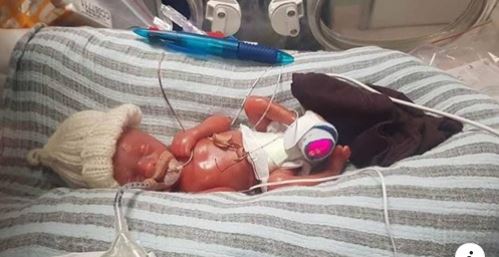 (Right to Life UK) A New Zealand baby born at 23 weeks is now 9 months old and has left the hospital.

Declan Colquhoun, along with his brother Riley, was born in March at just 23 weeks gestation. He was so small, weighing only 400g, that his aunt’s wedding ring would have fitted around his arm.

Over the next two weeks, Riley sadly lost his life, but 8 months later, Declan is getting stronger every day. He now weighs 7 kg [15 pounds].

At 22 weeks gestation, the twins’ mother Kathryn Hutchinson was diagnosed with pre-eclampsia and had to have an emergency caesarean. The twins were born so early that their eyes were still fused shut. They were immediately put on ventilators and neither their mother nor father were able to hold them.

After Riley died, the country went into lockdown and things got harder as only Declan’s mother was allowed to visit him in the hospital due to the risk of COVID-19. The father, Chris Colquhoun, was not able to see his son for six weeks.

“He was extremely fragile.”

Declan’s recovery has been a slow process. He had three surgical procedures within a week. In October though, Declan was well enough to go outside for the first time in his life. His parents took him for walks around the hospital grounds.

Last week, he was transferred out of intensive care to a special care baby unit at Hutt Hospital. He still requires oxygen and a tube to feed.

“It’s a step in the right direction,” Hutchinson said.

Born below the abortion limit

In England and Wales, it is legal to have an abortion up to the 24th week of gestation, despite the fact that babies, like Declan, can and do survive when they are born before that point.

In 2019, there were 3,675 abortions after 20 weeks. Furthermore, there is increasing evidence that babies in the womb can feel pain as early as 12 weeks gestation.

In November of this year, a large number of MPs attended a Parliamentary webinar on fetal pain hosted by the All Party Parliamentary Pro-Life Group (APPPG). It aimed to raise awareness of the need to review the science behind fetal pain and address the current contradiction in UK law concerning the treatment of the unborn.

Right To Life UK’s spokesperson, Catherine Robinson, said: “The number of babies born before the 24-week abortion limit in the UK, who go on to survive, is increasing all the time. While Declan was born alive at 23 weeks and is now flourishing, there are babies at the same gestation whose lives are ended by abortion whilst still in the womb.”