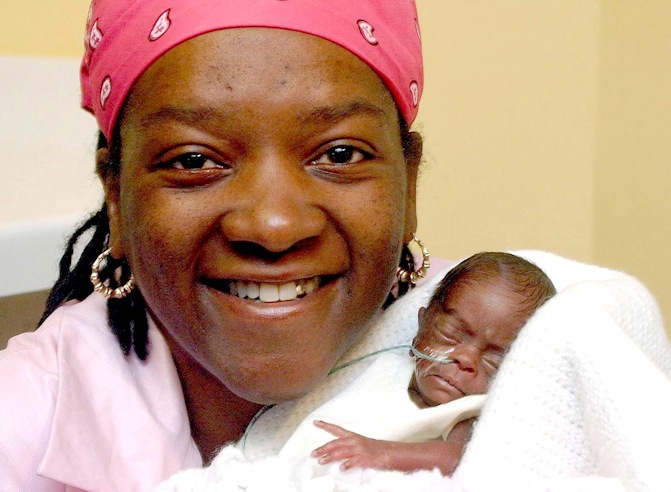 Aaliyah Hart weighed just 12 ounces when she was born three months premature in 2003. She was the smallest baby ever to be born in Britain – so tiny that she fit in her mother’s hand.

However, Aaliyah’s fight to survive began while she was still in her mother’s womb. At roughly 20 weeks gestation, Aaliyah had stopped growing, and doctors doubted she would survive. Then at 28 weeks, her mother, Lorraine Hart, went into labor. Hart and her husband, Ricardo, had been trying for 10 years to conceive, and Aaliyah was their miracle baby.

Jeff Bissenden, regional director for Birmingham City Hospital, told Telegraph after Aaliyah was born, “I’m amazed the baby did not die in the womb. I think this baby’s survival is down to the intrinsic toughness of the child, not down to anything we have done.” In 2013, The Daily Mail updated the world on Aaliyah’s progress. At 10 years old, she became captain of her school’s football team. Her mother told The Daily Mail that her daughter loves sports, and excels at running and gymnastics.

Though her confidence was low due to her small stature, Aaliyah has since caught up to many of her classmates, and her self-esteem has grown. She has been awarded tasks at school, such as being the “milk monitor,” which allows her some responsibility. “I really like playing football. It’s a lot of fun playing with my friends,” Hart told The Daily Mail. “Being the captain makes me feel very proud. I like school, but I really love sports. I know I’m a bit smaller, but I try not to let it make a difference.”

During her pregnancy, Aaliyah’s mother was told that she should consider abortion. Lorraine Hart told Telegraph that she refused to end the life of her child, and would not give up hope while Aaliyah’s heart was still beating. After only a few weeks in the hospital, Aaliyah was able to go home.

“She’s a miracle, so beautiful,” Hart told Telegraph. “She was so tiny, but she was so active. Her hands were going; she was her own little person and I cried for a long time. She was surviving – that was my main concern.”

Now, nearly a teenager, Aaliyah’s mother can be proud that her daughter not only defied the odds to survive, but is thriving, as well.