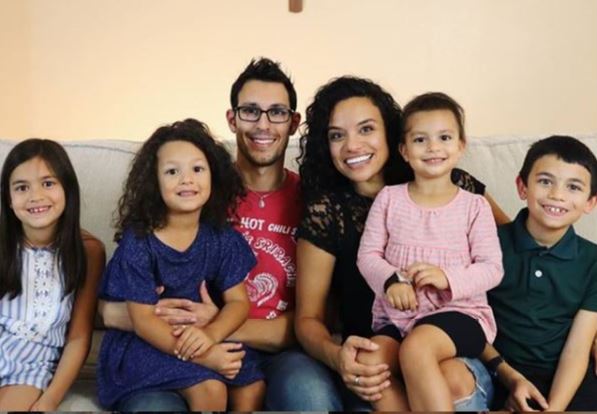 Since she was a child, Amanda Vernon has known she was meant to sing. Even after becoming a mother, as her career and her family grew, she wondered if pregnancy and motherhood would have negative effects on her goals. But with faith and support, she has accomplished her dreams — including welcoming four children.

Vernon kicked off her music career in high school when her church began a “kickstarter” for her first album. From there she began to sing in local concerts, then national shows, then international shows including World Youth Day in Sydney, Australia. At the age of 25, she was enjoying a successful career, was married, and had two children. But there was still one more dream waiting—and just as it was about to come true, she learned she was expecting her third child.

Have you seen @leah.darrow 's #babiesanddreams posts lately? So powerful. (Search the hashtag on both Instagram and Facebook to check it out!) Post after post, I've been inspired by strong, beautiful, courageous women who are speaking about the satisfaction, the sacrifice, and the triumph of welcoming new life. Here's part 1 of 2 of my #babiesanddreams story! For most of my life, one of my goals was to sing the National Anthem for the Green Bay Packers. My parents are diehard Cheeseheads, and I always wanted to combine my love of singing with my love of the Green and Gold. Finally, the opportunity arose! Not only was I invited to sing at a preseason game at Lambeau Field, but proceeds from the game benefited the Bishop's charities. Catholicism, Packers, Music. What more could I ask for?! We booked this performance about a year in advance. Within that year, I realized the blessings were multiplying. See that bump? Can't miss it, right? I was going to be 8 months pregnant by the time game day arrived! I didn't tell the Packers. 😬 I told the Bishop of Green Bay, though, in my first trimester. "I'm going to be really, really pregnant that day." He gave me a high five. Ha. I prayed that if I rehearsed the song every single day that summer–even under less than optimal lung capacity–I could do my best. Well. If singing the nation anthem while 8 months pregnant at an NFL preseason game could be considered an "audition," it must've worked. The Packers invited me back the very next year to sing again, this time for the live TV broadcast of Monday Night Football. They said, "ESPN told us to get someone good." Far from killing my dream, having a baby definitely enhanced it. Plus, it seems to have been good for the baby! At 5 years old, Mercedes is our most cuddly child. She toured with me for her first 8 months after birth. She stayed close to my chest when I gave concerts, often falling asleep in the baby carrier while I sang. Plus, she sings beautifully. Thanks for reading the good stuff! Part 2 will be about the more challenging side of #babiesanddreams . Stay tuned. And thank you @leah.darrow for starting this conversation!

“We were in the midst of a full-time tour as a family of four when we first connected with the entertainment coordinator for the Green Bay Packers,” Amanda told Everyday Mamas. She was a huge Packers fan and had dreamed of singing the national anthem at a game. Now she was being invited to do just that at a pre-season game at the home field—booked a year in advance.

“Within that year, I realized the blessings were multiplying,” the Catholic singer wrote in an Instagram post. “See that bump? Can’t miss it, right? I was going to be 8 months pregnant by the time game day arrived!”

Oh, just toting a baby around the country. And a few pieces of luggage. First concert post-Serra: success! Thank you, Indiana!

Concerned that the effects of pregnancy on lung capacity would alter her voice, she worried about how the Packers would react so she decided not to tell them she was pregnant. She did, however, tell the Bishop of Green Bay: “‘I’m going to be really, really pregnant that day.’ He gave me a high five. Ha.” When the day arrived, her secret obviously couldn’t be hidden, but she performed so well that the Packers invited her to return the next year to sing again, this time for the live TV broadcast of Monday Night Football.

“Far from killing my dream, having a baby definitely enhanced it,” she explained. “Mercedes [her new baby] toured with me for her first eight months after birth. She stayed close to my chest when I gave concerts, often falling asleep in the baby carrier while I sang.”

With my angel baby after an afternoon of recording music. It feels great to have completed my first studio session in Arizona! ✅

That moment she was so nervous about—singing the national anthem while eight months pregnant—helped her to further launch her career. Though there have been challenges along the way, including postpartum depression that lasted more than a year, she has overcome them with exercise, therapy, writing, and God.

Now the mother of four children, she co-authored her first book in 2018, and continues to sing with her husband as her manager. She said rather than obstacles in her career path, her children have been her motivation and inspiration. Thanks to her children she is “stronger, healthier and more full of energy.”