In addition to those reports, here are more cases involving the misuse of Medicaid reimbursements by the abortion corporation:

On January 23, 2017, Planned Parenthood Great Plains and Comprehensive Health of Planned Parenthood Great Plains Kansas (PGP) agreed to pay more than $18,800 for “allegedly violating the Civil Monetary Penalties Law,” according to a report published by the Office of Inspector General (OIG). According to the OIG, PGP submitted claims to Medicaid where the services were:

A 2008 Office of Inspector General report in New Jersey reveals that Planned Parenthood believes all the services they provide pertain to family planning, and thus warrant a Medicaid reimbursement, when this is not the case. The report states in part:

During our visits to family planning clinics throughout the State, many providers (especially Planned Parenthood providers) stated that they billed all claims to Medicaid as “family planning.” Officials at these clinics stated that they believed that all of the services they provided were related to family planning. Therefore, officials at these clinics often populated the family planning indicator field on Medicaid claims even though the service provided did not meet the criteria for 90-percent Federal funding. By populating this field, the MMIS designated the claim as eligible for 90-percent Federal funding.

A 2008 audit by the Office of Inspector General in that state, which found that providers incorrectly coded the 90 Medicaid claims by marking “Yes” in the family planning indicator field, said in a footnote:

Officials at Planned Parenthood providers stated that they believed that nearly all the services they provide are related related to family planning. However, the medical review determined that the providers improperly claimed, for example, services to pregnant women, treatment for sexually transmitted diseases, and counseling visits unrelated to family planning services.

In 2011, the State of New York, Office of the Medicaid Inspector General, sent a letter to Planned Parenthood of the Hudson Peconic, requiring restitution of overpayments of nearly $31,000 after reviewing claims with payment dates of January 2006 through December 31, 2008.

A New York State Office of Medicaid Inspector General audit of Planned Parenthood Hudson Picnic, published in 2011, reviewed HIV counseling paid from July 1, 2004 through June 30, 2007, and found that nearly $2,227,000 was overpaid but only repayment of just over $2 million was required. Out of a random sample of 100 services the IG reviewed, 83 had at least one error and did not comply with state requirements; a number of those contained more than one deficiency. 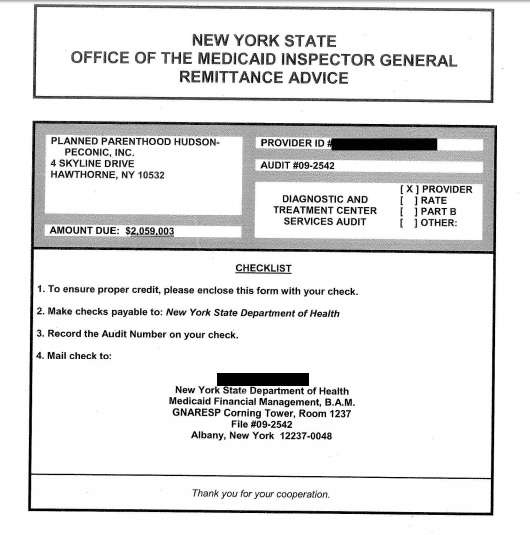 These examples are yet more proof that serious oversight is needed to guard the millions of tax dollars being sent to the nation’s largest single abortion provider every year. Planned Parenthood’s history of fraud even extends to violations with the federal 340B Drug Discount Program, previously reported here at Live Action News and at Townhall.

Despite this evidence, and after years of politicians promising to defund this abortion behemoth, Planned Parenthood is again poised to receive another half a billion taxpayer dollars in 2018.