Last week, a judge denied a motion to inspect late-term abortionist Curtis Boyd’s facility in New Mexico. Southwestern Women’s Options has been plagued with scandal: Boyd had partnered with the University of New Mexico Health Science Center (UNM) in recent years, and one of Boyd’s patients also suffered an untimely death following her abortion at his facility. The attorney for patient Keisha Marie Atkins‘ family says he will not stop fighting for justice, because he believes she was killed due to the practices of the facility. 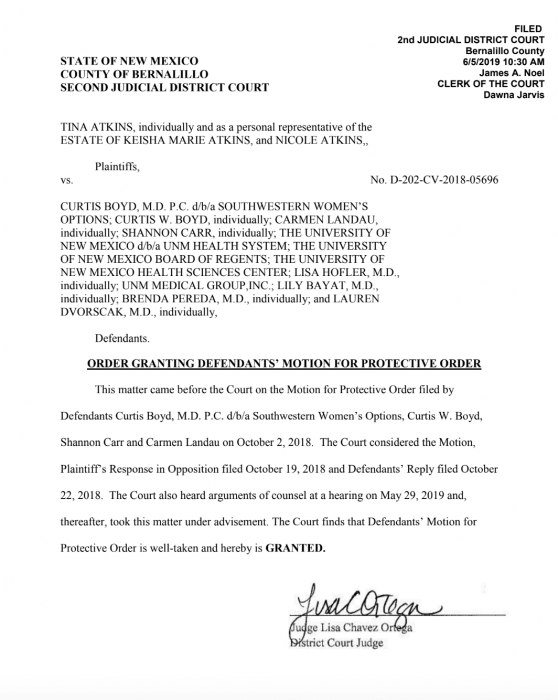 It was February 4, 2017, when 23-year-old Atkins went to Boyd’s Southwestern Women’s Options to complete the late-term abortion that was started on January 31 — a multi-day procedure. She was dead soon after. The UNM Medical Investigator autopsy reported the cause of death, as Operation Rescue reported at the time. Atkins’ mother Tina decided enough was enough and filed a wrongful death lawsuit against SWO in August of 2018, also naming Boyd and fellow abortionists at both SWO and UNM, Carmen Landau, and Shannon Carr, as well as the university and UNM Board of Regents, among several others. Live Action News reported on the story and the wrongful death lawsuit, but now Atkins’ attorney, Michael Seibel, tells Live Action News that despite a judge’s decision to deny an inspection of Southwestern Women’s Options, he has greater concerns for the future of abortion.

Seibel issues a disclaimer about himself, saying, “I’m just a street lawyer in New Mexico but I’m deathly afraid for women in our population centers.” His reasoning, however, doesn’t need a lot of disclaimer. He told Live Action News that in the hearing to see inside the facility that he needed to be able “to show the difference between the hospital and the clinic.”

Seibel explains that the defense “argued that it could be done with pictures and too much time elapsed from the incident [Keisha’s death].”

Seibel said they also argued that they had “changed” the facility so it wouldn’t be the same as when Atkins was a patient anyway, but Seibel says, “I argued we needed a baseline so that we could see how the clinic operates and to show the jury. The easiest way would be to film the clinic and then ask questions from there. The judge kept focusing on the fact that it was not a premises liability case and there was no need to go into the clinic as it was a malpractice case.”

Disappointed but not surprised by the outcome, Seibel says that the judge’s decision still “handicaps” the discovery efforts of the wrongful death suit because it deprives him of access to be able to visually show the differences between the abortion facility and hospital setting; it was in the abortion facility that Atkins came down with sepsis, he said, and showing the facility setting would help prove the wrongful death. “Without the chance to compare clinic settings to hospitals it puts my client at a significant disadvantage,” he added.

At the time of Atkins’ death, Operation Rescue reported:

An autopsy was conducted at the UNM Health Sciences Center by the UNM Office of the Medical Investigator, which also serves as the Bernadillo County Coroner. The OMI determined that Atkins cause of death was “pulmonary thromboembolism due to pregnancy,” in other words, blood clots in the lungs.

The autopsy report can be viewed here. As Operation Rescue’s President Troy Newman said then, the blame was focused on Atkins’ “pregnancy” instead of on complications from her late-term abortion. That’s why Seibel is working with Atkins’ mother to expose the truth of what happens behind the doors of that facility. The answers by the abortionists’ counsel, revealed in a separate document, are also very telling of the lack of medical care provided in this alleged “women’s health care” facility. (Live Action News will share those details in an upcoming report as well.) Meanwhile, Seibel says this dangerous practice must stop. Atkins wasn’t a random accident but a predicted problem when late-term abortion is so easy to obtain. Seibel told Live Action News:

Late term abortions must be done in a hospital. Period…. Clearly if they had constant monitoring, an on-site laboratory, an operating room, my client would have survived. The substandard conditions and outpatient procedure, in contradiction with the abortion industry’s well-established testimony in D & E ban cases, led to my clients demise.

And Seibel issues a caution to other states that are expanding late-term abortion as well. Atkins’ case, he notes, could be their future, too:

This is of particular concern for other jurisdictions such as New York. Illinois and Vermont which are embarking into late-term abortion with relatively no supervision. If they do the same thing in those jurisdictions as they do in New Mexico, more women will be injured or perhaps die.