(Save The 1) I am a person like anyone else. I am a lawyer, a National Public Accountant and an adult education teacher in a humble neighborhood of Buenos Aires, but I have a different story. My right to life was questioned, and the continuation of my life depended on the strength and tenacity of a 14-year-old girl in order that I may now tell you my story. Today in Argentina this challenging of lives is being repeated again. This time, for all unborn children through 14 weeks, and for children conceived in rape right up until birth.

People like me today are considered disposable. What was my fault so that my right to life is questioned? I did not steal, I did not kill and yet I was about to be killed in utero just for having been gestated out of the rape of a poor girl.

My biological mother, Teresa delMilagro, lived in the Itatí de Bernal emergency village in the Province of Buenos Aires, Argentina in a context of absolute poverty, violence and alcoholism. She was raped and abused by her stepfather and from that terrible situation she became pregnant with me at 14 years old. 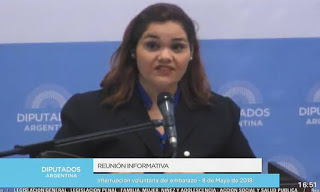 That is how 22 days after I was born I was handed over to that neighbor, who was my adoptive mother, or as we say, “heart mom,” Alicia. She lived with her husband Franklin and 21-year-old son Fran. I arrived at my new home in a deplorable state with smoky, dirty clothing, hunger, and third degree burns on my genitals.

My arrival in the neighborhood was a revolution. That day, all the neighbors joined in looking for clothes, milk and a cradle.  My new mom immediately bathed me, and I, who still did not even open my eyes, sighed with relief, as I must have felt the sense that I’d been saved.

The next day my heart mom started the adoption proceedings and, as required, a corresponding police report.

If I had to describe the relationship with my adoptive parents, the two words that would summarize our life together today would be infinite love. When I arrived into their lives, my mother was 54 years old and my father was 49. Even though they were older, they loved me deeply and shaped me into the woman I am today, with both defects and virtues, but always with the same values, impressing upon me the importance of helping the most defenseless and a profound respect for life.

The last time my heart mom saw my biological mother was when I was eight months old. My birthmother came to know about me, but she was warned of the restraining order that the adoption judge had imposed. Teresa delMilagro, embarrassed by the situation, took a baby cap from my mother, caressed it gently and gave it back to her. My heart mom always waited for her to return, but Teresa delMilagro never came back.

When I was eight years old, I learned my origin and it was hard to know, but it was always clear to me that despite the pain, I wanted to help the weakest. There were years of internal healing and I am grateful to have gone through all that, because I know now that the only way to heal the pain is with love, understanding and forgiveness.

At age 28, with my original birth certificate in hand, I decided to look for Teresa del Milagro. I needed to close my story but above all, I wanted to tell her, “THANK YOU FOR ALLOWING ME TO LIVE FULLY.”

Disappointed, I found out through a governmental search page of people, that my birthmother had died at age of 25, when I was just 11 years old.

However, I found the family that my birthmother had formed. In spite of everything, her continuous great act of love for me made her betting for life again.  I talked to them and learned that my biological mother was sadly returned to her abuser, that he attempted to traffic her sexually to other men, and, as she refused, she was admitted to a school until she was 18 years old.

I learned that she had looked for me intensely, but my biological grandmother denied her any information and then, without hope, Teresa committed suicide. I’m sure it was an impulse, as her family had said she was not like that, but that she was a fighter. In a moment of weakness, she took her own life. It hurts me to know that the lack of protection and abandonment of the State killed her. I know that if we’d met, I would have been a part of her healing. 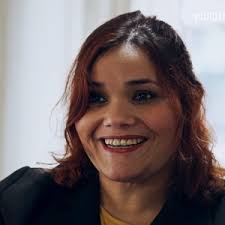 My adoptive parents did not change my original names, the names which Teresa delMilagro had given me. I have a half-brother and a half-sister who she had with her partner. The surprise was that my sister is also called Karina, like me. I knew this was a sign from my birthmother that she had never forgotten me.

Although I could not meet her, I appreciate the strong convictions she had when she was so young. According to her partner and other children, she never saw me as a trauma from rape or an aberration, but it was always the love of a mother for all of her children, to the point that she did not differentiate which of her children was gestated out of love or rape.

Teresa delMilagro did, as her name says, achieve a miracle in me because she allowed me to live and she saved me by placing me for adoption, by changing my destiny. I would not be what I am if I had not been given to my adoptive family, the best I had.

Today my parents are gone but their love for my life transcended theirs — the proof of which are my sons, Manuel and Martín. They are here today because my three saviors said Yes to my life! And now, I fight to say yes for others who are just as deserving of love and life.

Tuesday, May 8, 2018 was not just any day in my life, but it was the day I shouted to the four winds: ALL LIFE IS GOOD! in the Chamber of Deputies of the Nation. All the pieces of my puzzle called “Life” were perfectly embedded. My sad origin and my experiences over the years would serve to defend the lives of the purest beings in the world — unborn children, those who have no voice and cannot defend themselves. I related my story to the legislators, then showed them the purpose of it.

“My story comes to an end, but not before asking you: Could you dare to tell me that your life is worth more than mine because I am the result of a rape? I hope you are clear that the mother and child are victims of the rapist and that is why you have to protect them. No one has the right to say that one life is worth less than the other, much less that of the fruit of a rape, because that baby did NOT CHOOSE HOW TO BE GESTATED. If the rapist, with luck, is sentenced to 15 years in prison, why is the innocent baby sentenced to death? Without life there is no freedom. Value life and defend the unprotected, sow love, sow peace, sow life, honor life!”

I will not stop fighting to prevent abortion from being legalized in my country. I will not stop because I have a debt to life.  Teresa fought for me and gave me an opportunity to live, and now it’s my turn to fight back to ensure that every human being is guaranteed his or her first and most precious rights: the right to live.

BIO: Karina Estrella Etchepare is a wife, mother of two beautiful children, and a family law attorney and accountant. She combines her professional work with intense pro-life activism, speaking publicly at every opportunity. Karina is a blogger, page editor and pro-life speaker for Save The 1′s Spanish team, Salvar El 1.