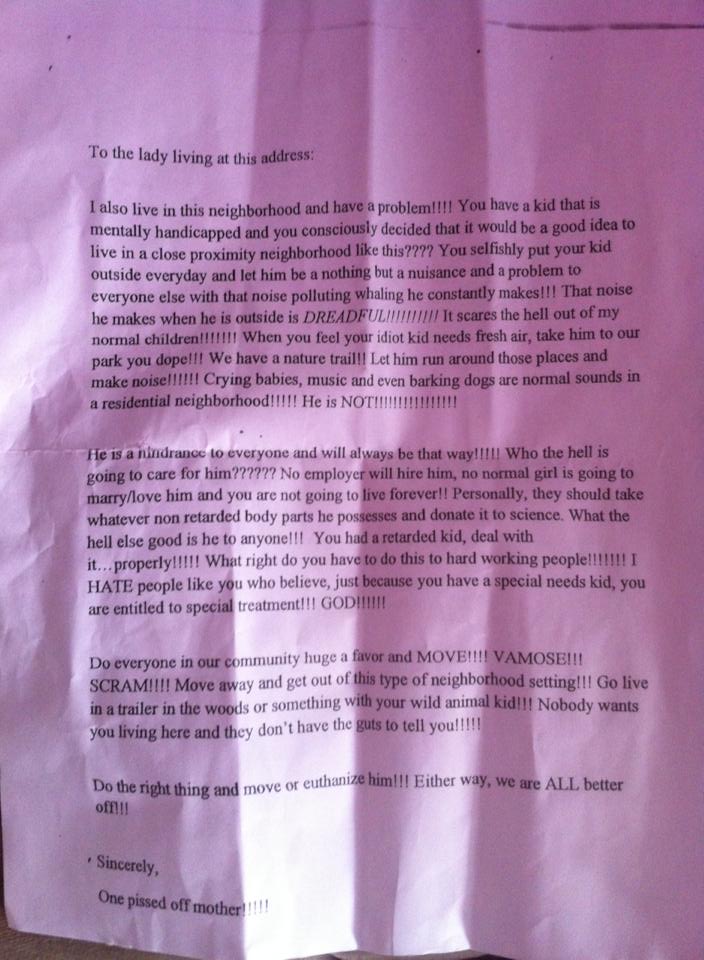 The letter to Max’s mother.

A recent anonymous letter to the mother of a 13-year-old autistic boy named Max has been gaining a lot of attention on social media this week – and for good reason. The letter, sent by a neighbor, does a phenomenal job of showing us all how our society has come to devalue life and to treat our fellow human beings as disposable. Those involved in this story live in Ontario, Canada.

Much like in the United States, abortion in Canada has few to no restrictions or gestational age limit. As proven by this letter, many people on either side of the border hold the belief that some lives are better and more worthy of living than others.

The author of the letter, who calls herself a mother of “normal” children, writes some extremely cruel comments, including:

That noise he makes when he is outside is DREADFULL!!!!!!!!!! It scares the hell out of my normal children!!!!!!! When you feel your idiot kid needs fresh air, take him to our park you dope!!! […] He is a hindrance to everyone and will always be that way!!!! […] Personally, they should take whatever non retarded body parts he possesses and donate it to science. What the hell else good is he to anyone!!! You had a retarded kid, deal with it…properly!!!!!

A quick Google search would have enlightened the writer to the fact that the noise Max makes is likely stimming, slang for self-stimulatory behaviors. People with autism make repetitious movements or noises such as rocking, squealing, or head-banging in order to calm themselves. Temple Grandin referred to stimming in Autism Asperger’s Digest back in 2011, saying that the act “may counteract an overwhelming sensory environment, or alleviate the high levels of internal anxiety these kids typically feel every day.”

Nevertheless, the woman goes on to tell the family to move, referring to the boy as a wild animal kid. She then tells the boy’s mother, Kara Begley, to euthanize him.

Now, many people – friends, family, and strangers alike – have come out in support of Max and his mother, as they should. Thousands of Max’s supporters are outraged at the suggestion to “euthanize” him, and rightly so.

However, how would they react if the woman behind the letter had suggested that the boy should have been aborted? Prenatal testing can determine if a child has Down syndrome, cystic fibrosis, a cleft lip, or even if a child is at risk for autism. This now raises the question: should autism be eliminated or “cured” through abortion so that it never gets to this point – the point where a frustrated neighbor lashes out against an innocent child?

I sincerely hope that anyone who views this letter as evil and hateful also realizes that the act of aborting a child with autism – or any other condition – is equally evil and hateful.