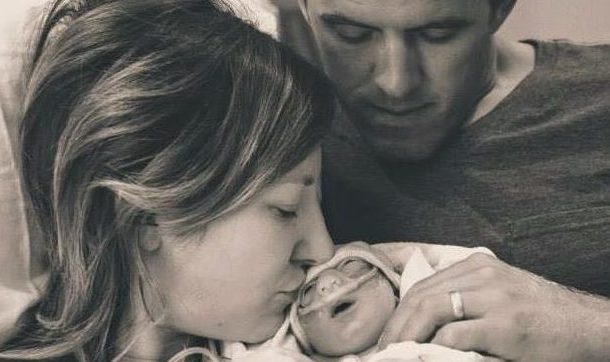 Diagnosed at her 19-week ultrasound with anencephaly, a condition in which the top of the preborn child’s head is missing, Annie Ahern’s parents carried their baby girl to term, and because of that, she became the first infant organ donor in Oklahoma.

Her parents, Robert and Abbey, were heartbroken to learn that their third child was not going to survive after her birth.

“The worlds ‘incompatible with life’ just sucked the air right out of my lungs,” explained Abbey Ahern to Good Housekeeping. “I knew what he was saying, but I couldn’t really apply it to us or to our baby.”

Already parents to two little girls whom Abbey Ahern says were difficult to name, the couple had no trouble naming Annie immediately after her diagnosis. Annie means “grace” and her parents say they knew that their baby girl’s life had value.

“We knew she had a purpose – even though she was not made for this world,” said Abbey Ahern.

The couple learned from their doctors that about 95 percent of women enduring such a diagnosis choose to abort. However, they decided to carry Annie to term.

“I am fortunate enough to have an incredibly selfless and supportive husband, a faith that kept me going when I wanted to fall apart, and two healthy and vibrant daughters to hug when I couldn’t stop sobbing,” explained Abbey Ahern. “I was also fortunate that doctors also told us Annie was unlikely to be in any pain.”

She said that not everyone could understand their decision, with some wondering why they were delaying the inevitable and why they just didn’t “get it over with and terminate”. She said her own sisters called her “crazy”.

But the couple was undeterred, and Abbey Ahern thought of a way that Annie could make a difference in her short life. She asked the doctor about the possibility of Annie becoming an organ donor since everything about her was healthy, except for her skull and brain. The doctor wasn’t sure but agreed to look into it.

This is one of the very first pictures of Annie. It is so strange to look at her precious body, before all of her wires and monitors were attached. All I see is perfection. Perfect little toes, perfect chubby legs, her perfect tight little fist shoved into her perfect little mouth. Her only imperfection was the top of her head, and it would end up stealing her from us. May 15 is anencephaly awareness day, and my heart is with all of my anencephaly mom friends I’ve met through social media over the years. Thank you all for being there with me, and for sharing your hearts and support. ? #anencephalyawareness #pistolannieahern #sarahlibbyphotography #anencephalyawarenessday #organdonor #donormom #donatelife

What they learned was that there had never been an infant organ donor in the state of Oklahoma, and to make organ donation possible for Annie, her oxygen levels would need to be kept up. They came up with a plan that would hopefully allow the family to hold Annie and spend time with her while still keeping her oxygen levels high enough to donate her organs when the time came.

When Annie was born via C-section, she was breathing and pink. Her mother was able to hold her as soon as she was stitched up after the C-section.

“That moment, I felt lighter than I’d felt in five months. I remember holding her hands and pressing my face on hers and smelling her. I couldn’t kiss her enough. When I was pregnant, I was worried that everyone would be there and I wouldn’t want to share her and I’d feel guilty. But what happened was that I just was so proud of our girl. She wasn’t mine to keep,” explained Abbey Ahern. 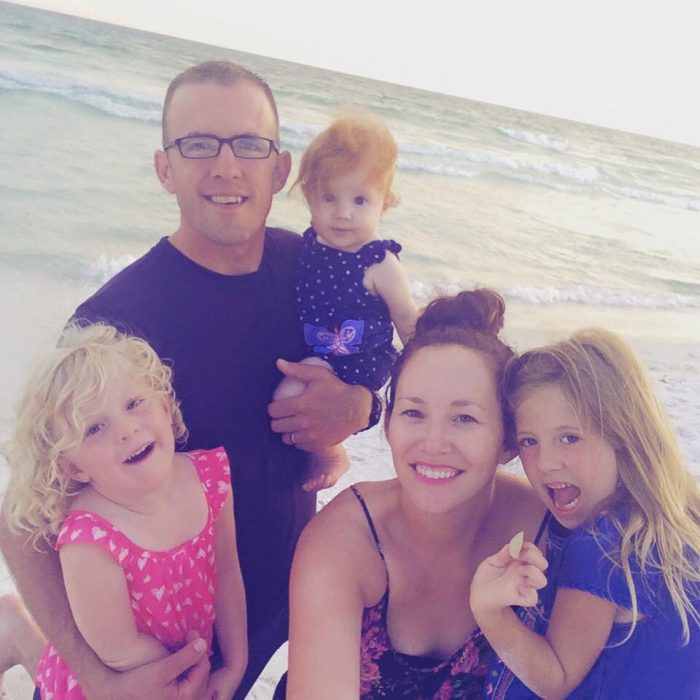 According to Abbey Ahern, no one was sad. Grandparents, aunts and uncles spent time loving Annie, and her big sisters got to kiss her and listen to the book Heaven is for Real – a story Annie’s biggest sister Dylan had chosen.

Doctors tested Annie to ensure organ donation could be done and then they took her off of the oxygen to see what would happen. Her oxygen levels did begin to drop and she began to turn purple. But then, a miracle, as her mother explains:

We thought she was going. I told Annie it was okay, she could go, and I love her. But I was lying – I wasn’t ready. Miraculously, she stabilized. Time slowed down.

It wasn’t until about nine hours later that Annie began to gasp, and her parents knew that she was leaving them. She died peacefully in her mother’s arms. However, her oxygen level had dipped for too long, and her organs were not able to be given to another child. But Annie was still able to give. Her heart valves and organs were donated for research, and while it was a disappointment to her parents, they know that Annie’s gift will impact more people than they will ever know. After Annie’s organ donation, a new protocol was enacted so that other infants would be able to donate their organs in the future.

May is anencephaly awareness month. I’m not really sure what that means for me, if you are my friend on social media you are likely already aware of what anencephaly is. So, boom. I did it. You are all anencephaly aware. I guess what it means for me is more frequent thoughts of and more intense longings for Annie. I was looking through @sarahlibbyphotography ‘s photos and there are distinct memories associated with several of them. I thought I would share some of them this month. I will forever cherish the short time Dylan and Harper Lou spent with their sister. They each had the most perfect interactions with her, no one was afraid or shy, and it was the sweetest and most heartwarming thing to witness. Just look at all that sista love. ❤️❤️❤️ #pistolannieahern #anencephalyawareness

The family took their time grieving Annie and healing as much as they could from their loss. On Annie’s first birthday, they had an ultrasound of their fourth baby girl. Still grieving Annie, Abbey Ahern turned to grief counseling. She knows now that her old self is gone and she thanks God for that.

“Annie’s story is one of hope. I think it shows people that in the midst of tragedy, there can be beauty,” she explained. “Annie was not ours to keep — her story was meant to be shared, and I intend to do so until the day I die.”

But Annie’s legacy doesn’t end there. Her mother was inspired by a friend on Facebook to ask people to do random acts of kindness in honor of Annie. She printed out business cards for people to hand out when they did something kind and asked them to share their story using the hashtag #pistolannieahern. They went through the first 500 business cards in just a day.

“I will always look back on that time and that day with such joy because it was one of the most beautiful days of my life,” Abbey Ahern told Fox 25 of Annie’s birth. “And that’s amazing that you can say that about the day you lose a child.”

Anencephaly awareness… I’m still trying to figure out what that means for me. It’s not a disease. We don’t need to rally and raise money for a cure. It’s a birth defect. It just happens. Like other neural tube defects, it’s multifactorial. The only discernible link to a cause is a folic acid deficiency. To protect any future children I take 100 times the “normal” dose of folic acid every day, just in case. My personal “awareness” campaign this month has not really been about anencephaly. It has been about loss. It has been about love. I want to make my world aware that when someone suffers a loss, whether it be a child, a spouse, a sibling, a parent, a friend, long after the world moves on, we are still here. Still hurting. This photo was taken by my husband, moments after Annie died. I SAW her leave, so I was very aware that her little body was just a vessel. I clung desperately to that vessel, and I find myself looking at this picture and wishing I could hold her one more time. This photo hurts just as much today, almost 3 years later, as it did the day it was taken. I have recently realized that this journey will likely never end. Her absence is everywhere. The pain ebbs and flows, but it is always present. If someone you know has experienced loss, here is some advice: -call them, even if you are worried you’ll bother them -if you aren’t a phone person (who is, these days) text them and let them know you are thinking of them -show up with food (or, even better, booze) -ask them how they are doing -don’t ever hesitate to say their loved ones name, or ask questions So many of you have done some or all of the above for us, and that has helped to heal our hearts tremendously. There have been many genuine moments and heartwarming conversations that never would have happened if people worried about “spoiling the mood by bringing it up.” Even this #anencephalyawareness outlet has allowed me to breathe new life into our daughter. She was meant to be shared from the moment she was created, and I am beyond proud of the work she has done. Thanks for letting me over share. ❤️ #pistolannieahern #anencephalyawareness

In a post on Instagram, Abbey Ahern said that the pain of losing Annie is just as strong today as it was on the day she was born and died. She wants other people who know someone who has lost a loved one, especially a child, to know that that person’s pain will always be present. She advises others to call, text, show up with food, and never ever be afraid to mention the name of the person who has died.

Annie lived outside the womb for just 14 hours and 58 minutes, but she lives on forever because of her parents’ choice to carry her to term, donate her organs, and spread kindness in her honor.