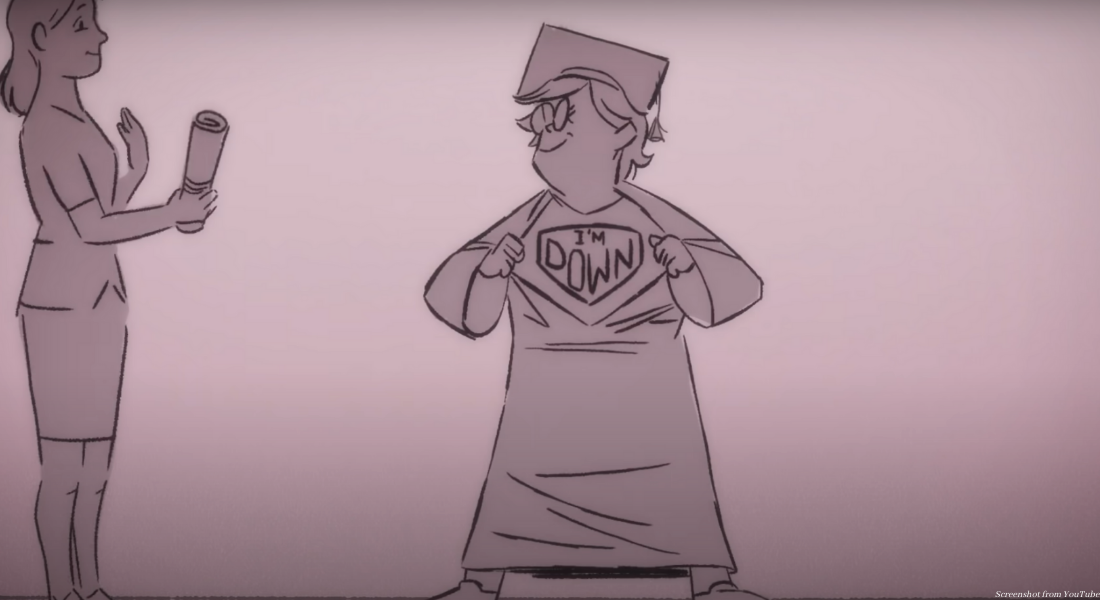 Disability advocacy group L’Arche Canada has teamed up with Jordan Hart to create the first ever animated music video to feature someone with Down syndrome as the protagonist.

“Freedom” follows the life of a man with Down syndrome, starting as he’s an adult taking care of his elderly mother. It then flashes back through his life, starting when his mother was pregnant and found out he would have Down syndrome. His mother was told to put him in an institution and his father abandoned them, but his mother never stopped loving and caring for him.

Together, they tackle the hardships that come with childhood and life as well as the good things. When the young man with Down syndrome graduates from high school, the entire auditorium erupts into applause, with his father finally present. He goes on, with his mother’s support, to propose to his childhood sweetheart and get married, where his father writes his mother a note on a wedding napkin: “You were right. He’s perfect.”

At the end of the video, several people with Down syndrome who have achieved remarkable things are spotlighted, like Claude Kitogo, a Kenyan pastry chef, and Linda Slinger, a Canadian woman who survived being institutionalized. But most touchingly, it highlights a French man named Christophe Pierrecourt. “Never learned to speak, accomplished nothing fancy,” the text reads. “But… a life well-lived.”

Canadian artists collaborated with L’Arche Canada to create the video, which they hope will allow people with disabilities to see themselves in it. Canadian actor Nick Herd, who has Down syndrome, served as the model for the young man with Down syndrome in the video, as well as the video’s creative director. “I actually loved the whole thing right away,” Herd told CTV News. “When I first saw the character [in the video], Jonathan, I just loved him right away, and it was perfect.”

READ: Mom publishes diary to share the good things about parenting a child with Down syndrome

Alison Maclean is the mother to 18-year-old Noah Bell, who also has Down syndrome, and she said it’s been extremely meaningful for the both of them.

“He laughed and smiled the whole time the first time I showed him, and as soon as I said ‘Is this someone like you?’ yeah like he’s excited. I think it’s an eye opener, and it just speaks to what they’re able to do and focusing on their abilities, instead of what they can’t do,” she said to CTV News. “Being different is great, and just because you’re different, doesn’t mean that you’re not any less capable of things like going to high school or going to university or living independently or having a job. I think it’s great to show abilities and inclusion and celebrating difference. That’s where this world needs to go is embracing it.”

And the message at the end, with Christophe Pierrecourt, is one of the most powerful. Often, people with disabilities have to prove their worth to the greater society, as if accomplishing something spectacular is what makes their lives worthwhile — or if they don’t, then they’re simply a burden, or not as valuable to the world. Yet a person doesn’t need to do incredible things for their lives to have meaning or dignity, and that’s true even for those society tends to overlook.

“You don’t have to accomplish anything fancy, your life is well lived,” Michael McDonald, the communications coordinator for L’Arche Canada, said. “You’re just free to be you. I think that’s the message.”