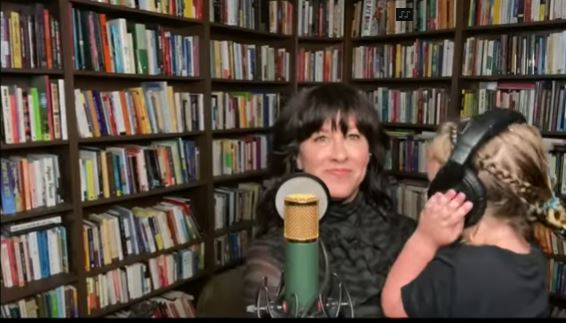 Canadian-American singer, songwriter, and producer Alanis Morissette debuted a song from her brand-new album “Such Pretty Forks in the Road” on “The Tonight Show with Jimmy Fallon” on July 30th. In her arms was a special guest who stole the show: her daughter, Onyx, demonstrating that far from ruining a performance, meeting, or task, children’s beauty and innocence can enliven and brighten the otherwise ordinary circumstances of daily life.

“Such Pretty Forks in the Road” is Morissette’s ninth studio album which comes eight years after her last, in part, she told Rolling Stone, because she has been focused on raising her children. Due to the pandemic, she performed her song “Ablaze” in her home library.

Onyx, wearing her mother’s headphones, added colorful commentary throughout the song. Just before she began singing, Morissette sounded like every mom ever as she told Onyx, “Let’s not kick that [the mic stand].” After the first verse, Morissette paused for a split second to ask, “Is it too loud?” to which Onyx responded by shaking her head.

A little bit later, Onyx said, “Hi, Mom,” and Morissette responded “Hi, baby” before launching into the next lyrics. At the end of the song, Onyx precociously told her mom, “You can keep going,” and then changed her mind saying, “OK, you can stop.”

On “The Tonight Show’s” YouTube page, the video has been viewed nearly one million times to date, and many commenters were touched by Onyx’s presence. One wrote, “Alanis singing about lovingly raising her daughter, and her daughter interrupting, giving us a small window into her relationship and parenting, brings a warm smile to my face. What a great mom.”

Another said, “One positive thing that this damn pandemic has done is shown the normal aspects of some celebrities. I love how this is Alanis, with her daughter as is. Not perfect audio. But a perfect experience. No excuses needed. Thanks Alanis.”

Morissette’s love for her family is evident in her voice, and beyond the cute factor of her daughter’s impromptu appearance, it’s clear that the experience of motherhood has enriched her singing and performing.

While most moms aren’t famous singers, certainly many can relate to a child interrupting a visit with a friend, a meeting, or another important task. Just like Morissette on “The Tonight Show,” moms can and do take it all in stride, showing their strength by taking care of their families while at the same time pursuing careers.

Moms and dads across the world can relate to wanting to “keep the light in your [children’s] eyes ablaze.”